The life of my father Kar Ming Wong

1942 Born Wong Kar Ming Oldest of 5
1945 Almost dies in village due to dental complications
1948 Kidnapping threat moves the Wong family to the city of Guang Zhou (then a relatively small city)
1955 Government takes away family business, and publicly humiliates Karming’s father. Family is forced to destroy ownership titles of land and other assets. Schools are officially closed and kids are transported to the countryside to work on farms. Family barely survives on government food rations.
1960 Karming escapes China and walks for 3 days to Hong Kong. He first finds work on a construction crew demolishing buildings, then works for the HSBC bank, and finally becomes a fire fighter on the island of Lantau.
1967-1972 Karming first travels to Thailand where he ordains as a Buddhist monk, then travels to Korea, Japan, India and Nepal studying Buddhism
1973 He Meets American Leroy Miracle at the Stupa in Boudha Kathmandu, this opens the door to a sponsored  America trip through the movie star Leigh Taylor Young
1973-1975 Lives in Beverly Hills, Idylwild, and Bay Area. Becomes chauffeur of Tibetain buddhist Lama and drives around the country,
1976 Meets my mother Alicen Diane Clark at a Buddhist teaching in Oakland, CA
1979 Karming and Alicen are married and move to southern CA

1980-1989 They have four children Evan, Julian, Tai and Lucy
1992 Karming takes whole family on a 6 month pilgrimage of Nepal, India and Sikkim Evan, Tai and Lucy are hospitalized for 4 weeks in Hong Kong with Typhoid Fever and T.B
1993-2006 Karming continues to travel annually to Asia
2006-2008 My last trips with Kar Ming. I accompany him on four separate trips to Asia, we travel to Mongolia, XinJiang, and extensively throughout China.
2010 Lucy and Karming travel to Cambodia, I take a hiatus from work in Santa Monica to bring him back from a hospital in Guangzhou China
2011 Karming passes away

I am always hesitant at the beginning, and in a way scared to leave what I have. There is not much. Since my fathers death I have been working with my mother selling his assets as well as preparing the family home in Southern California for rent. Things are almost complete and in the next month I won’t have much left except for a few bikes and my cello. Soon the house will be rented and there will be strangers sleeping in my room.
In a way I have been preparing for this trip since I started cycling. As a boy I would ride my hot wheels in circles around my parents house pretending I was on a long distance trip around the world, in my adolescent years, to get away I would ride my bmx bike to the top of the hill and gaze out at the undeveloped land. Not much has changed, and since I have conjured up the idea for this trip I have been hesitant to commit to any future plans.

This is definitely a big trip, but I have to do this so I can get along with the rest of my life, otherwise it will constantly be in the back of my mind and I will always think about what it would have been like doing it. I just hope that the work that I have done for my family will help them when I am gone, and if I don’t come back that the time spent with my mother will have been enough.

My work here is almost complete, and it is exciting to think that soon I will be departing my home town of Murrieta on 20,000 km journey to China with my fathers ashes.  Due to my delayed departure time. I have decided that I will fly from Florida to the Scandinavian city of Bergen in Norway. Spain and Portugal will be too hot, and after a 2,000 mile tour of the Southern of the United States in the early Summer Scandinavia will be a much needed break. My Alaskan trip was a great introduction to the land of the midnight sun. By the time I get there I should have close to 24 hours of sunshine. From Norway I hope to cycle east to Sweden, Finland and on to Russia. In Sweden I plan to take a small detour to the city of Orebro to look for my lost maternal ancestors.

In the last months I have been avidly practicing Ashtanga yoga and I plan to balance each days riding with an hour and half of practice. This is the theme for the first leg of the tour, “person practice and travel”. I have mapped out all 4 of the Ashtanga studios in the southern United States, as well as several Vipassna meditation centers. If I can’t find a studio or a mediation center I will keep up with my personal practice daily. My father had a very devoted practice that he maintained throughout his life, and it wasn’t uncommon for me to come home from a party and see him meditating in the shrine room late at night. When I was a kid he would make my siblings and I sit in lotus position for hours and study Tibetan mantras. I remember being a bit shocked when I learned that my friends in grade school didn’t have similar experiences.

I have not extensively ridden my bicycle since the Alaska trip, and I have lost a bit of weight while constructing my mothers new house. When I was a senior at UC Santa Cruz I weighed close to 200 pounds and would often ride my bike to and from parties in the early hours of the morning. At that time the only thing that I needed to buy at the grocery store was butter. The trailer park had a constant supply of dumpstered bread and as long as you had butter toast was always a great meal.

The beginning of this trip is going to be really difficult and I will need as much support as I can get. I will be in Los Angeles in early May and would love to see everyone before I depart.
With all of the obstacles and plan changes I am on my way to leaving on a Wednesday in mid May. As a marker of time I have noted a few of my current and past favorites/achievements.

Age: 29
Favorite food: Chips and guacamole, raw cheese and raisins, popcorn with yeast, Raw kale with peanut butter (try it)
Most I have ever eaten: Two PB J’s, a half pound of chips, a whole cereal box of granola, two bananas and a large can of soy milk, ( I didn’t say that I wasn’t sick afterward, Alaska tour)

Weight: 155
Most miles cycled in a day: 160 Glennallen to Wasilla, AK (Sara Palin’s home town, the best thing there was the “Outlaw whiskey distillery)
Hottest temperature cycled in: 105 F (this is a normal summer day in So Cal)
Coldest: 15 F, (I actually think I accomplished this by setting up a stationary bike in a walk-in freezer)
Last dream I had: A game show host told me not to install engineered hardwood flooring at a 45 degree angle
Last job that I did: Pulled out 20 years of insulation filled with rat feces/urine, waste filled abs pipes and phone line from under my families mobile.
Cups of coffee a day: 3, two with ice (no milk)
If i had a million $ I would: Still go on this tour, but I would take a caravan of kittens to keep my company 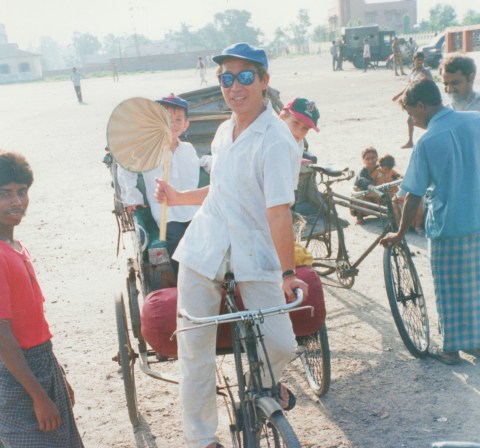 My last cycling trip with my father Northern India 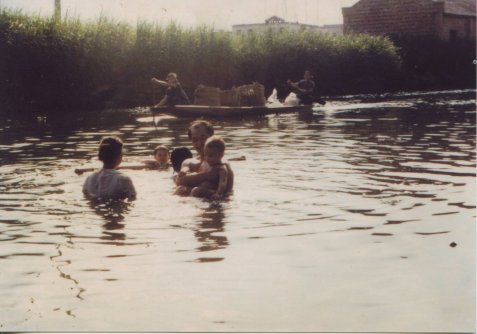 My first bath in my fathers home village of Shatou, a few hours outside of Guang Zhou 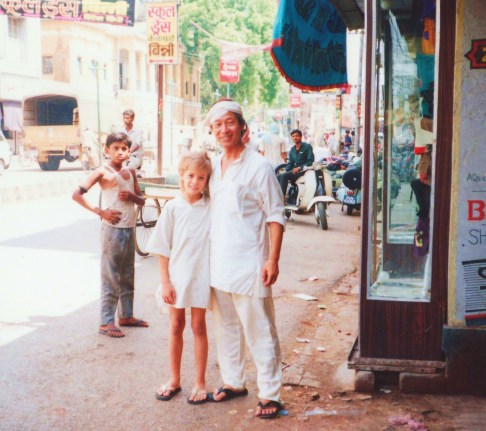 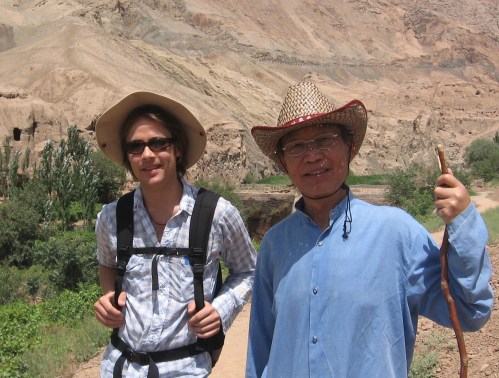 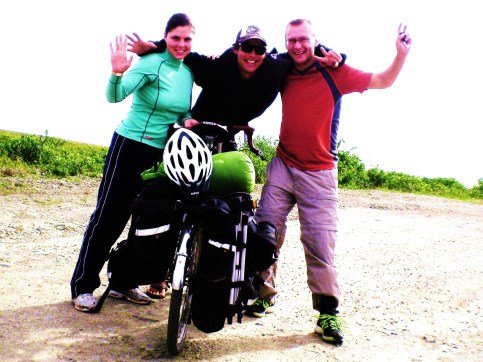