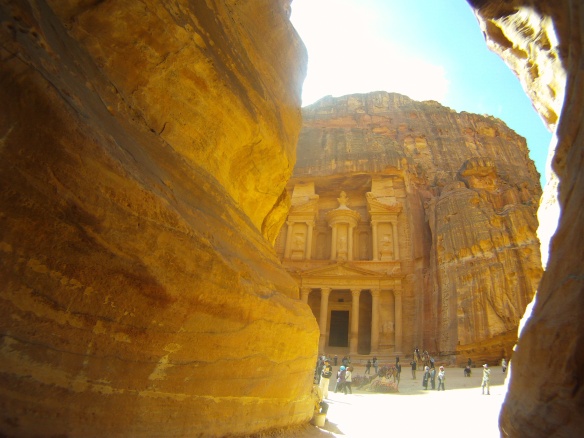 Greek style columns adorn many of the Petra structures

I crossed into Israel completely shocked by a western culture, sun bathers, men lifting weights on pristine beaches and women in bikinis reading fashion magazines. Crossing the border wasn’t easy and because I neglected to take off my head scarf I was taken into an interrogation room. Thoroughly questioned about my purpose of visit, every response seemed to draw more suspicion, and finally, after making notes in the computer, they welcomed me into the country. 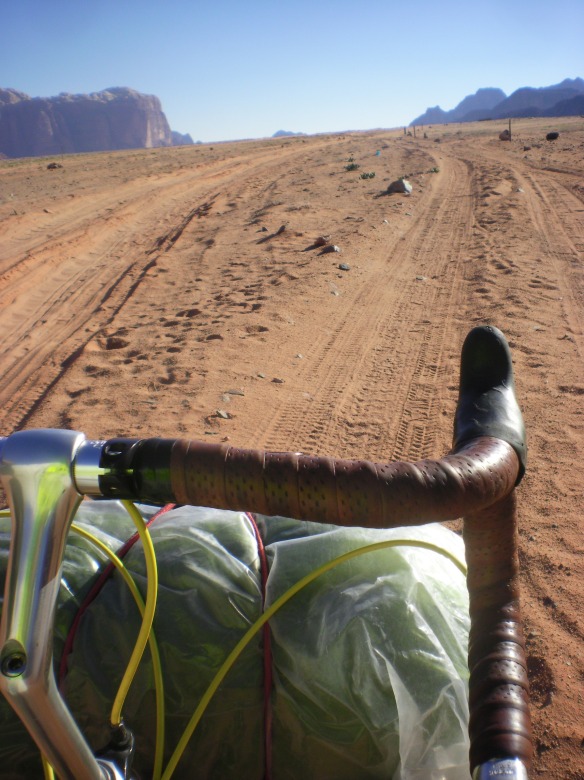 Israel is about 4 times as expensive as Egypt, putting it inline with the States. Headscarves, so popular in Egypt by men and women alike, were replaced by “Yamakas” and the ever-present Muslim forehead callous, a very respectable mark made from praying 5 times a day, was replaced by frowns as I asked locals where I could buy fresh vegetables and fruit at a reasonable price. I spent my day’s allowance on bread, coffee and humus then retired to a secluded bio-mass dump to sleep. The next morning I packed up and headed to the Jordan border, I am not quite ready for the western world again. Israel charges a $30 dollar tax to cross into Jordan, and after paying the hefty fee they warned me that I might not be allowed to enter with a bicycle and that the tax I paid was non-refundable. (How sweet). I caught the Jordanian customs officer during his morning prayer, and was greeted with a smile when I presented my passport. “I have never met an American who come to Jordan by bicycle, most German, French and Swiss cyclist, American are too lazy to ride, and like to ride in air condition bus”. I am not sure if the officer was intentionally trying to dis me, or my home country but please let it be known that I am giving us, non-lazy Americans, a good name/reputation in the Jordan and the rest of the middle east.

I pedaled into the port city of Aqaba, passing several military check points along the way. Aqaba literally means difficult in Arabic, and the city has a long history of being conquered by Arabs, Ottomans, Christians and other warring tribes. Evidence is apparent in the ruins of several ancient Mosques and the remains of the oldest-purpose built Christian Church. My first impression of Jordan/Aqaba was a “classy” middle east.  Saudi Arabia is only 20 km from the city, and all over I was constantly passed by beautiful, vintage Mercedes Benz’, Rolls Royce’, and the occasional Bentley. (all of course sporting the Saudi license plate). Middle aged men and women walked the sidewalks wearing beautiful handmade silk robes and vividly colored burkas, and families had catered picnics on the turquoise watered beaches.

I pedaled to the local “food street” and found venders selling spices, vegetables and fruit in the back of pickup trucks. All in all I purchased two dozen pita bread, half a kg of hummus, 1 kg of pasta, vegetables, 2 boxes of juice box cheese, 0.5 kg of honey cake and a kg of raisins all stuffed in my rear left pannier. I was stocking up for the southern Jordanian deserts, and hoped that it would be enough to feed me in and out of Wadi Rum (a nature preserve about 100 km away). As I was pedaling out of the city a local coffee roaster drew my attention, fresh Yemen coffee with Cardamom, from the city of Mocca,$3 a pound. I stuffed it in with the rest of my supplies and pedaled a long, windy highway, teaming with semi trucks out of the city.

Too sandy to ride, I carried 6 litters of water, my tent, and sleeping bag over 30 km shopping style 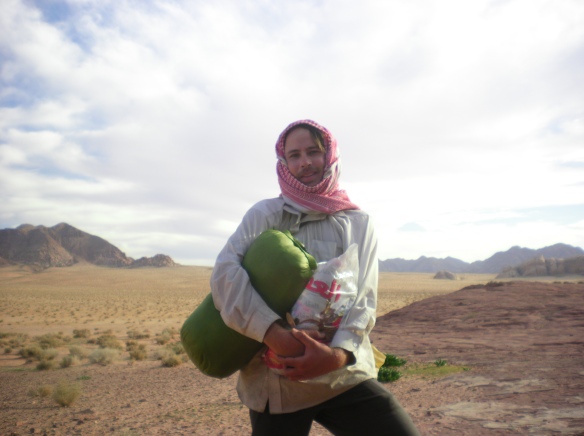 The only thing that you can’t buy at an REI or camping equipment store is the most important thing, will power. Pannier over my shoulder, sleeping bag and plastic bag full of water I walked over 30 km in the sandy deserts of Wadi Rum

Aqaba lies at the bottom of a huge alluvial fan, and the climb out was like escaping from a whirl pool. Since arriving in the middle east I have this constant fear of running out of water. Distances between cities can sometimes be over 100 km, and the dry desert terrain leaves little hope for survival. The whole Jordanian country is one large desert with the only natural water is the Dead Sea. Some towns have salty wells and water has to be trucked in. Pedaling up steep passes Gaby lurched and shimmied with the weight of 6 litters of water. The sun fell behind a large rocky butte and traffic ceased. I turned a sharp corner saw a long line of cars and trucks parked on the shoulder, misalayas (prayer rugs) were rolled out on the desert floor, and all the inhabitants were praying into the sunset. This truly is a beautiful country. 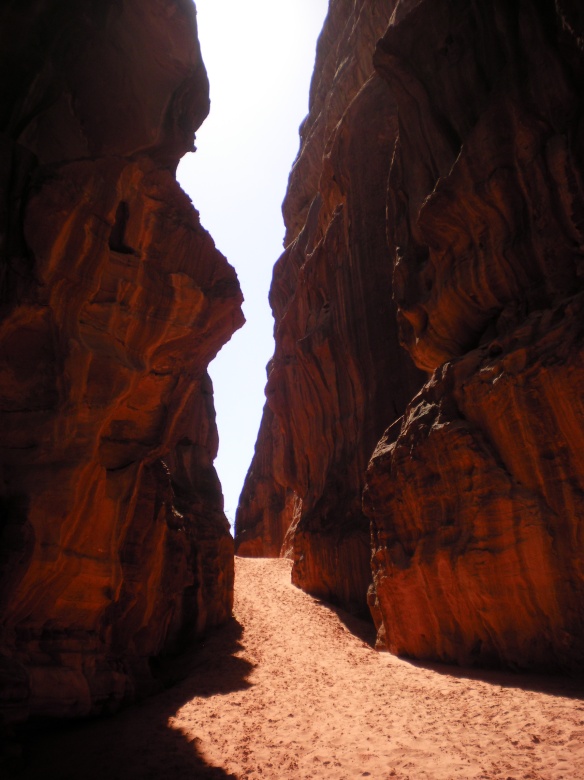 4,000 year old petroglyphs found in the canyons of Wadi Rum

Arriving in the village of Wadi Rum, the last inhabited village before the nature preserve, I was constantly hassled by locals trying to sell me a 4×4 off-road tour of the canyon. “Why would I want to ride in your stinky jeep when I can pedal peace”? They wouldn’t take “no” for an answer so I pedaled away with several Bedouin chasing me into the desert. I pedaled a few km and was forced to push Gaby through the thick, hot sand. The vast canyons and remote landscape of Wadi Rum was such a paradise and just what I needed to unwind after an intense few days. “Most tourists get stuck at Petra, to look at what man created, little tourists come to Wadi Rum, which was created by God” said a local Bedouin. I pedaled, pushed and walked throughout the park and stayed 5 days in almost complete solitude.  After the first few days I ran out of water but met a few Bedouin villagers who gladly replenished my supply and offered me sweet tea in their tent. We drew pictures of animals in the sand and exchanged names. Getting foo, on the other hand was not as easy and soon I was eating bread crumbs and pure sugar. The last two days I ate nothing but sugar, sesame oil, and curry spice, not a very good diet on the stomach but it at least it kept the hunger pangs a bay.

Gaby was more than happy as she got the “royal” treatment. I carried her more than half the time through rocks and sand in the preserve

After a long, hard two hours of pushing Gaby through the sand, I pedaled back to the main road and had another long, busy climb to the Petra crossroads. Now at elevation, a cold wind, chilled my desert worn body and I spent a freezing night listening to the wind batter my tent. At first light, after striping down and changing clothes in full view of the tourists passing in large group buses, I pedaled to the ancient city of Petra. 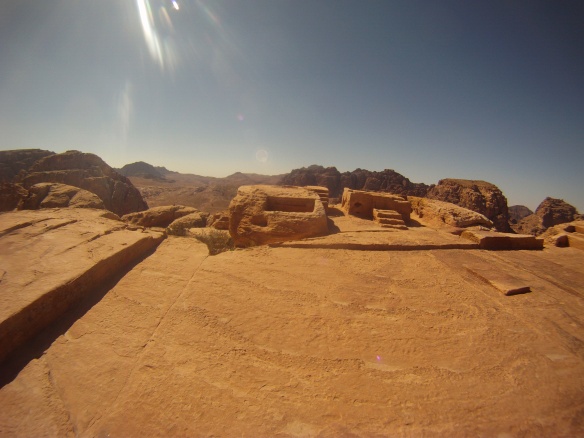 Sacred sacrificial altar at the top of a steep mountain, Petra 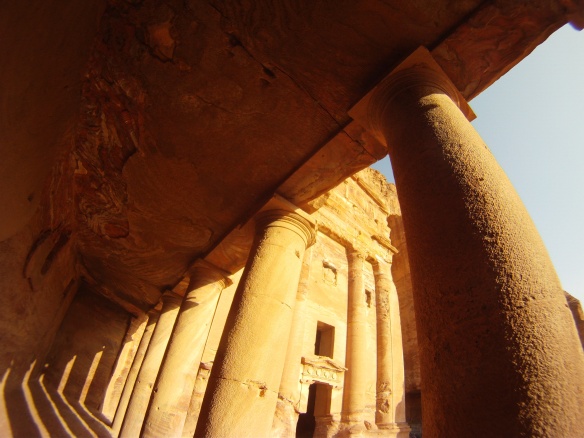 Petra is a marvel and a must for anyone near Jordan. The ancient city is a fabulous collection of ancient architecture and beautiful canyons. Established as early as 600 BCE by early Nomadic Arabs migrating from the Arabian peninsula, the Nabataeans made the city a popular stop over point for traders carrying frankincense and myrrh to the Mediterranean. The early architects combined elements of Greek, Egyptian and Syrian culture and the city flourished for hundreds of years. In the first century, the Romans conquered the middle east and Petra became the Arabic Roman capital. Due in part to a series of major earth quakes that damage the cities aqueducts as well as the decline in paganism (Frankincense and Myrrh were no longer used in rituals), Petra declined and was eventually abandoned after being conquered by the Arabs in 663 CE. The abandoned city was unknown to the western world until a Swiss traveler described his visit in 1812, since the city has become a UNESCO heritage site attracting over 500,000 visitors every year. The “Treasury Temple” was featured in the film Indian Jones and the last Crusade.

Petra birds eye view, the city once had a population of over 20,000

I spent three days wandering from tomb to temple to residence. Each structure was carved completely out of the sandstone rock. It is fascinating to see how one of the earliest civilizations lived and thrived in the desert, building/carving massive facades to honor their gods and loved ones. Yesterday I stayed in the city well after dark and had the whole city to myself, an absolutely enchanting experience even though I was stumbling around in the dark. Petra is exceptional and I was able to look through the hundreds of tourists and constant hassle of locals and see the marvel within. 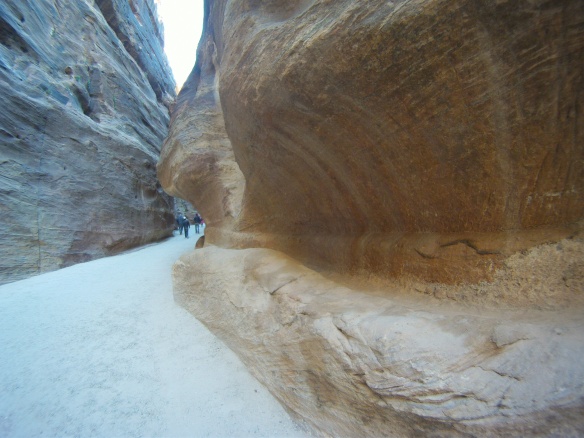 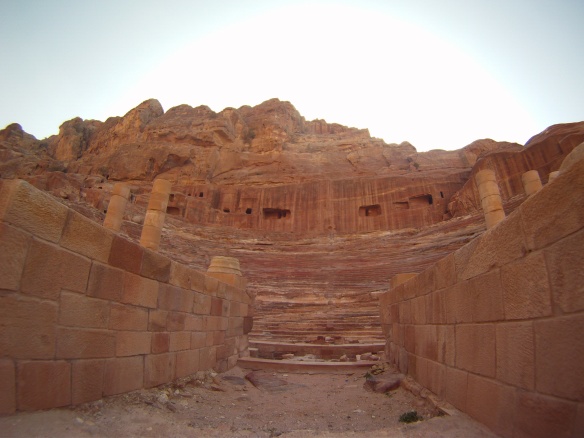 Remains of a Pagan temple

I am now headed to the Dead Sea and plan on being in Amman, the capital by next week. I should be in Israel by early March. Will write again as soon as I find internet.

9 thoughts on “Petra, Wadi Rum and deserts of southern Jordan”