I found the large crowds and constant click of cameras overwhelming in the city of Kyoto. I wandered from historic Buddhist temples to ancient Shinto shrines only to be engulfed by the mass of tourists desperate for a picture of Japans preserved culture. Kyoto is the only city that has 17 UNESCO world heritage sites and I found many of them to be more like a theme park than a cultural heritage. Many of the historic temples are painted in Gold or lacquered in Silver and I often found myself wondering how a Zen Buddhist monk would practice in a temple so ostentatiously decorated surrounded by tourists waiting with cameras posed. It didn’t really matter though because there were very few practicing monks within the Kyoto’s city limits. 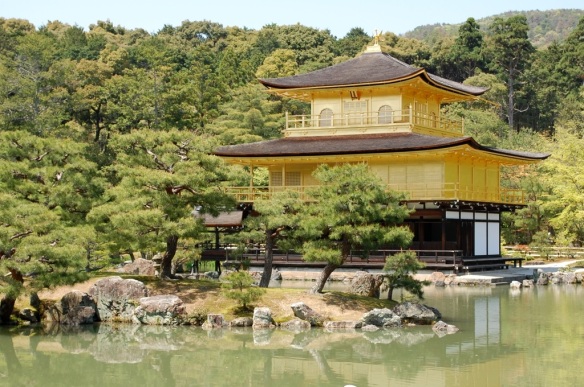 Fushimi Inari Taisha Jinja was probably my favorite site in the city. A traditional Japanese Shrine located at the base of a small mountain near the outskirts of the city. I arrived just before dark and walked the hour and a half loop to the top just as the sun set getting a great view of the city as the lights came on. I descended through the darkness and found the main shrine at the bottom fully illuminated in a bright orange glow. I paid my respects by bowing twice, capping twice then bowing again two times them head out into the night to look for a place to sleep. While unlocking Gaby I befriended a fellow cycle enthusiast who had just graduated from law school. He invited me to “Top Shelf” sushi, and we quickly ran up a tab close to $200 at a nearby sushi bar.

While in America I had never been much of a fan of Sashimi (raw fish), as I always found the texture to be rubbery and lacking in flavor. The price for a small order is also usually the same as 3 to 4 rolls so it is hard to justify. On my visit to the top shelf sushi bar I was told, actually pressured, to order anything so I had a whole meal of fresh blue fin tuna, salmon, shrimp and eel. Anyone who has not tried fresh Sashimi should give it a try the flavor is so much better raw than cooked. I can still remember the taste and texture of this meal! 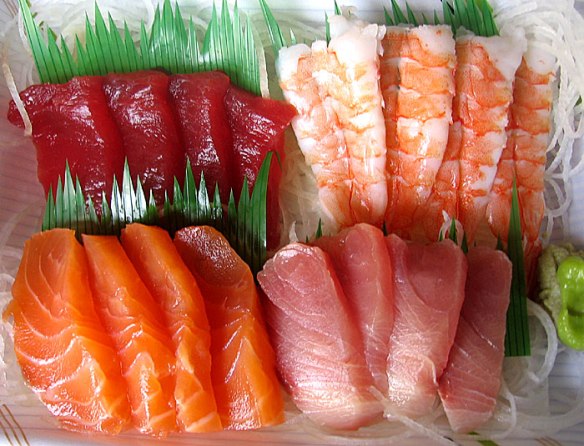 Crossing a bridge with Mt. Fuji in the background

The shortest route from Kyoto to Tokyo was through the busiest and most populated region of Japan. Even through the distance was only about 450 km it took me close to 6 days as my riding options were reduced mainly to the sidewalk. Outside of the countryside there is very little room for a cycle tourist in Japan. The streets are packed with vehicles going too fast and the sidewalks are often too narrow with traffic going too slow. If that is not enough of a barrier there are distraught school kids everywhere on bikes paying very little attention to where they are going, as well as bridges over many of the busy intersections transforming my daily ride into more of a cross fit training session. 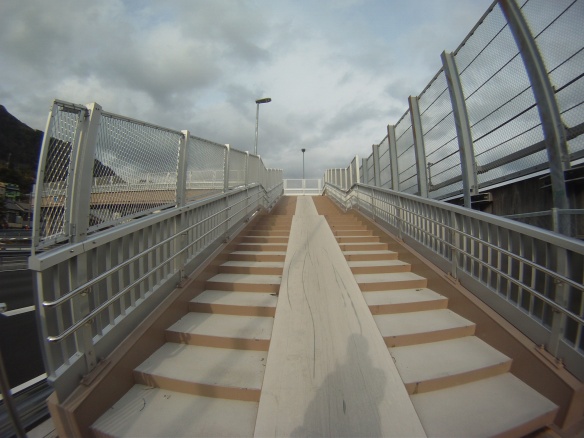 Sidewalks would often give way to this ramps that lead up and over bridges at busy intersections. Pushing a loaded bike up these gets tiring! 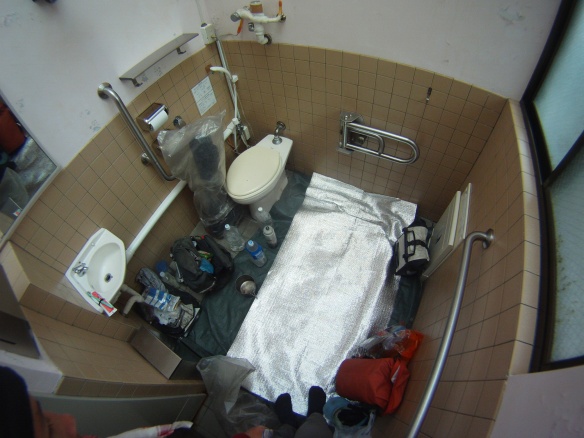 Handicap restroom hotel room on the summit of Hakone

One evening, after rush hour, I pushed myself to pedal another 16 km to the neighboring city of Hakone before setting up camp. It had been several days since I looked at the route online and little did I know that I was about to climb a 3,500 ft mountain in the dark! All of the sudden the city lights disappeared and I was pedaling on a sidewalk walk into the darkness. I tried to convince myself that I was only climbing a small hill but the road continued up and I painfully watched as the kilometers slowly went by. It had been raining all day and evening though I was sweating I could feel the temperature get colder and colder as I approached the summit. After an hour and a half, I reached the summit only to find everything in the city of Hakone closed except for a convenience store. My clothes were drenched in sweat and a street sign displayed the current temperature at -5 C. After eating two steamed meat buns I enquired the distance to the nearest town and was told that it would be another 20 km straight downhill. I was too tired and cold to attempt a descent soaking wet at -5 C so decided to look for a place to camp for the night. Much of the ground was icy, and after pedaling about shivering in the cold I came upon a public restroom that would give me shelter for the night. After a bit of investigation I found that there was a private handicapped section that had a locking door! Delighted I set up camp inside and fell asleep only to be awoken a few hours later by someone vomiting in the neighboring toilet. I didn’t sleep well but at least I didn’t freeze.

My host and friend in Kamakura, Hatashimari teaches me to make my favorite Japanese snack Oni Guri Rice balls

I just arrived in Tokyo after spending a few days in Kamakura. I will spend the next few days here before returning to the states for the holidays. This is my last post from Japan, east Asia was enjoyable but did not quite match my adventurous expectations after visiting the Central Asia. My dreams are filled with memories of the Middle East and I look forward to getting to more exotic lands soon! I am less than ten days away from my 31st birthday; a year ago I was on the Croatian island of Krk with Ljubinka and Nino! I hope to see you all while in America!

Trying to navigate the busy sidewalk and streets en-route to Tokyo, imagine trying to pedal through this chaos for 8 hours! 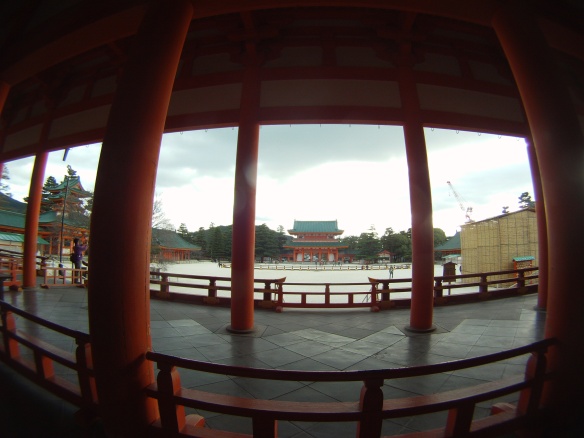 Courtyard in one of the many Shrines in Kyoto

3 thoughts on “Last days in Japan”