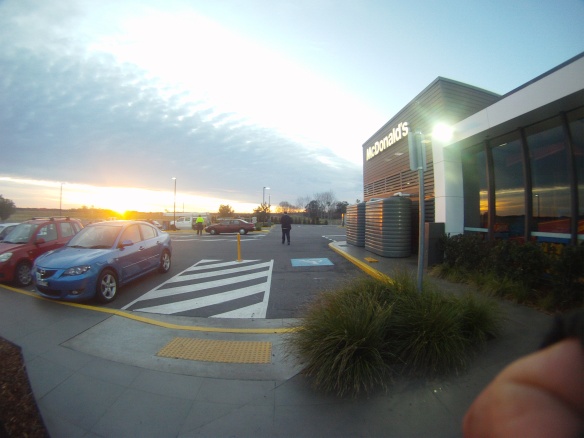 Maccas sunrise. A freezing cold morning but I have never been happier to be at McDonalds!

Just so you know; It’s Cans not Carns (Cairns), Foster not Forster, Melbin not Melbourne. Australian’s don’t like pronouncing “R”s and substitute a “uh” whenever they come up. Weekend hours also took me a while to get used to, and I sometimes wonder how anyone who works a 9-5 week can get anything done on their two days off. Saturdays in Australia are the equivalent of American Sundays, shops close at noon, “Mom and Pop” will be closed all day. Sundays however, are like national holidays where you will be lucky to find anything open. I remember on one mid Saturday morning walking into a supermarket, only to find myself being the customer before closing time. 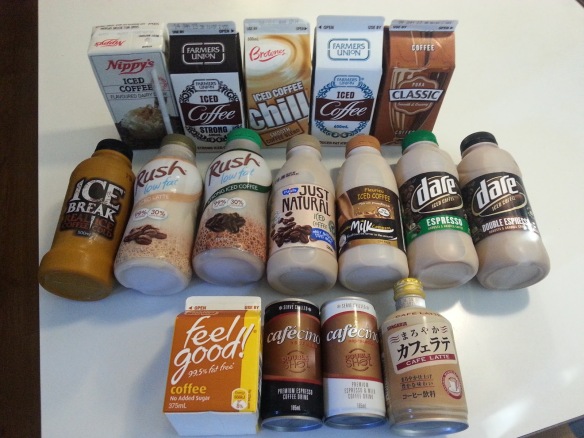 The never-ending variety of commercially available Aussie Iced Coffee’s. Most of them are too milky and sweet with little taste of coffee. A typical Aussie breakfast, savory pie and an ice coffee. Lunch another iced coffee.

Quintessential Aussie foods: Vegemite (A salty Brewers yeast spread), Ice Coffee (Sold in milk cartons and sometimes plastic bottles that look like energy drinks, sometimes stores will have entire refrigerators dedicated to this stuff), Pies (Don’t inquire about what type of fruit or if it can be served A la mode Australian pies are Savory and filled with cheese, cream, and meat bits) 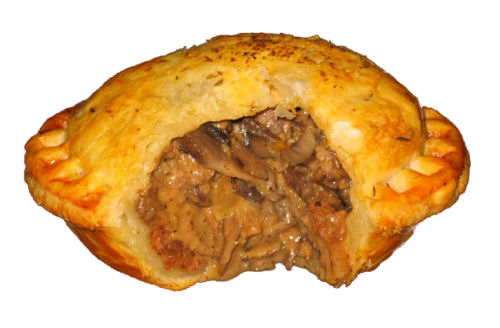 Savory Australian meat pies, these should still be served A la Mode

I will bring a large jar of this stuff back with me to the states. If it does not get confiscated at customs you are welcome to try some! It is supposed to be super good on pizza!! I can’t wait

I clinch my teeth as another huge Australian Road train passes me on a steep climb. I am on the busy national highway, heading south to the nation’s capital, and I have spent the last three days cycling in a recent cold snap. Throughout the night I am woken by strong winds battering the tent and numb fingers and toes. The temperature is really not that cold, minus 1 or 2 C at its coldest however the wind chill goes right through my clothes, straight to the bone.

Unlike the US, Australia lacks a central railway system, making the interconnected highways the major network for transport. Enter the Australian road train, the scariest thing I have encountered on the roads. If gazing into your rear view mirror, or looking ahead to pass, a road train would look exactly like a standard semi truck, but as it got closer to pass you would notice that it is at least twice as long. 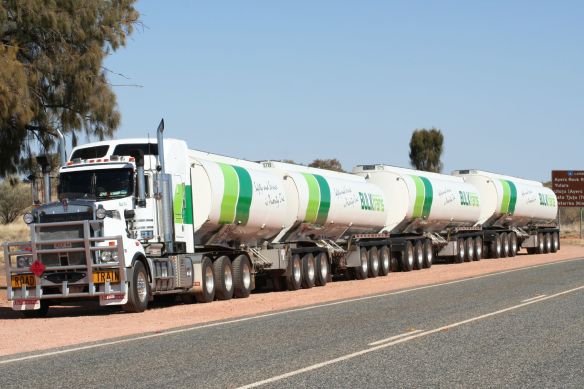 Road train pulling thousands of liters of petrol. Can you imagine what it feels like to be passed head on with this thing going over 100 km an hour? Hokusai’s Great Wave

Think of yourself pedaling along a nice, smooth asphalt shoulder, it’s a quiet main road, you can hear birds in the distance, the wind is in the trees and leaves dance on the speckled road as you pass. Then, you hear what sounds like a train. You look to the left and to the right but notice that there are no tracks nearby and then… “Whoa Si Mama” a huge road train passes you going over a 100 km/hr. The first thing that happens is that you are pulled into the passing monstrosity like the drowning passengers on the Titanic, some sort of vacuum like force, then as you start getting closer you are expelled with a huge tidal wave-like wind. 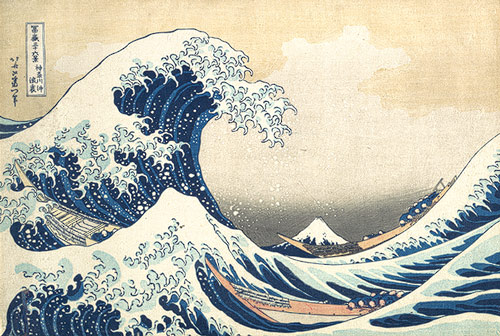 The Great Wave. I think of this painting every time I am passed by an Australian road train. Btw that’s Mt Fuji in the background.

Yesterday was officially my last day on the Australian road, and was by far one the most difficult! I pushed, and struggled all day turning the cranks into the cold wind only to find my afternoon plans changed after my ferry was canceled. I then pedal all over the city trying to find the main office, hopelessly waiting at the wharf for more canceled ferries. 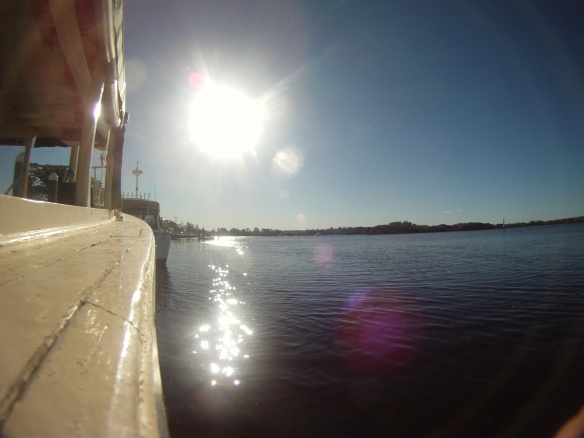 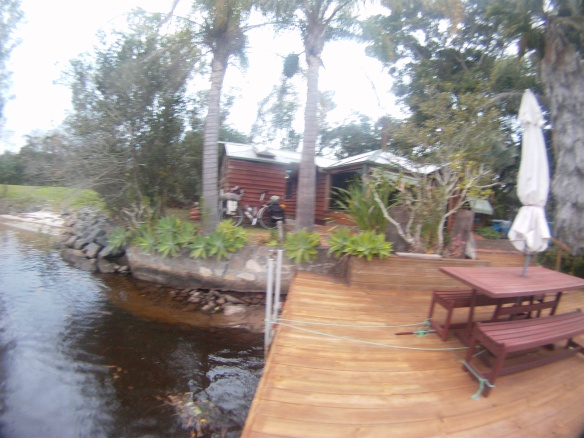 I rolled up to this house and asked if I could camp in the yard and was given a place to sleep in the pool house. For some reason the glass walls were less insulated than the fabric of my tent. It was freezing! 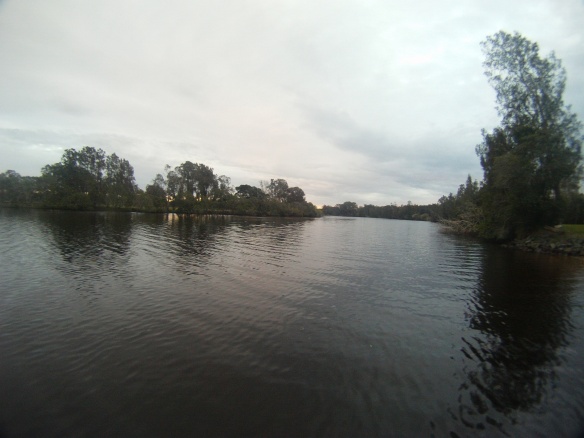 Australian’s are extremely opinionated people and when they are not drinking large cartons of Iced Coffee and or eating fatty, savory, meat pie they want to argue about everything. Most of the time these arguments spur from asking distances between towns and whether or not I can find drinking water in certain locations. One thing leads to the next and pretty soon I am being told how “I am not supposed to pedal in sandals and that I am not wearing the appropriate cycling hat”. Most of the time I can’t be bothered to argue other times I look to my feet and walk away. Australian’s are not racist per se but are to often very politically incorrect. I constantly hear locals spouting off about “Colored fellers, Japs and blacks” I have even been called an “Injun giver” once or twice after letting people look at my collection of maps, then asking for them back. In the supermarkets there are even huge sign’s advertising “Jap pumpkins” or “Jap food”, I also sometimes hear black beans referred to as “n*gger beans” 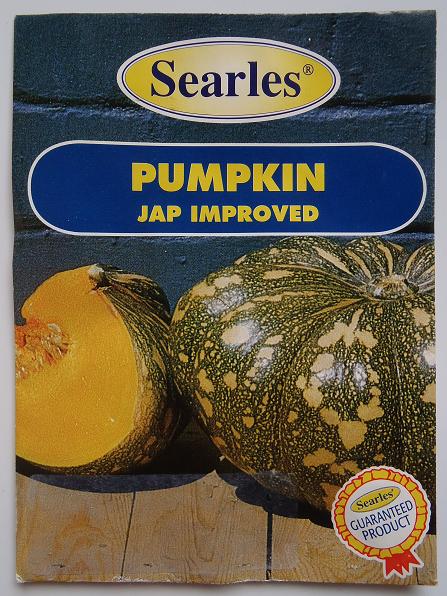 It was at least an hour after dark when I arrived in Nelson bay, the northern suburb of Newcastle. From the turbulence of the ferry I had watched the sun fall behind the clouds and a few bright stars appear in the darker regions of the sky. Since arriving in Australia I have been watching the two planets Jupiter and Venus slowly move closer toward each other in the night sky. The air in the Nelson Bay harbor felt colder than when I had departed and the wind seemed to have picked up a few knots. The captain of the ferry had given me the local during passage on where to camp outside of Nelson bay; Marsh Rd. Marsh road, was a remote dirt road about 16 km outside of town. The area was supposed to have several turn offs where one could easily set up a tent and be undisturbed till morning. I set off, cold, tired and hungry hoping to be sleeping under the stars in no less than an hour. After a few kilometers my headlight dimmed, batteries drained and eventually died, but I pedaled on thinking of a warm sleeping bag, hot meal and windproof shelter.

Marsh road turned out to be one of the muddiest, roads I had yet encountered in Australia and was literally a causeway over a large swamp. To the left and right I could see the reflection of the night sky, and began to wonder where I was going to pitch my tent for the night. For another 15 km the road never deviated from the soggy, cold marsh, and in some areas I could see ice crystals forming on the puddles. The cold and wind was beginning to break my spirits and I reflected on the potential long night ahead of me. Finally I saw bright lights ahead and as I get closer I saw big sign brightly illuminating the words “Jehovah’s Witness Church of God” into the dark cold wilderness. “Great” I think to myself I had high school friends who were JW’s, I know a few things about their religion, they will probably let me camp here, maybe they will even offer me some hot tea or coffee!
I entered a packed parking lot and looked through the windows to see a large church procession giving way. A late comer drove into the parking lot, wearing a suit and tie and I politely asked him if I could camp in the back yard of the church. His demeanor was so familiar in many ways, and quickly reminded me of my high school friends. He told me to wait and 5 minutes later the JW head honcho comes out and tells me that I can not camp on the church property and that I had “better find a place to sleep soon because it was cold”. Tell me something I don’t know I thought, I have been pedaling in this for close to two hours now.

I pedal back out onto Marsh road, and soon the road joined again with the main highway. The dark road was illuminated every 100 meters by a tall fluorescent street lamp and I was glad to be done with pedaling on a pitch dark road with a drained headlamp. My happiness quickly changed though as the wind returned and the large road once again left the safety of the street lamps. I pedal on looking for any place to put a tent, there are barbed wire fences on both sides of the road and dogs from nearby houses begin to bark as I pass. It is not long before my rear tire become flat and in the cold darkness I mess around with the pump trying to put a few pounds of air to get me to safety. An angry dog sees me helplessly pumping up my tire and jumps at me from behind a fence, the dog is tied to a collar but is viciously barking and snarling at me.

“Why did I pass on eating that dog meat with my father so many years ago in rural China” I think to myself?

I push my bike a few hundred meters and set up camp in the front of someone’s house. Too exhausted to cook, I set up the tent and pass out. All night the wind blows and I shiver in my sleeping bag till dawn.
5:30 am, there is just enough light to make out the shape of my tent in the yard, I shift in my sleep trying to keep warm and suddenly dogs start barking.They continue and seem to only get louder, soon it sounds as if there is a huge pack of them outside my tent. I don’t recall camping next to a dog kennel but there were definitely a few angry dogs outside my tent. I unzip and lookout in time to see a man shining a flashlight in my face.

“What the fuck are you doing here”

“This is private land, get the fuck out of here”.

“I apologize, I am leaving” I say still half asleep. It is freezing but at least the sun will be up soon! I pack up to the sound of angry dogs barking their heads off. My rear tire is flat but I put a few pounds of pressure so I can depart my recently turned hostile camping environment. I sign, breathe in the cold morning air and pedal on.
A few km down the road there is a warm McDonald’s. I buy a $4 coffee and write this post.
I only have another 25 km to my hosts place in Newcastle, the wind continues to blow but the sun is out. Will be in Sydney by Friday! Home in Murrieta, California by Tuesday! See you all very soon!!