My mind wanders, back to the Mekong river and its source. I look across at the distant bank and see Thailand. The slow moving water has been to China, Myanmar and even parts of Tibet. And now, standing at it’s side I prepare to travel back to the country that almost took the lives of my brother and sisters.

There are people here that spend their entire lives on the river, coming to land only to sell and trade. Their babies too young to swim are tied to the boat,  keeping them from falling in. The river is wide, and bamboo shacks built on piers can be found not far from the shore. In the late afternoon the river people can be seen pulling fish from nets and putting tarps over their boats. 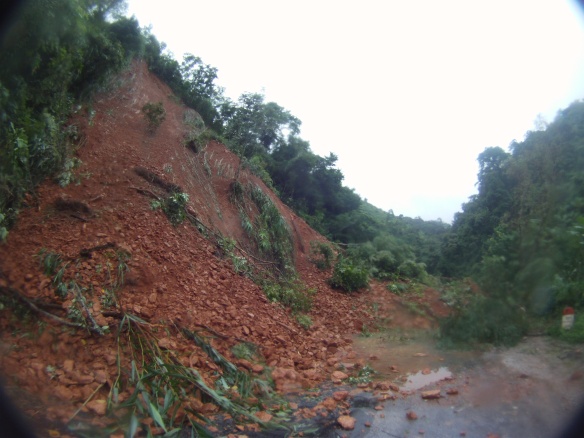 Huge landslide en-route to Vientiane, even motor cycles couldn’t get through.

Pushing a bike in the mud has its consequences

I have been in Vientiane for three days, and am patiently waiting for my Indian visa. The jungle road to the city was extremely mountainous and on most days it never stopped raining. Many times I would have to stop pedaling and push through a muddy section of road, or carry Esperanza through a shallow river. In one area the entire mountain gave way and covered the road. Traffic was backed up for kilometers as no car or motorbike was able to pass. With a little effort I pushed through to the other side and watched the hundreds of people sitting in their vehicles waiting in the rain. 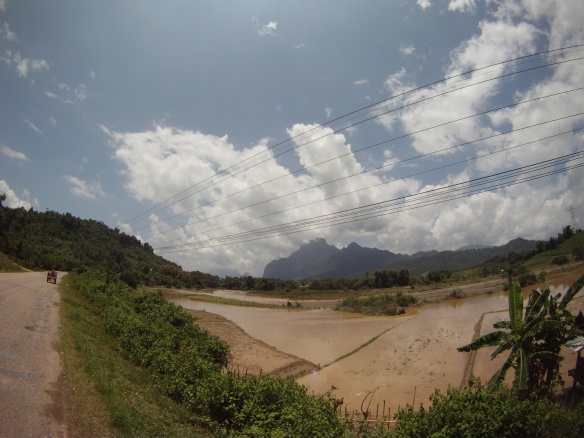 Considering its status as the capital of Laos, Vientiane, as far as Asian cities goes, is rather quite. Rush hour brings loud, polluting motorbikes, and three wheeled “took tooks” driving on the sidewalks and into oncoming traffic. Wheeled carts selling fruit, meat and smoothies fill the sides of the roads and Buddhist monks wearing bright orange robes navigate their way across busy streets and intersections. Its complete chaos. Adding to traffic is a large percentage of overly cautious drivers performing 6 point turns in large intersections, parking lots and narrow drive ways. Sometimes drivers will stop in the middle of a narrow road and hold up traffic while they exit their car, make sure there is enough space. I brought up the subject with a few locals and was told that only 20% of the drivers in Laos have licenses. 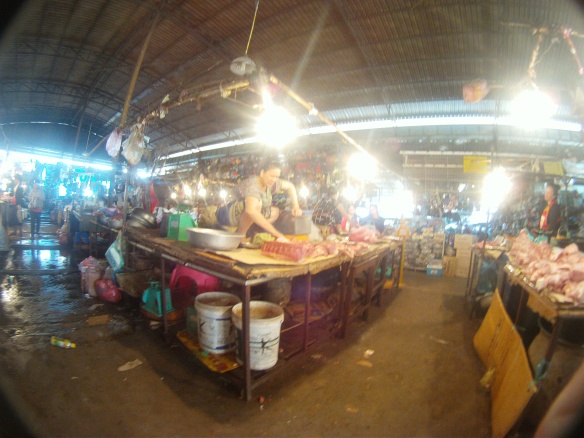 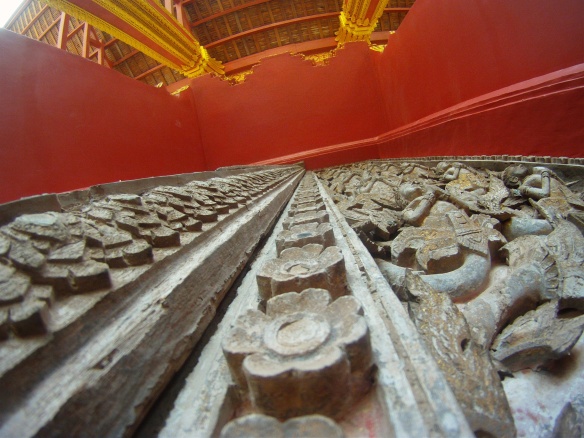 My visa has be granted and by the time most of you read this I will be well on my way, via a 36 hour lay-over in Kuala Lumpur to New Delhi. As mentioned above, I am a bit reserved about India from my previous experience. In 1992 my family did a pilgrimage of the Buddhist holy sites in the north east of the country. We visited Varanasi, swam in the Ganges and traveled to Buddha’s enlightenment and birth place. Towards the end of the trip however my brother became seriously ill. Fever, diarrhea and nausea were so normal to all of us that we thought it would pass.  Weeks later, while en-route for America in Hong Kong, my mother took him to the hospital where he was diagnosed with Typhoid Fever. My two sisters soon followed. My older started felling really cold, even while taking a hot bath, and was soon lying beside my brother also having Typhoid, My little sister 2 years old at the time soon was diagnosed with Tuberculosis.

The Hong Kong infectious disease ward is not a pretty place, and my mother spent every day keeping them company, and at night sleeping on a wooden bench outside their door. I escaped the physical sickness but mentally became ill. For years afterwards I was completely paranoid of germs, illness and disease, I would sometimes wash my hands so many times that they would bleed. At 8 years old life seemed completely out of control. And it would take me several years to feel comfortable again with life.

This picture was taken on 1992 pilgrimage to India.

These thoughts now echo in my mind as a prepare for the journey. I am stronger physically but mentally I worry about the fears returning. I will stay north and head to the holy Sikh region of Punjab before cycling the Himalayas to Nepal. Touch base again soon, I will reunite with my brother in Bhutan!

I remember taking the over night boat from Hong Kong to Guangzhou, my family of 6 all sharing a small cabin with two 2 beds.
I remember being squeezed into the back of an Indian station wagon on pilgrimage in northern India, the 6 of us crammed in the back seat .

One of the many Old Buddhist monasteries in Luang Prabang.

Many bordering countries are so similar that if it weren’t for the border you would never know that you were in a different country. Most of Europe is like this, however I remember Albania being a third world country in the middle of modern Europe. Once out of China, I found Laos to be quite different. Development ceased, roads became narrow; full of mud and pot holes and residences became jungle huts; devoid of electricity, built of bamboo and straw. Chinese villages are full of electronic shops selling cellphones and boutiques selling knockoff Levis, now I find the villages full of naked children playing in roadside runoff, and elders carrying dirt and sticks on water buffalo carts.

Crossing an old bridge built for bikes and motorbikes. Skinny tires would easily get stuck in the seams of the boards.

The once cornucopia-like selection of vegetables and fruits, so prevalent in China, has also tapered down to a few wilted cucumbers, some yellowing egg plant and maybe a few bananas. The villagers here spend little time growing anything but rice, and supply the rest of their diet by hunting and scavenging in the jungle.

Meals usually consist of the plentiful and tasty glutinous sticky rice, (the rice is squeezed into a ball with your hand then dipped into the other dishes) and “jungle stuff”. The other day I was invited to an afternoon meal and the “jungle stuff” was the following: roasted rat, boiled river snails, BBQ toad, and wild mushrooms. (Roadside vendors often sell roasted bat, squirrel and bags of live insects for frying).

The road brings me up and down steep mountains, occasionally passing steps of rice paddies. The jungle comes right up to the road and is so full of life. Each night I camp and I find my stuff completely engulfed by insects, ants, and rats. Midnight usually brings a storm and by morning there is nothing left untouched. My clothes, panniers and pretty much everything I own, never seems to dry and is spotted with black mold. Even the inside of my hat and handle bars are spotted. The heat too takes its toll making my skin red and itchy, and turning the few vegetables and fruit that I do find into mush.

My guess is that this is the topography of the entire country.

The roads are empty during the hottest hours of the day, locals lounging in the shade or bathing in the rivers.  I pedal on trying to cover ground and my sweaty clothes begin to feel like a wet suit. The cash in my pockets can be “wrung-out” with sweat and my skin dries with a layer of salt. As tough as it is I feel privileged to be able to cycle every day with enough food and water and even a tent for camping in the jungle. I have found that a bottle of mineral water ($0.75) costs more than most villagers make in a day, and each day I drink 4-5 bottles. I see children with bellies swollen from starvation, and kids going through garbage looking for food to eat. Suffering is completely out in the open here.

Local shrine for the dead.

The Mekong River begins at the boarder of China,Myanmar and Laos. The river sweeps south, designating the border with Myanmar, then Thailand before finally cutting through the country.  In the shape of a snake, it makes its way north east for a while before heading south again. It is in this snake-like loop where the river meets a tributary creating a small peninsula which became a historic city called Luang Prabang.

Luang Prabang has an almost island feel with palm trees and a cool river breeze.  Historic colonial buildings, crispy French baguettes , and brick paved alleyways can be found between ancient Buddhist monasteries. Each day at dawn the Buddhist monks living walk the main street barefoot seeking alms. The city is quiet, peaceful and has been a good resting place the last few days. Yesterday I bonded with a couple from Chile, meditating in the monastery and practicing yoga in the park.

It is a good day! I am on the move headed south. I move quick as I might have to spend several days in the Lao capital waiting for a multiple entry Indian visa. I head to Cambodia then Punjab in September.

A boat built of plywood and bamboo reeds takes me down river to the Laos border. I have slowly observed the culture in southern China become more and more exotic with Buddhist architecture and jungle created cuisine of sticky rice and fermented foods wrapped in banana leafs. It is unbearably hot, and the long days on the bike leave me completely exhausted.

Heading south, in the distance Laos.

Each night in a stagnant tent I await a small breeze to cool my sweating body. Morning brings the sound of  monkeys, birds and the ever-present cicadas in the canopy above.

Laos will be a mountainous, jungle with Buddhist culture at its core surrounded by communist rule. A lot like China but with a deep rooted history in the ancient Theravada Buddhist practice. (China is predominantly Mahayana Buddhist). I look forward to offering alms to monastics and carefully finding a place to sleeping under large banyan trees.(The country still has thousands lands of active land mines left from the Vietnam war).