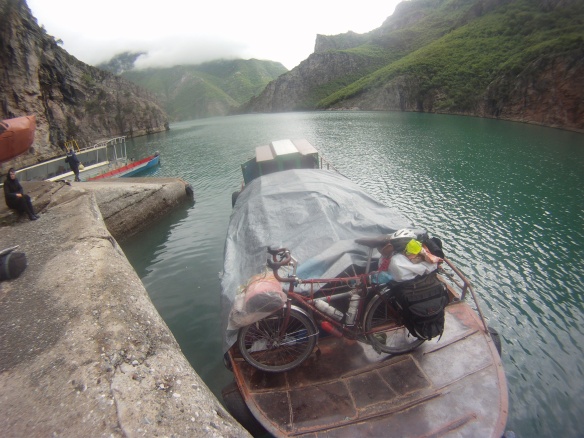 Koman lake ferry, through the fjords of Albania

I have crossed illegally into Kosovo. My planned route of pedaling into Kosovo through the Alps failed when Albanian border officials denied me access, saying that the border was only for locals. After pedaling over 100 miles through some of the roughest and steepest roads since Alaska I was not about to let two border guards stop me from completing my route. Turning around I pedaled towards a large minaret visible from the mountaintop border and arrived at the small village of Novoseje, (pop. 5,000). I rode into the center (the mosque) and was quickly surrounded by many of the Albanian villagers. I tiptoed around cow, lamb and goat dung and entered the local café. A few minutes later after speaking phrases from the following; Spanish, Croatian, Albanian and Arabic, I found two guides who would show me a local shepherd trail into Kosovo. 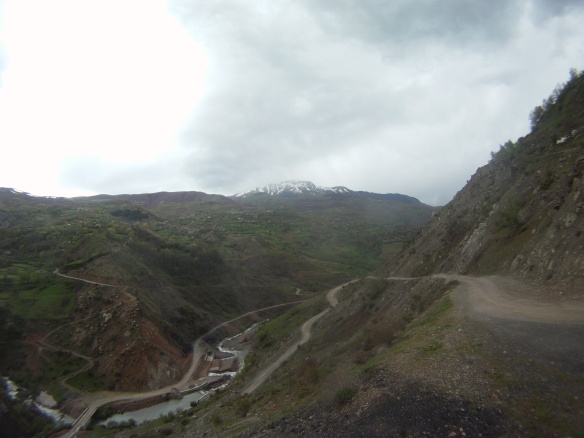 The back roads into Kosovo a ridiculous amount of climbing! 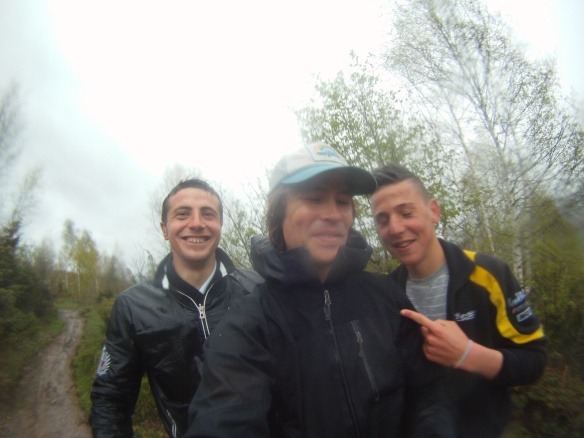 My Albanian Guides, just before crossing the barb wire fence into Kosovo

The trail was steep, muddy and half flooded. It had been raining for several days and many parts of the trail were now underwater. Riding was impossible, and I pushed Gaby through ankle deep mud and hiked in a downpour through a small village and several cemeteries. I am freezing, and for once glad at the warmth provided by pushing Gaby up hill. My guides converse with a few shepherds along the way and we reach a barb-wire fence. “This Albania, that Kosovo” one guide shouts between puffs of a cigarette. “We help you, then we go”, “Us no Kosovo, you OK”.  I toss over my gear, and with help climb the fence. Gaby, naked and free of all gear is then passed over the top. “Fat I Mire” (Good luck) I said good bye and was now on my own, in the middle of the Alps somewhere in Kosovo.

The trail into Kosovo was more like backpacking than cycle touring

From where I was standing I could see a trail about 50 meters away. Earlier on in the café I remember being told that “after crossing the fence follow the trail to the village of Krusevo”. The rain had turned into a light snow, and it was beginning to get dark. I followed along hoping to see a sign of life but after 30 minutes cold and wet I found a flat spot and set up for the night. Not long after climbing into the tent I heard the Adhan, the Muslim call to prayer, echo through out the mountains. I was now in Kosovo.

I am currently at an altitude of over 5,000 feet and the weather is constantly shifting between snow and rain. Today I had the intention of crossing the bordering into Northern Macedonia but had to turn back due to a snow storm, lack of strength and food. I have no Euros!! The Albania Lek is now worthless and none of the villages have ATM machines or will exchange dollars for Euros. I walked around for a few hours today trying to exchange money, no luck but many locals bought me tea and food! My best bet now is to pedal into Macedonia, word has it though that the border, like before is for locals only. I am not trying another illegal crossing in these snowy conditions, especially since political relations between Macedonia and Kosovo are hot, several Macedonians were recently arrested illegally crossing the southern border. 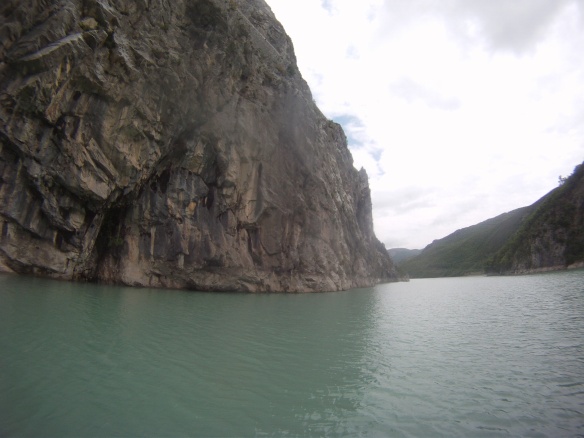 The ferry from Koman to Fierza was a real culture shock. I had heard that the 3 hour boat trip was popular among tourists but when I pedaled to the ferry terminal I was the only westerner around. I was expecting a large boat with a café and space for people to park their cars, you know classic spoiled westerner stuff, but it was nothing of the sort. The boat was a medium sized, Louisiana swamp vessel, with a trash trap used to protect passengers from the rain. Other than a handful of locals the cargo consisted of goats, vegetable buds (onions, and other root vegetables) and lots of groceries. I learned this a little later, but most of the passengers live in the remote mountains between Koman and Fierza, and Koman is where they stocked up on supplies. I tied Gaby to the helm and the boat sped off into the Albanian Fjords. Not wanting to share my seat with nibbling feisty goats, I sat at the front of the boat, and watched as we passed boat after boat filled with goats and sheep, entering deep into the mountains.

One armed captain guided the boat and never spoke

The water reflected the jagged mountains, and trees seemed to grow even on the rocky cliffs . The landscaped seemed almost uninhabitable, no roads, power and little dirt for farming, but on the 3 hour journey we passed several rock houses perched on the top of steep mountains. Sometimes the mountain people would call out to the boat and the captain would stomp his foot. The boat would dock and we would watch as they future passengers would climb down steep rocky trails to the river.  Waterfalls seemed to be around every corner and the current along with the motor slowly carried us to the village of Fierza.

In Fierza I learned that “Shite” means for sale, and “buke” is bread, in almost every village you can find a sign that says “Shite Buke”. From Fierza I pedaled north through the Alps meandering my way to the city of Kukes. The Alps here are a bit lower than those in Theti and the landscape is rich with farmers, sheep, cows and goats. One morning I decided to wash in a small pond near my camping site, the water was a bit cold but it had been several days since my last bath. I was about knee deep when I noticed these “cute” worm like creatures  swimming up to me, “Hmm your cute what type of creature are you”….”Oh god, fuck, its a leach”!! One of the leaches grabbed onto my leg and I ran out of the water, luckily it hadn’t gotten too good of a hold and I was able to pull it off with my hands. Later I put a stick in the water and made a few splashes soon afterwards a few leaches came to the shore and even crawled onto the sandy banks!

Camping near the leach infested pond

In Kukes I met some Albania godfathers (Think Goodfellas in Albania). I ordered what ever I wanted and they told me that it was all on the house. I drank close to a gallon of beer then smoked a hash joint that was pretty much consisted of a finger rolled in cigarette paper!. The Albanian custom is to “cheers” (Zoo Mir) every time you take a drink, this pretty much insures that everyone drinks at the same speed, and that everyone gets wasted. Afterwards my new friends invited me to their village where they wanted to butcher a sheep in my honor. Before leaving we went to the local internet café where I helped one of my friends talk dirt to his half Greek half Russian mistress in English on facebook. After about 20 minutes of facebook laughter I passed out and awoke in a hotel in the city.

Albanian Godfathers,
these guys out partied me

Hoping the boarder cross to Macedonia is a success, if not will have to pedal north back to Albania! I will touch base again soon!