A small country broken into districts by large mountains. Most district capitals are located in long beautiful valleys. 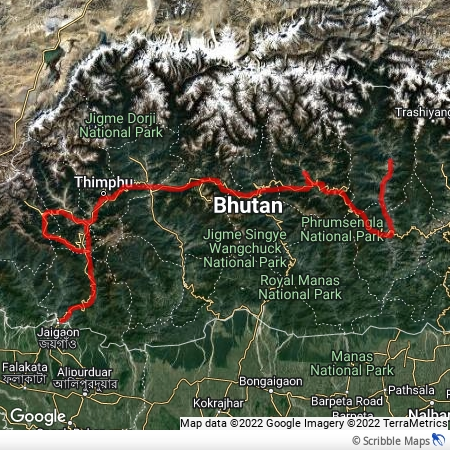 I spent just over two weeks exploring Bhutan. And in retrospect I have very conflicting views of the remote country. My first two weeks in Bhutan were spent cycling with a young local named Kunzeng, who following me in a small station wagon as I headed east from Indian/Bhutanese border city of Phuentsholing. He invited me to his home village where I had lunch and breakfast with his grandmother and I spent two days with his high school friends in the Jakar valley. I couldn’t have asked for a better experience of what Bhutan was really like. Staying with locals and camping around fires the Bhutanese seemed to learn more about me than I did from them. Because of the extremely expensive visa , $250 a day, the typical tourists that Bhutanese see are old, retired, rich couples who spend much of their time in the resorts. This was a new experience to my Bhutanese friends, and I was constantly told that they had never met someone like me. 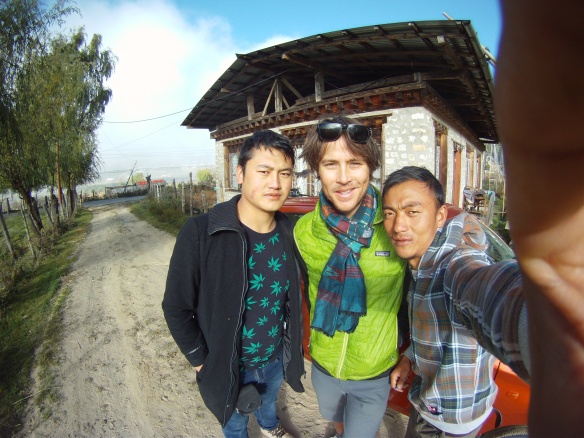 Kuenzang and Jigme my friends in Jakar, Bumthang valley.

When I was not staying with locals I slept in small roadside guest houses filled with Bhutanese truck drivers. I was introduced to the local vice early on and spent many evenings drinking rice wine cooked with scrambled eggs and smoking the local hand rolled hash.From dawn till dusk I was alone on the roads and could explore at my whim.  The mountains, rivers, and valleys are stunning and in many ways I couldn’t have found a better cycling destination. However, I was completely dismayed by the treatment of Indians who make up the majority of Bhutan’s work force. Bhutan’s roads are built and maintained by an all Indian work force, and they live in communities of shacks built out of old oil barrels next to the road side. Their tools are extremely primitive, Indian women and children pound rocks all day with hammers to make gravel, and men make road side fires to bring large barrels of tar to melting point. 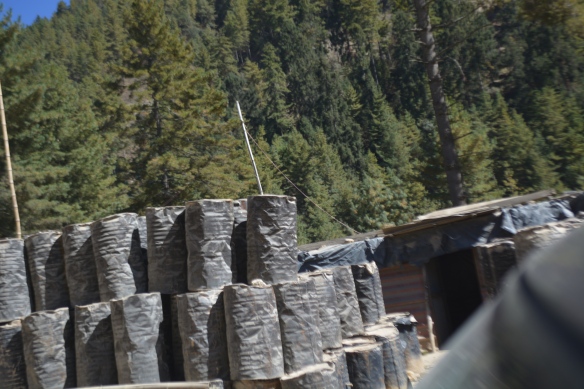 Here is a stake of oil barrels near a roadside Indian village, After empty the Indian labors will flatten these barrels out to make paneling for their homes.

In the many rice farms I encountered Bhutanese no longer use yaks to till the soil, and instead use petrol fueled power tillers. Saying that the old method was causing “too much suffering to the animal”. Meanwhile the Indians are breaking rocks with the bare hands to make the roads smoother! The Bhutan/India borders are wide open with Bhutanese going out to buy cheaper Indian products and Indians coming in large numbers hoping to find work. 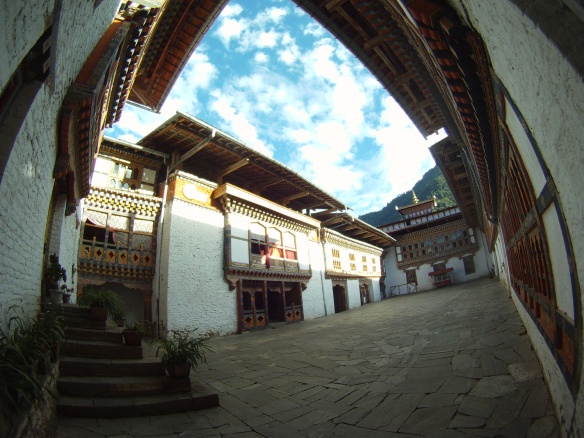 Lhuntse Dzong. A Dzong is an administrative building half monastery, half district office. Each district has its own Dzong in a similar design. Buildings around a square courtyard. 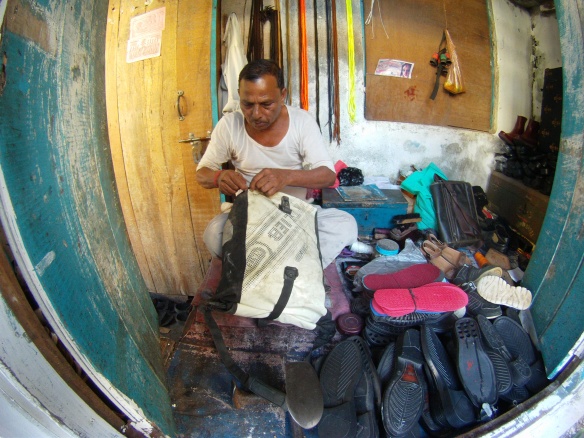 This is the most common site in Bhutan, Indians fill all the labor positions, and live in small shacks  near the highways. My Ortlieb panniers completely came apart and was sewn together by this cobbler on the streets of Phuentsholing in west Bhutan. 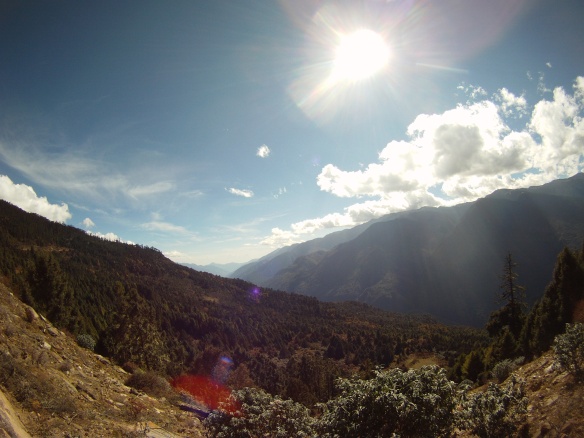 More of the beautiful eastern Bhutan. Anyone making the trip should put the east on the top of their list.

I was lucky to obtain an official guest invitation to Bhutan so was able to skip the formalities associated with a typical tourist visa. However my brother was not so when I arrived in Paro two weeks later we got to experience what it is like to be a tourist in Bhutan. Being a tourist in Bhutan means that you have to stay in a government regulated hotel, eat a designated restaurants and visit places deemed tourist worthy. You are also give a guide which will be with you all the time. After two weeks of Bhutanese freedom having to have a guide and to follow regulations made Bhutan seem more like a museum exhibit than a real country. We went to all the tourist places, ate buffet meals in hotels, and spent too much time being followed by our guide. However being with my brother made things OK because we could at least share our views of the tourist imposed version of Bhutan. 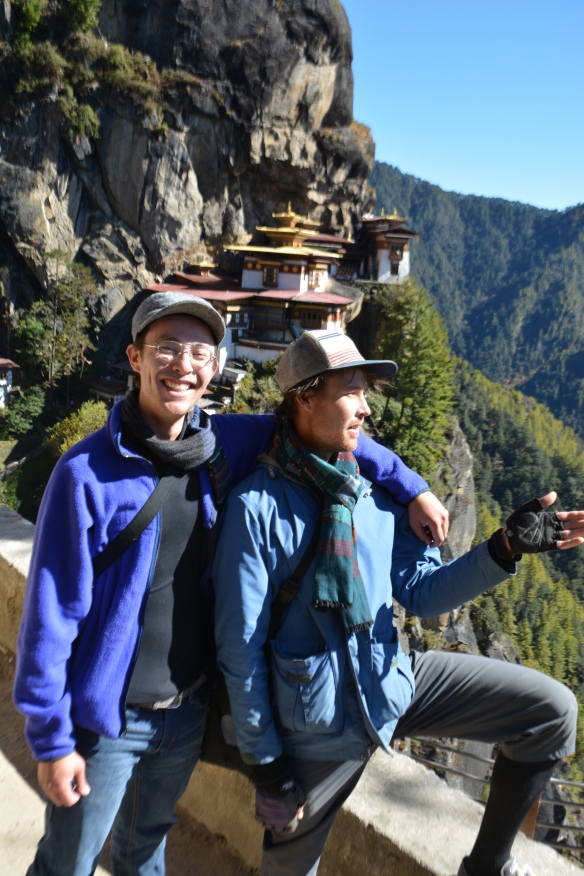 Standing below the famous Tiger Nest Monastery outside of Paro city. Many tourists only walk as far as their cameras are allowed and never venture inside the monastery. 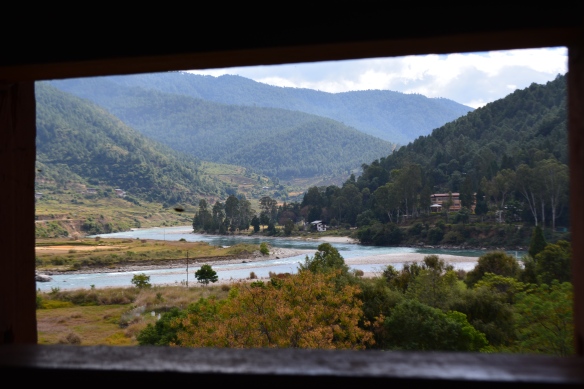 Bhutanese visiting the Dzong must wear their official attire called a “Go”. Tour guides will usually wear their GO as do the older generation and other members of the government. The majority of people in the cities however wear western clothes. 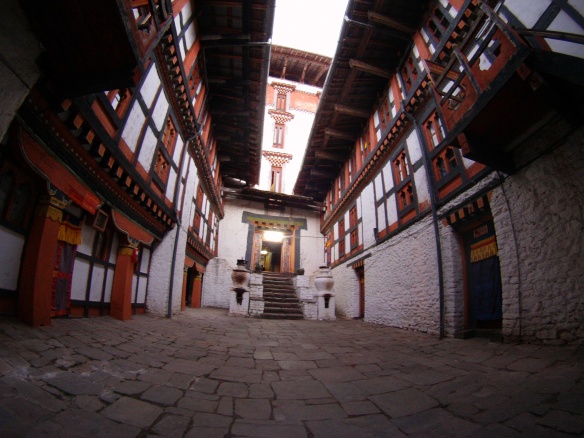 Typical courtyard inside a Dzong.

My brother and I tried in vain to visit something not on the tourist map, we even came up with an idea of going to a textile school. However this too was filled with tourists taking photos of Bhutanese children making sculptures of Buddhist deities while playing video games on their cellphones. I feel that as a tourist Bhutan will show you how it wants to be seen by the rest of the world, as a small country with a strong culture that continues to teach the old ways. However this is only sustainable with; an extremely small population (about 700,000 Bhutanese), a large exploited Indian workforce, and extremely expensive tourist visa (the revenue generated from tourism is second only to Hydroelectricity).  For example a typical Bhutanese meal consists of several types of dried meat, all coming from India. Slaughter houses are banned in Bhutan so all meat products which make up the majority of Bhutanese meals are shipped into the country from India. Butcher shops are all run by Indians and all the meat products contain large amounts of chemicals. Alcohol however is sold throughout the country and many Bhutanese start drinking at noon.

This was probably the best thing that my brother and I got to see/do in Bhutan. Totally off of the tourist path we met some locals who invited into their puffed rice factory.

Brothers look to the Himalayas for respite from a facade.

To me the real Bhutan and Bhutanese culture is in the east where few farmers still use yaks to plow their fields and old women kit clothes on wooden looms near the roadsides. These people make only a few dollars a day and subsist on trading rice and vegetables for other necessary goods. I am now heading to explore the eastern states of India Nagaland, Arunachal Pradesh, Manipur and Mizoram. I wish you all a happy Thanksgiving and will be home for Christmas.