Hello and good-bye to Australia’s most popular vacation destination “The Gold Coast” Praised by the rich and ridiculed by the poor. I found the city chaotic with closed roads and sidewalks filled with spectators as I pedaled in just in time for the annual 26 mile marathon.

Getting out of Brisbane was an absolute nightmare! According to google maps there was a “easy and simple” bike path that would lead me out of the city; however one path intersected with another, and before long, with very few road signs I found it almost impossible to figure out which path to ride on. Don’t get me wrong bike paths are great for commuting and daily cyclists but a first time user will almost always be confused as too often routes split into different directions many times requiring one to carry their bike up a few flights of stairs. 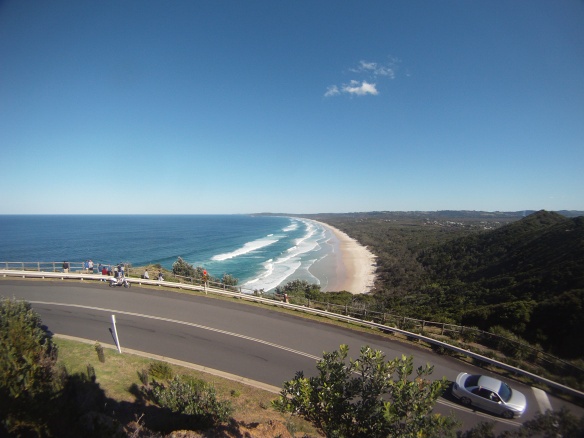 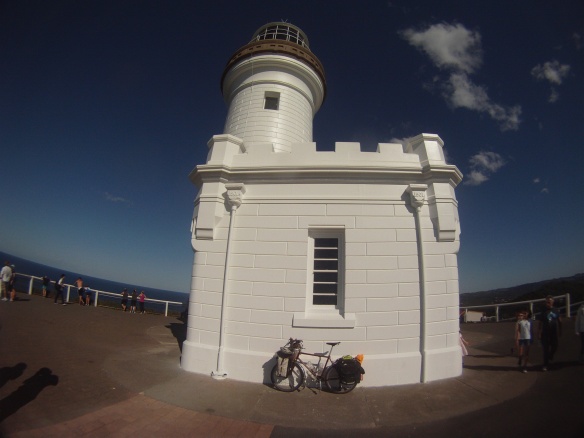 Gaby shines and climbs like a Billy Goat. Outside the historic monument, Byron Bay, NSW.

I was lucky though and escaped Brisbane before dark. Looking back it took me close to 3 hours to pedal distance of 4 km! Finally with the city behind me I pedaled into the darkness and found an industrial suburb to camp in. The next day I returned to the Pacific coast and arrived in the Gold Coast just in time for the beginning of a national marathon. Nigerians, Chinese, Scandinavia’s and other athletes from all over the world meet in Australia’s vacation paradise, The Gold Coast, for the annual 26 mile marathon. I found the city quite nice with al fresco cafe’s and lots of surf shops. Just south of the city I found the beaches of Kings cliff and Pottsville to be relatively unpopulated, making a great campsite and morning sunrise.

The local’s have slowly become more and more “new age” as I venture further and further south. Yesterday while exploring the cities of Brunswick heads and Byron bay, I was surprised to find myself sharing a picnic table with a group of yogi’s sporting long Sikh like hair, prayer beads and loose bamboo clothing. I asked them to show me some yoga moves but they scoffed and ignored my requests. Many of the women over here are wearing Indian Sari’s and men, other than the yogi’s sporting Middle Eastern “shalvar” pants. Lots of people with money and a lot of time on their hands. As chic as this place is the people are still relatively blasé in their opinions on life, and I remember that fashion only goes skin deep. 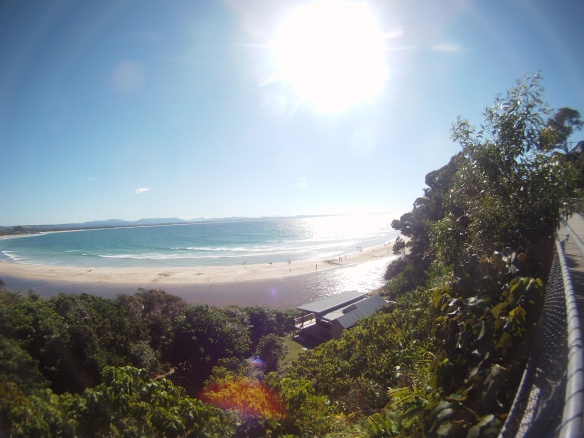 The coastal roads are so busy!! As the day gets closer for me to return to the states I notice that how dangerous it is to be pedaling this area. I have decided to head inland and hope that I can escape the large trucks and endless numbers of caravans. I am now back to the Australia I know; small towns with populations under 10,000 and sleeping in the bush. Nights are getting cold though and are only a few degrees above freezing. Should be in Sydney by next week! 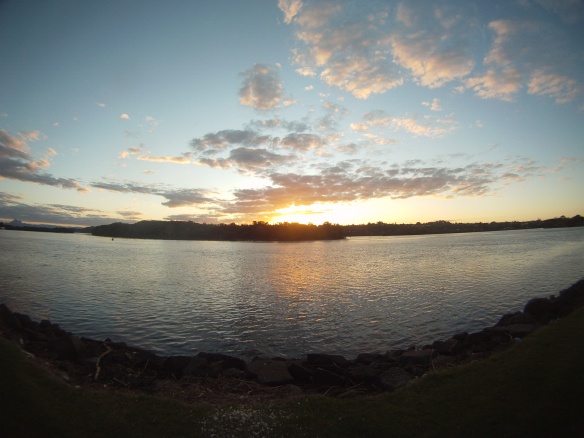 I have arrived safely Brisbane and begin pedaling south towards Sydney tomorrow. It was extremely difficult getting Gaby and all my gear to Brisbane on Tiger Airways, but after a bit a sweet talking and slight of hand I was able to get my over weight and oversize bags checked without excessive fees. My mind is cluttered with thoughts of returning home and continuing my travels, in some ways it feels like I have already left. Tomorrow will require much focus as I pedal out of the urban sprawl and on to the Gold Coast.