You must pay a fine! You have no respect for park rules! You think that just because there is a road that cars and buses travel on means that you can ride a bike here…. Look, there is a sign, look read the sign! Either you pay or we will call the police  (First encounter with Croatian Forest Rangers, Plitvica National Park)

Moss covered trees climbing out to the water

After a fantastic day of hiking around waterfalls and lakes, and thoroughly enjoying Croatia’s most popular national park, I returned to my campsite to find two angry Croatian Forest Rangers. These guys were big, buff, had shaved heads and were pissed off. I had broken 3 parks rules; camping (not allowed in Croatian National Parks), cycling (Not on forest paved roads) and forgetting to pay the day fee (I admit that I am guilty of this). I tried to reason with them, thinking that they were just trying to get a bit of cash off me, but I quickly learned that they were serious when they pulled out the carbon copy ticket book. All the red meat and rakija in their blood would not let me go without paying a fine, and I got off to a bad start by not giving them my passport, rather having them use my expired California drivers license as identification (Better safe than sorry, they could have been cons). First they wanted to charge me 800 kunas, then we reasoned to 600, finally I got them down to 400, but tried to get away with 200. Bad idea!! Authority is power, and when your job sucks (being a Ranger in the winter season), you enforce. OK!! 400 kunas, close to 80 US dollars for camping and cycling in a National Park!! WTF!! The worst part…… I had to pack up all my gear and head out of the park  after dark and was warned that if I tried to camp again within park boundaries I would be fined again. With this sort of treatment you would think that I was starting campfires or trying to mug a bear, all this for peacefully camping in nature. Sometimes it is obvious that there is nothing you can do, the more you fight the more you sink and this was the case. Well…. what to do, I tried to make the best out of it. I pedaled out of the park in the dark, and felt a bit hopeless, but found a nice guest house about 10 km down the road. I am now staying with a Asian Chief who specializes in hand pulled noodles, I guess things could be worse.

All seven lakes lead to a waterfall

(Earlier this week) Leaving Pula, I pedaled through the darkness to an open field, and slept under a clouded sky. Unaware at the time, I slept near a rooster coop, and awoke quickly to a premature cuckadoodledoing every hour between 2 to 6 am. I packed up at first light, and spent a long day cycling in the rain. Damn, in my time off I have become accustomed to leaving in doors and having a roof over my head during a storm. With nothing to turn too, I found sanctuary in the hood my rain jacket, that was until the wind picked up. I pedaled through Rijeka and had a very close call in a tunnel at the south end of the city. Riding on the sidewalk in the tunnel I slipped, skid and totally biffed it, grabbing onto whatever I could I ran into the wall to keep from falling into the busy street! Cars honked, and the sound of brakes echoed in the tube. I pushed my bike from there on and coughed-in the putrid air.

International Diplomacy:
A Nigerian, Palestinian, and an American all under one roof having a great time 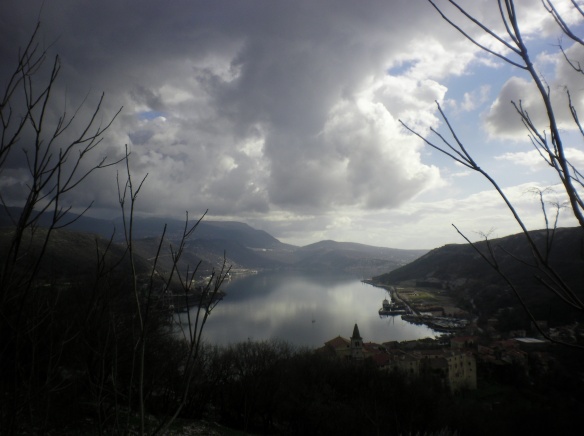 Village outside of Rijeka between storms

Just outside of Rijeka I found an empty park near a Pizza parlor, and set up my tent in a non-stop downpour. Everything was soaked, and I slept naked in my damp sleeping bag. I could smell the crusty bread and garlic coming my way from the restaurant and for a few hours I could hear the waiter calling to the chief “Malo Pizza, (Small) and Veliki Pizza (large)”. Another night of cabbage and bread but I spiced things up with a little tomato sauce.

Spring is coming, flowers remind me that it won’t be cold forever

Big waterfall, Plitvice NP. I immediately felt small and futile against the roar of water pouring forth in front of me

The rain continued all the next day, and after cycling some 60 km I departed the coast at the city of Senj, and climbed into the interior. A deep canyon, sliced through the ocean cliffs, and I pedaled with undaunted strength through a terrible head wind. I used my international diplomacy techniques (mentioning the names of famous Croatian Athletes, offering Rakija, then open my arms wide and gesturing sleep) to befriend a farmer, and he let me camp in has backyard. All night my tent swayed back and forth in the strong, cold mountain winds.

Strange trees in the Croatian interior 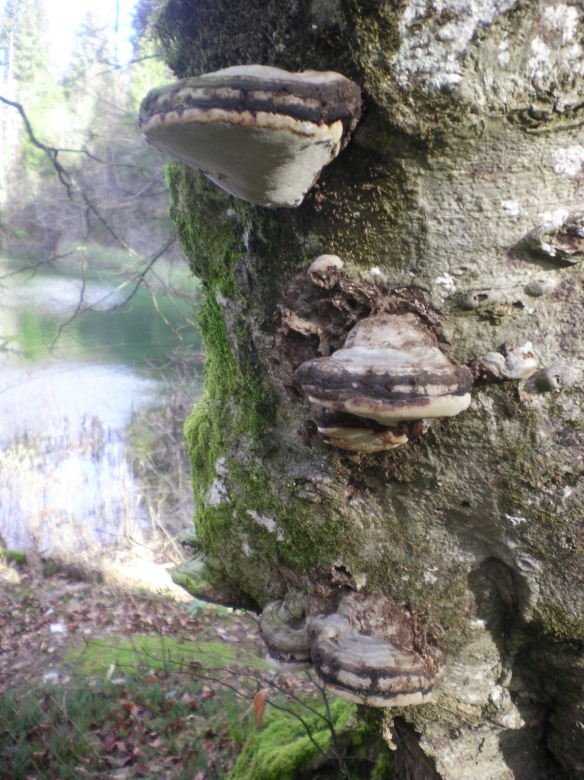 I climbed through fog, hale and fierce winds all the next day, and at one point the wind blew my spare tire from the rack of my bike. A nice Italian couple drove by picked it up and drove it back to me. “Your American right”? They asked. “Crazy”, they said. It is nice to know that other than being known as the “international peace keepers” were are also known as “Crazy”.  I finally arrived within the Plitvica National Park boundaries, but slept outside so that I could load up on supplies for the next few days. 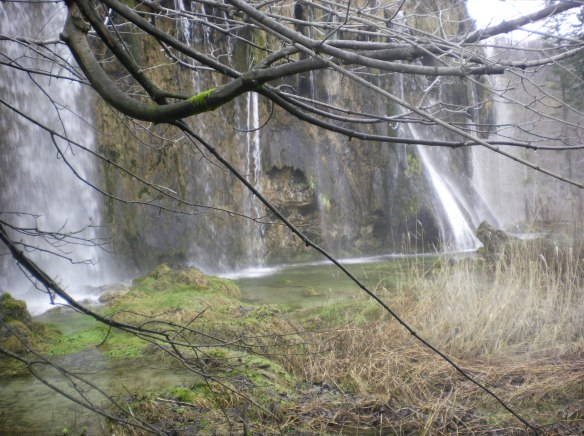 I spent two days walking around the lakes and waterfalls, it was a bit strange that I haven’t encountered anything of this sort in other parts of Croatia

Two loaves of bread, pickled cabbage, ajvar, noodles, crackers, and a local bottle of Rakija. Panniers stuffed, I was ready to enter the park. When I arrived at the entrance there was no one in sight, the guard kiosk was empty and the patrol booth that issued tickets was deserted. I did a bit of off-roading, and managed to sneak into the main park road. There I camped next to a waterfall and the rest is history. Although being hassled by the Rangers I thoroughly recommend visiting the park, it was absolutely beautiful! 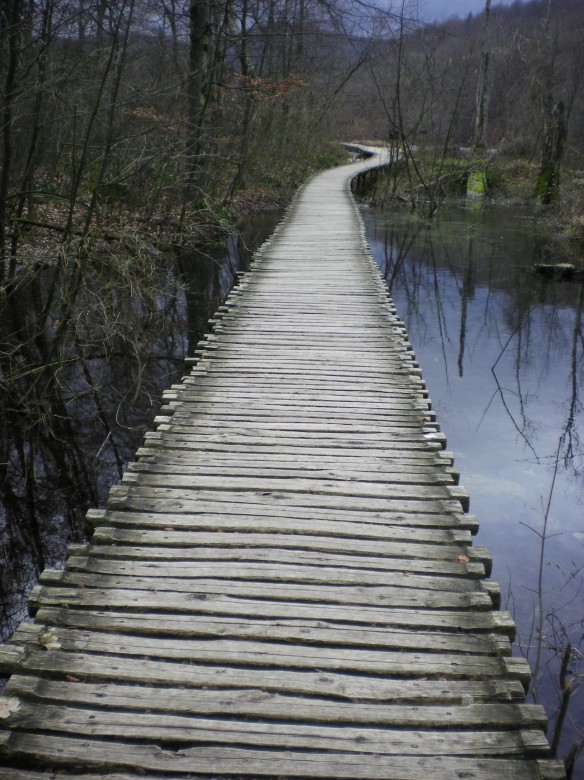 The path continues, we decide: forward or reverse