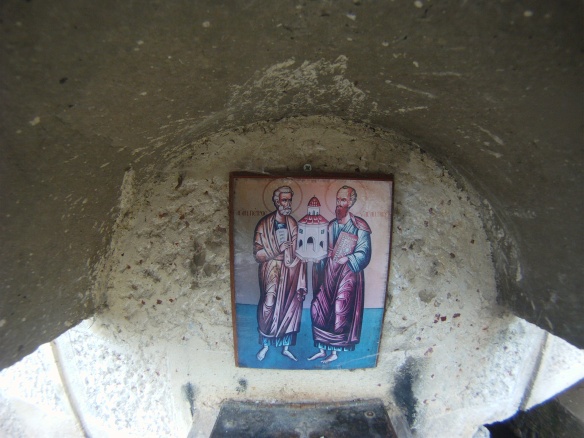 I pedaled away from the Flower Festival and alone again headed into the snowy alps. I felt weak and seemed to have trouble climbing the steeper hills. but blamed my slow progress on the extra weight of handmade, wool traditional Albanian clothes given to me in the village. Towards the end of the day though my stomach started grumbling in an all too familiar way. “FUCK”!! I was a few hours away from coming down with a fever and diarrhea, and was stuck in the cold alps with little food and water.

Cold, windy Albanian Alps are not the desired place to recuperate in a tent

A few along the mountainous road I stopped at a small convenient store with an inventory of junk food. Paprika potato chips, lemon juice soda, chocolate flavored crackers and 4 liters of water filled would be my diet until I could get to a bigger town. A fever was starting to take effect and I knew that if I didn’t find a safe place to camp soon I would end up on the side of the road. Other than struggling up steep hills I had spent the majority of the day fighting off Albanian teenagers. From my encounters that day I made the conclusion that Albanians under the age of 18 spend too much time tending sheep. On at least 6 separate occasions kids threw rocks at me, children would often chase and try to push me off my bike, and many kids with long sticks for tending sheep would try to hit me. These were the brattiest kids I have encountered thus far!

This worried me as I looked for a safe place to camp. The last thing I wanted to deal with was kids trying to steal my gear and throwing rocks at me while fighting off diarrhea in my tent. I pedaled over a grassy field and found a secluded flat area behind a large rock. With great effort I set up camp, and dug the preparatory holes I would need throughout the night. This is the kind of situation where you wish you had a warm hotel room. I ended up camping there for 36 hours and here is the process that I went through throughout both chilly, rainy nights.

1. Wake up to pain in stomach, Unzip and crawl out of warm sleeping bag (hardest step)

5. Crawl back into tent, remove wet clothes and return to sleeping bag

Throughout the first night I repeated the above process at least a dozen times, shivering with a fever. The next day the diarrhea stopped but only because there was no food in my stomach, after eating my recently purchased junk food symptoms returned. The problem with a stomach sickness like this is that you become trapped, there is little muscle and strength to pedal to a nearby city or town for refuge. After the second night I forced myself to pedal out of the alps and into the nearest city 35 km away. One of the hardest things to do pedaling with a fever, chills and forcing yourself to pedal up long steep mountains. Frustration can become unbearable and these are the moments where you contemplate returning home.

Frescoes from the 3rd century AD

I landed in the Albanian border town of Peshkopi. Muddy pot holed streets, large polluting trucks, and dozens of punk kids teaming the streets. This was not where I wanted to recuperate and forced myself to pedal another 20 km into Macedonia. The border guards laughed at my composure as I slowly pedaled up to the kiosk, “Heavy huh” they said to me and laughed, “If you only knew” I responded. The Macedonian border city of “Debar” was very much like Albania and had a population of about 90% Albanians, 4 large Mosques and a small downtown strip with vendors.  The city’s sole hotel rented rooms above apartments on the 5th and 6th floor. No elevator, meaning I had to carry all my gear up the stairs and to make matters worse checkout time was at 10 am. 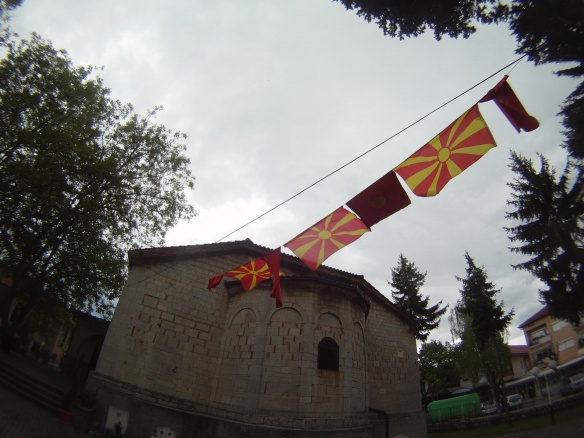 Macedonian flags outside the Orthodox Church

The next day I met a New Yorker on the streets who had recently moved to Debar to work for his fathers concrete business. I learned that most Albanians in New York and Chicago are from the small city of Debar, and he taught me a little bit about how to fabricate a minaret. There are only two large concrete companies in Macedonia and he is soon to be the boss of one, we exchanged emails and I pedaled on somewhat better but still weak. From Debar the road followed the coast of the lake Debar and through a large canyon which feeds water to the nearby lake Ohrid. I passed two touring cyclists along the way, and learned that both of them (Romanian and Dutch) were scared to cycle into Albania. 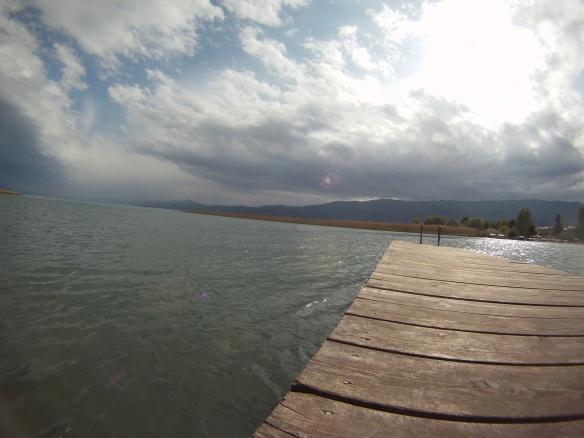 A few minutes of sun on the boardwalk in Struga

I arrived in the city of Struga completely soaked and found a guest house for 7 euros a night. Carrying my gear up a few flights of stairs I met an interesting Englishman by the name of Howard. Howard was close to 80 years old and had spent his entire life traveling on the wealth of his parents. He had never married or fathered any children and was still on the move. He had been to almost every country had spent months on remote islands in the pacific. In the few hours that I spent with him he told me countless stories of the Middle East , Philippines, New Caledonia, and South America. As much as he wanted to impress me with his tales I saw a completely different angle; loneliness. Traveling alone is great but will eventually lead to extreme loneliness, so bad that you are in complete denial.  This man was potentially me in 50 years, and from meeting him I knew right away the direction my current life would lead me in time. 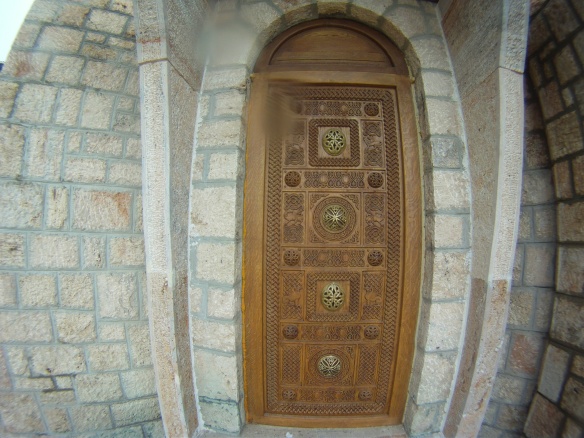 Another rainy day, I pedaled to the historic Orthodox churches in the city and on to the touristy city of Ohrid. Ohrid is a cross between the Croatian city of Pula and Kotor (Montenegro).  An extremely small city built around an ancient fortress, half the city resides on steep hills with narrow cobble stone streets, overlooking the lake which in rough weather resembles a sea. The downtown area consist of several over priced clothing shops, kebab restaurants and a few Alfresco bars. Yesterday while exploring the city I stumbled into a local bar with live Macedonian Polka music. 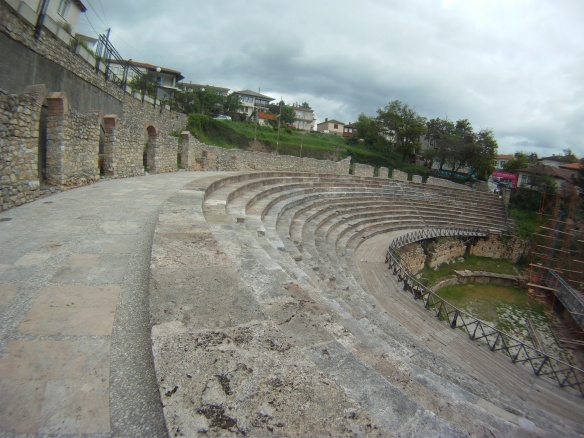 Ohrid area, a lot smaller than the one in Pula Croatia

Another day of exploring the city today and tomorrow I am off the mountains again where I will cross into Greece. Though difficult and at many times painful I am embracing every moment of this trip. I must not forget to be honest with myself. 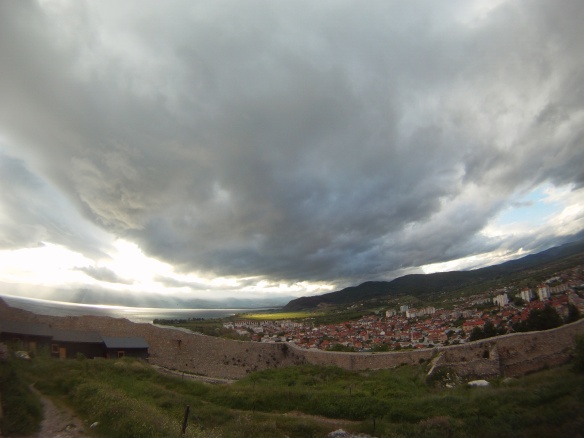 View of Ohrid from the Fortress walls