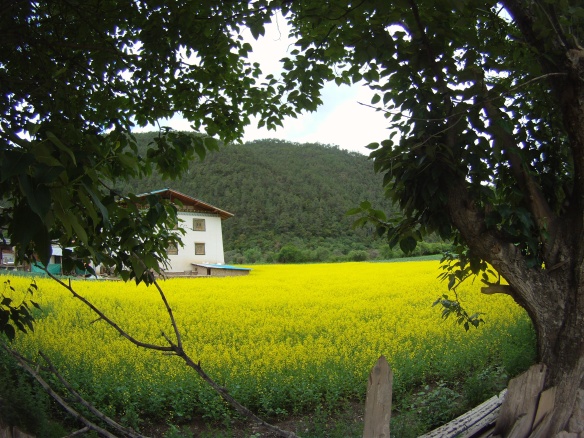 The western provinces of China are a cyclists paradise. Little traffic, remote desolate roads winding through mountains, waterfalls and lush forests. My path, which once crossed endless deserts now never seems to deviate from mountains. Pass after pass, some days it is not uncommon to spend hours climbing only to descend quickly and start all over again. Drinking water becomes a bit difficult in the high altitudes as the boiling temperature drops to close to 80 C, increasing the risk stomach and intestinal problems. Towns and villages are sometimes several days cycling apart which leaves stream water as the only option.I usually seek out locals and ask them for their source of drinking water. In my years on the road I have learned that it is way better to limit your water intake (within reason) than to be stuck in a tent with a fever and diarrhea.

There is a subtle to nature here. Something that almost creeps up, or soaks into your socks like a summer dew. The fresh buds on fur trees, soon to bring summer pine cones, rivers full of fish heading upstream, and a green moss that only grows in the shade. There are thousands of untouched acres, remote temples and secluded yurts. Everything seems to return to nature, wooden fence poles turn into trees, the road splinters with grass and bridges fall back into rivers.

Long mountainous route to Shangri-La, at times this was as good as the road got.

It all becomes distant. When you enter a Chinese city, even your memory of home falls back into the crevice of your mind as noise, traffic and chaos quickly engulf your senses. A man with a plastic yellow work helmet with red paint, paints the road barriers , two women clear and sort vegetables on the dirt side walk, children run to and fro buying sugar coated fried dough before the start of school, trucks honk and cars wiz past, and somewhere in the distance you can hear the electronic tune of “its a small world” getting closer as a large water truck passes spraying water throughout the littered streets. Just a few kilometers away there was a quiet stream with grass, cows and yurts, but here there is nothing that can even remind you, it is in someways so far away.

The tops of passes are always marked with prayer flags. Sometimes you can see the summit hours before reaching her.

Northern Yunnan is warm and humid. The Tibetan minority has given way to a more South East Asian type of people; men smoking bamboo water pipes and women carry baskets filled with wild mushrooms and green vegetables. Hats are red tunics, and clothes are decorated with bright colors. Food too, has become more diverse, the Tibetan staple of T’sampa is replaced with tropical fruits, compressed rice cakes, and spiced meats. There is a high demand for wild herbs, roots and other Chinese medicinal products, and in some parts of the city entire streets are sectioned off for the sale of these goods. 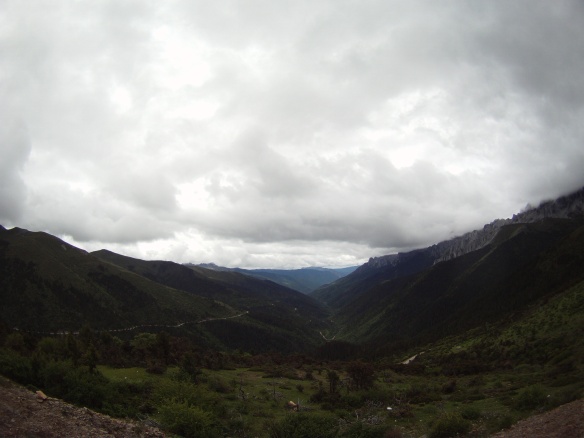 Looking down toward the valley of Shangri-La

The city of Deqen (Zongdian), renamed Shangri-La in 2001 to promote tourism, is from a distance quite like the mythical city. Tucked between two large mountain ranges, nestled beside a large river, the city is in a beautiful location and is home to a very large population of Buddhism monks. However once inside, the city becomes a typical Chinese city with new, poorly constructed buildings, extreme noise pollution and lots of liter. On an up note,  the city has recently given up plastic bags, replacing them with bright colored mesh totes lacking handles. It is a sight to see the locals walking on the streets precariously holding shopping bags between their arms.

I have finally been able to withdraw money from the ATM!! My usual long delay before being denied money was replaced with the sound of counting bills!! I was so excited that I withdrew money several times just to hear it. I will be in Yunnan province for a few weeks before taking a train to visit my family in Guangzhou. I plan to spend several weeks there then return to Yunnan and head to Laos.