The transition from Central to East Asia was not easy. Like a plant that had grown roots from Norway across Europe and into the far east of Central Asia, I was plucked and transplanted to a completely different environment. No longer would there be a struggle to survive or a constant undertone of adrenalin as I pedaled through distant villages ravaged with wild dogs, there was suddenly so much wealth in front of me. I had only taken a few steps off the plane before a runway escalator transported me to immigration, following a quick electronic finger printing and thermal scan for Ebola symptoms, an elevator took me down to the luggage carousel, where friendly airport staff carried my boxed bicycle and panniers through customs. In the bathroom a Mozart piano concerto covered up the sound of flushing toilets and urinals. I quickly realized that the adventurous world which had been so prevalent through the last few months of my life had changed, after traveling thousands of kilometers, I was in more than just a new country.

Dried fish stink up the sidewalks in Seoul, no one guards the fish as I take it stinky fish theft is very uncommon

The Incheon International Airport is located on an island off the north-western coast of the country, about 60 kilometers from the North Korean border. Directly to the west are the two islands of Baengnyeongdo and Daecheongdo, who’s ownership have been the subject of constant conflict between the two countries, not to mention the continuous shelling from both sides across the Demilitarized Zone (DMZ), since the end of the Korean war in the 1950’s. I would quickly observe that the wealth, future and economy of South Korea though currently so stable could quickly fall to the North’s largest standing army, creating constant fear in the government and the minds of many of its citizens.

I boarded the airport railroad and headed towards the capital city of Seoul. Each stop was called in 4 different languages, and I looked out the window and marveled at what looked (after so many months in Central Asia) like a city from the future. Bridges, tunnels and highways intertwined in the shadows of skyscrapers half lost in the clouds of the afternoon overcast sky. Everything was silent. The trail glided effortlessly across the tracks and the passengers sat still and gazed at the screens of their cellphones. A little girl sitting opposite me jumped off her distracted fathers lap and pummeled into my knee, the father taken by surprise quickly put down his cellphone and profusely apologized for his daughter’s misbehavior. No sooner did she return to the parental figures lap did he return to his cellphone.

“Last stop Seoul station” blasted over the intercom in Mandarin, I awoke to find the street car empty and I slid the 28 kilogram bicycle box and 3 over stuffed panniers off the train and into the elevator. “Main floor” the elevator called out, and without pushing a button I was shuttled up 5 stories to the ground level of the city. The doors opened to a long corridor that connected the elevator shaft to the rest of first floor of the train station, pushing and walking slowly I was passed by busy Koreans carrying shopping bags and briefcases, and I looked out the window and noticed that I was walking in a glass tunnel above a large fountain. I since arriving in Korea I had traveled so far but had yet to breathe the outside air. There was small waiting room at the end corridor, “It’s time to put Gabriella back together, and explore a new country” I thought. “Welcome to Korea”. 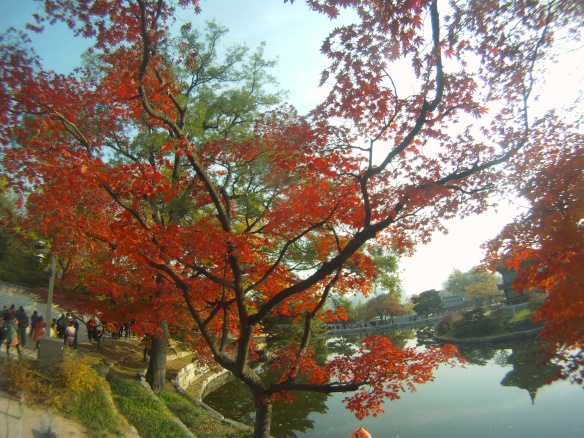 The first Korean word that I learned was “Chi Naga Yo” which means “Please (politely) watch out”. After close to an hour of assembling and repacking Gaby I pedaled through the busy streets trying to navigate my way to the “Old Village” district in town. Cars no longer honked as I took up the entire slow lane, and passed with caution utilizing their yielding lights, showing no sign of road rage. The sidewalks however were a spectacle, a craze of mopeds, cyclists and pedestrians dominating for space. I held my breath as “kamikaze” like Koreans pedaled head-on at full speed on flashy BMX bikes. There was so much commotion between everyone that is seemed like it was all choreographed and that if one person stopped everything would fall apart. A taxi cab pulled up beside me and offered to lead me to my destination. Pedaling on I passed store fronts selling dried fish, pharmacies advertising miracle skin creams and restaurants venting the smell of kimchi into the streets. The traffic signal turned from green to yellow and all cars seemed to stop at the same time letting the mob on the sidewalk pass. Ten minutes later I arrived in the old village district only to be shocked as I watched a large camouflaged truck unload a group of soldiers carrying automatic weapons. “What is this….Israel” I thought. An official directing traffic asked me where I was going and before I answered, I asked him what was going on with all the military troops. “North Korea” he said to me in a heavy accent, and waved me through. 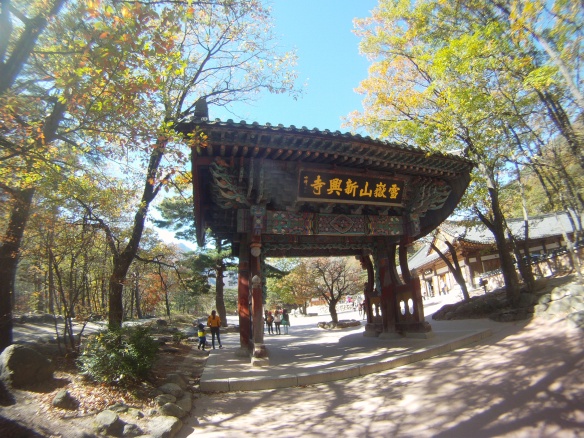 I spent two days in Seoul, half the time wandering through busy streets converted into open shopping malls and the other half try to rest after the long red-eye flight. I was back to the world of Capitalism. Name brand clothing shops dominating the late night shopping scene, and McDonald’s and fast food restaurant chains served hungry customers into the early morning hours in Mypeoeng district. It seemed like every other shop was a 7-11 or CVS convenience store, selling everything from seaweed rice wraps to shampoo and skin cream. I contemplating camping in the forests outlying the city, but decided on a cheap guest house. I worked hard for what little rest I would get struggling for close to an hour at getting Gaby and all my panniers up to the third floor and into a room the size of a closet. Though small it still had all the amenities; TV, refrigerator, shower, toilet, sink and an air conditioner. I was literally in a tiny house that even had an ironing border and a clothes line. The staff was a bit confused when I asked about how much it would cost for me to do laundry, “Its free” they said, “There is also plenty of detergent for you to use as well”. Free laundry! I remembered countless occasions of bargaining with landowners over how much laundry would cost. In Bukhara and Samarkand, the owner wanted $10 for a single load, those times were over.

The next morning I asked for a late checkout and the man at the desk told me I would need to write him a “Thank You” note, and then I could do as I pleased. After writing “Thank You” on a yellow sticky note, he stuck it to his desk with the rest of the thank you notes written in Korean and smiled, I checked out 3 hours later with no hassle.

Seoul sits at the meeting point of 4 large rivers, and I followed a beautiful bike path east towards the more remote part of the country. The path was separate from the main road and traveled over streams, flooded rice patties and on wooded decks through fertile fields. My loaded bicycle drew constant attention and I was repeatedly asked to pose for photographs, eventually leading to a lunch invitation. I made friends with fellow cyclists and at a large bowl with sweet noodles and ice “King’s Noodles”. It is not uncommon for most large cities to have a Teddy Bear Museum and I contemplated visiting until I found out that the entry fee was $15 to see a bunch of Teddy Bears. 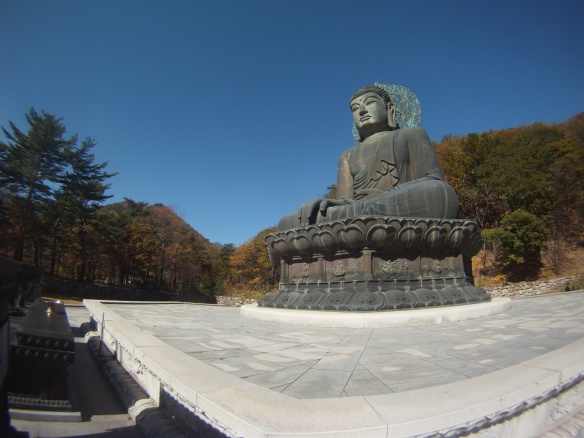 My first night of camping was a bit challenging, as after 4 hours of pedaling I still hadn’t escaped the suburbs of Seoul. After an hour of looking I give up and just put my tent somewhere. Sleeping on a dirt mound between two large tract like houses I awoke the following morning to see both house owners washing their Black Hyundai sports cars. Packing up I pedaled to the nearest 7-11 for breakfast. These stores are seriously the convenience store of the future, free boiling water, use of microwave, WIFI, toilets and tables. Instant noodles are by far the most common food consumed in country. Throughout the streets gutters are usually filled with dried vegetable and noodle remains and sinks in most public restrooms are usually clogged with noodle debris. Large grocery stores, blasting Korean Pop songs sometime on distorted speakers often dedicate a full aisle to all the different flavors of instant noodle. Individual packs are also sold at the cashier beside packs of gum, cigarettes and condoms. 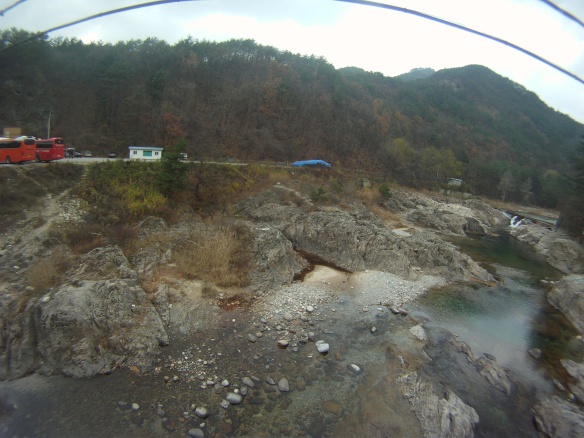 By the third day, I had finally escaped the suburbs of the capital and arrived in a small village. Farmers cleaned and dried fish, hanging them on wooden racks and old women washed cabbage in large plastic buckets preparing to make kimchi. Occasionally I see remnants of older times mixed with the present like a well-used bamboo wheeled barrow with shiny new wheels, or a lien two shack street vendor selling cellphones. There is not much left to be seen of the old, the new is in full force over here, and the youth quickly adapt and forget. This is where China and eventually the rest of South East Asia will be, and it seems like all roads in Asia eventually lead to the same place; development and the adaptation of the western life style. 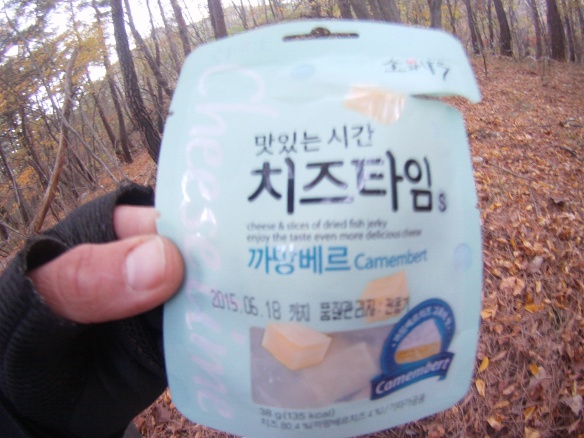 My new favorite snack, dried fish jerky with cheddar cheese, these packets sell out quickly at most stores!

I am in search of the untouched and forgotten lands of South Korea, they must exist somewhere! I will pedal and search the mountainous interior for the remote. Almost as if foreshadowing my first week in the country, no one in Seoul understood the meaning of the word “countryside”. -Julian