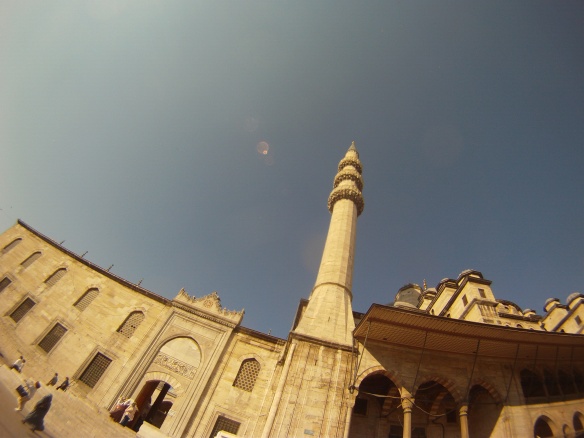 My eyes sting from exhaust fume. The sound of large passing trucks no longer makes me stir. I am 30 km from Istanbul but feel as if I am riding on one of the busiest roads in the world. A once two lane highway has split into 6; compact cars filled with locals, pickup trucks carrying loads of fruit and furniture, lories full with cargo heading to central Asia and motorcycle after motorcycle. A once quiet shoulder has disappeared and now I fight for space with locals on Vespa’s. One, two, three and sometimes four people squeeze on to small motor powered bikes. Just a little further, I tell myself and I will reach the Bosporus, and will begin my adventures in Asia. I pedal on and exit the chaotic highway heading for the ferry terminal. A steep descent brings me to the dividing line between Trace (Western Turkey) and Anatolia (East Turkey, otherwise known as Asia minor). I board a ferry filled with locals and gypsies playing music and watch the large mosques fade away in the horizon, I am officially in Asia.

Trace, the Western portion of Turkey, has a very different feel than Greece. No longer does life look so easy, Turks are working on farms planting crops in the mud, transporting hay in horse pulled buggies and repairing potholes in the roads. Mosques have once again replaced churches and I rejoice to the sound of the evening and morning call to prayer. Upon leaving Greece I ran into the honeymoon cyclists riding with a French couple on trikes. We were all headed in the same direction so we planned to pedal together to Istanbul.

A party of 5, we all pitched our tents in a muddy wheat field and had a pot lucked dinner.. I almost felt homeless when camp next to them. Brand new tents, cooking gear, panniers and bicycles all seem to scoff at the half roll of guerrilla tape holding my tent together. Gaby will show up their brand named touring bikes any day, and new gear draws way too much attention especially in the middle east.

The next day we planned to ride 85 km and meet in the city of Tekirdag. I love camping and hanging out at the end of the day, but while pedaling unless the pace is right riding together in groups on busy highways is not what I consider to be a good time. I pedaled ahead and arrived several hours ahead of them at our meeting point. After a tour of the city, a lunch of local fruits, a 45 minute nap, and a few beers with locals, they see my bike from the road and we reunite. I feel refreshed and alive after close to 3 hours of hanging out but I can tell that my friends are tired. We cycle up a steep hill and I mash up at full speed getting a bit ahead of the group. I jump on the expressway and pedal on en-route to Istanbul. I pull to the shoulder and wait for the pack to catch up, nothing. Fuck.. I lost them again!! Alone again I pedal on and sleep in the front yard of a Kurdish hotel. I set up my tent just before a huge rain storm. 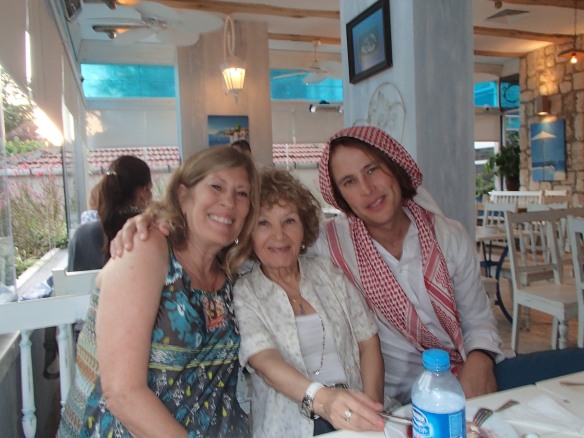 Dinner with host and friends in Istanbul

I wake up after a long night of pouring rain and am offered Turkish chai and breakfast. The Kurdish family that owns the hotel really likes my Jordanian Kifeye and we seem to become instant friends. I learn that traditional Kurdish attire is similar to the Bedouin of the middle east and a few phrases in their native language. “Selove”, other than the Turkish “Merhaba” is their standard greeting but as with all Islamic countries “Salam Allekum” is always well received. The family invites me to come and visit their village tucked in the high mountains between Iraq and Syria, very near an extreme conflict zone, but enticing nonetheless. I think I will go.

After an extremely dangerous commute on the Turkish freeways I was greeted on the Asia side of Istanbul by my two family friends Barbara and Judy. After a celebratory meal, I packed a carry on bag for a 5 day excursion throughout Turkey. With little time to rest we woke up at 3 am and headed to the airport where we flew to the ancient city of Cappadocia located in central Turkey. 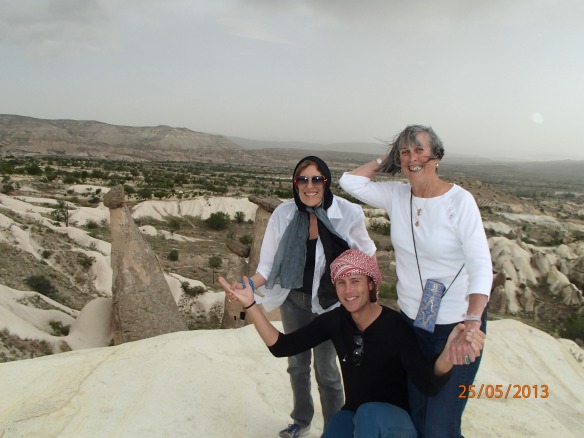 Barbara, Judy and I in the central Turkish desert

One of the oldest cities in the world, Cappadocia was home to many of the ancient civilizations starting with the Hittites in 1600 BC. Millions of years ago volcanic lava covered sandstone rocks, creating a natural wonder after erosion. How nice it is to experience a different type of travel, after arriving at the airport we were picked up and chauffeured in a private car, ate at local truck stops, slept in cave hotels and walked through the ancient city.

Ruins of the ancient city of Ephesus

From Cappadocia we traveled to Kushadasi, a coast city near the ancient Greek city of Ephesus, built-in the 10th century BC. A drastic change from the central desert regions of Turkey, we traveled to the neighboring mountains where the St. Mary lived after the crucifixion, and spent hours marveling at the grandeur of Ephesus. Personally one of the most interesting things was the ancient latrine, which housed one of the first stone Roman toilets! 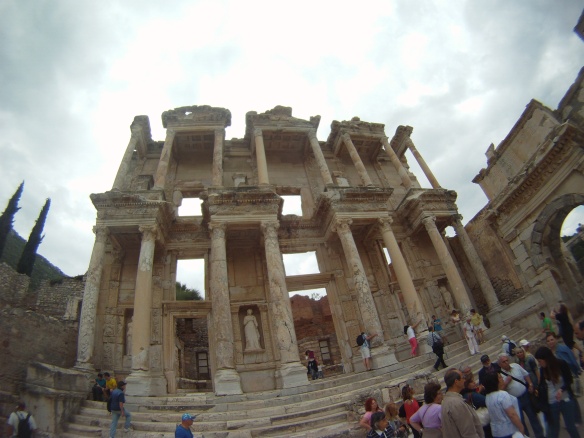 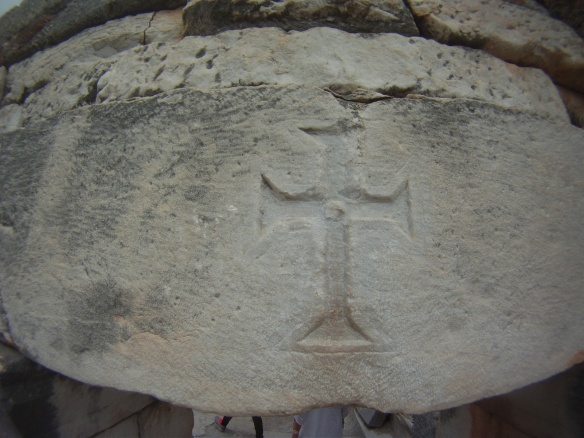 2 hour ferry trip to the Greek island of Samos

The next day we jumped on a boat and headed to the Greek island of Samos. One of the 5 largest islands in Greece, we journeyed to the birth place of Pythagoras, ate lunch on ancient ruins and drank Greek coffee at the marina. Definitely my type of place warm beautiful beaches and a very relaxed Greek atmosphere. From Kusadasi we traveled to the resort city of Bodrum, which was no different from any other resort city. Arriving at night, all culture evaporated, and we were surrounded by European and Russian tourists. The Turkish equivalent of Tijuana, we were glad to find our hotel that was sheltered from the main strip. After a day of exploring the local Ottoman castle and hanging in local cafes we retired to the airport and flew back to Istanbul. 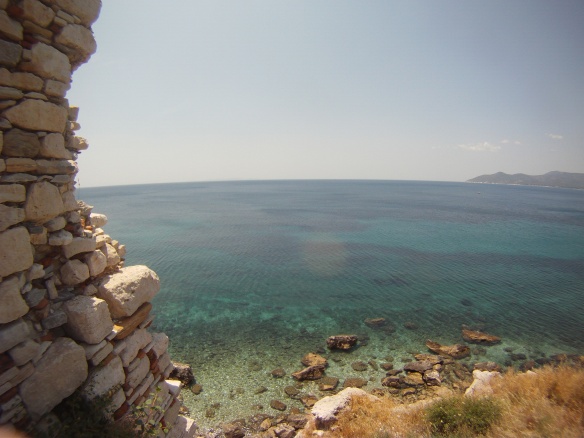 Last remaining pillar at the temple of Artemis, friend of Alexander the Great 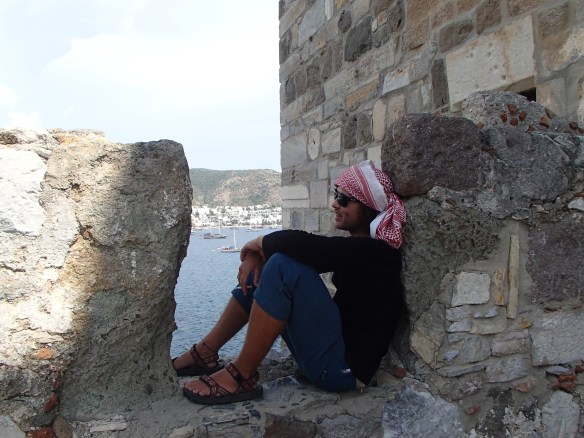 Lounging and unwinding at the Ottoman fortress in Bodrum

Judy and her camel friends

How different things are when you travel by air and automobile. There are no mountains, rivers and deserts to cross and the adventure is taken out of the transportation and becomes the destination. I had a fantastic time and am now ready to discover Istanbul and prepare myself for the Kurdish part of Turkey. I have become very close with my two American friends and am sad that they are leaving tomorrow. As much as I like company I love traveling alone, and continue to look forward to my journey through Turkey and into Georgia. This is the beginning of a new chapter in my adventures, Asia. Istanbul is a fabulous city but personally it is not as exotic as it has always been described. I was expecting more of a middle eastern influence but am constantly surprised how European everything is. 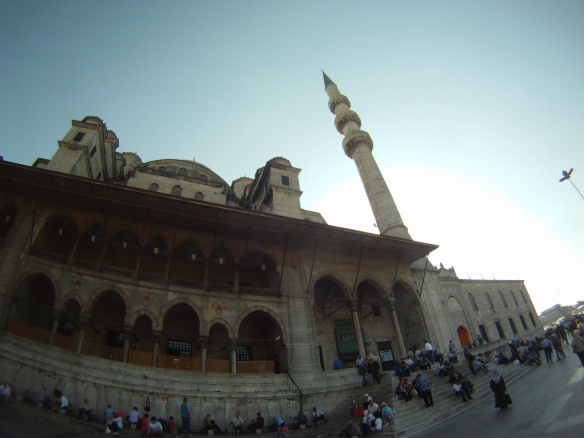 Mihrab, direction of Mecca inside Mosque

The mosques however are absolutely astounding! And I have learned that Turkish is spoken in Azerbaijan and many of the Central Asia countries. Time to start studying! Will touch base again in the next few days, I plan on staying in Istanbul till next week.    –Allahismarladik