These last few days have been really pleasant. Without a schedule and no restrictions on how long I can stay in one place, I have adopted a very relaxed pace. Each day riding no more than 60 km, and sometimes spending several hours exploring the rural villages.  I can carry enough water and food for several days, if I want to be out in the wild, or each day I can cycle to the next village or town and get hot food from the bakery. There is so much freedom on a bicycle, no need to rush to connect with a train or plane, when I am ready I can ride and when I am tired I can stop and sleep in a quiet field.

The water level on the Danube changes drastically over night. While crossing several sections of the road, I would often have to get off the bike and push or ride as fast as I can to get through some of the large streams. At one crossing the mud was misleading and Gaby got stuck. After losing both my sandals and pushing ankle-deep in warm mud I pushed Gaby to safe ground. There was so much mud however that  I could barely get the wheels to spin, let alone use my brakes. After a few km of gummed up tires rand very little braking I arrived at a small fishing village, Dubovac, located on a peninsula. 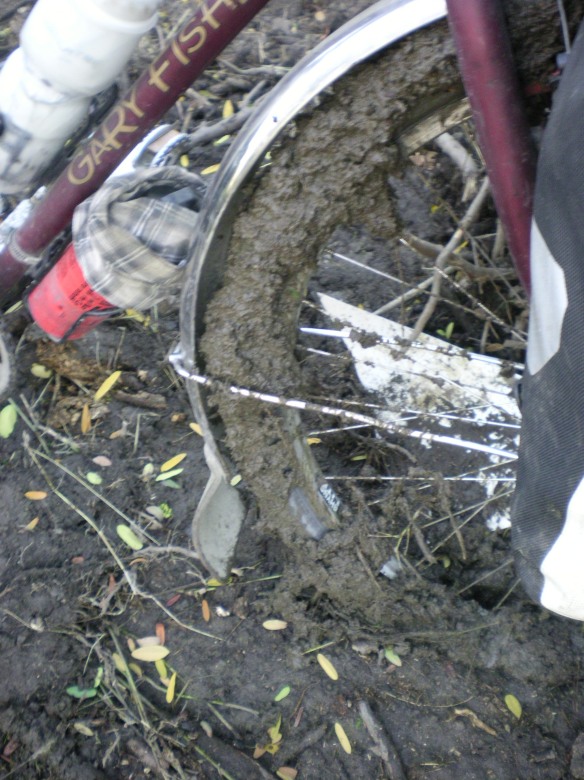 After thoroughly hosing Gaby down, I was invited to wine and Rakia with some construction guys working in the village. They barely spoke English but knew a lot of construction terms in English, they also knew a lot of bad words, we became friends instantly! After drinking a few shots of Rakia and a glass or two of homemade wine cut with Coca-Cola, they pulled out a large metal wok, and fried fresh caught fish in a few cups of bacon fat. 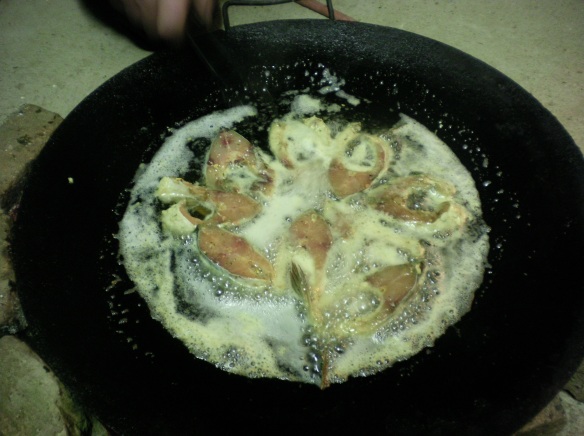 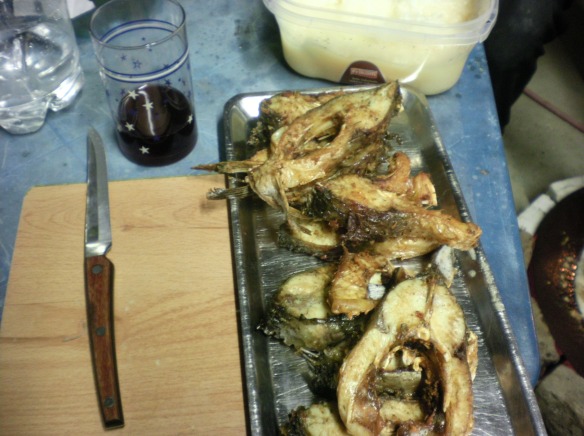 Top it off with bread dipped in the leftover fat and wine cut with cola to wash it down, you will definitely be full after this meal. The ice cream container at the top of the picture is full of bacon fat

After dinner, they offered me a camping spot on the lawn and when they learned that I would be cycling back through the area, invited me to “sarma” (mixed meat cooked in cabbage, supposedly the best Serbian food) and more drinks in their home village Kovin. I said good night to my new friends and set a date for my return party. The peninsula had a very tropical feel, and all night a warm breeze rustled the leaves, and in the distance I could hear the sounds of boats bumping with the tide.

The only passenger on the 30 minute ferry across the Danube

After a breakfast of flat cola and bread, I left the Louisiana like village of Dubovac. The bike path quickly changed from single track, to a full two lane road. The road eventually departed from the Danube, and crossed several orchards and vineyards finally coming to a halt at a small ferry terminal, where I boarded and crossed to the southern side of the river. Departing the ferry I cycled through the small town of Ram, and up a steep hill  past an ancient castle. Rolling hills and Orthodox monasteries, I found a nice camping spot under some plum trees and cooked dinner.

My favorite Serbia breakfast, “Burek” and yogurt. Layered filo dough,  cheese and meat. This one was fresh out of the oven

The next day, I entered the city of Golubac, the official beginning of Djerdep National Park.  I stopped in several stores and eventually found a good market where I packed my panniers full of bread, cabbage (a whole head of cabbage costs less than 10 cents), garlic and water. Not sure when I would see a food store again I carried a few days worth of supplies.

In Poland the grocery store freezers were full of dumplings, here in Serbia and Romania they are full of frozen croissants and other Danish like snacks

Leaving Golubac, the road went straight through a huge castle built by the Serbs in the early 11 century. 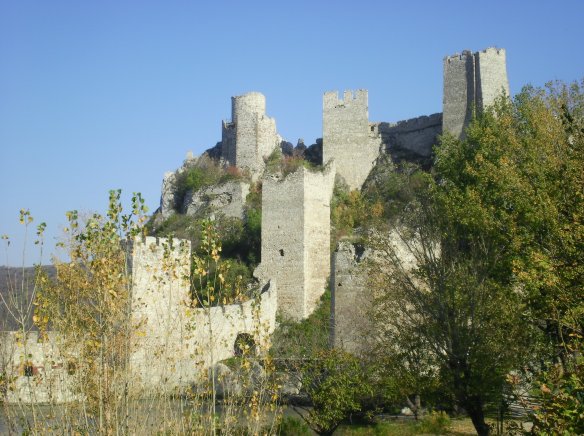 The Turks occupied the castle in the 1300s and during the communist regime the government decided to put a road right through the center of the castle. A great way to mark the entrance to the national park, the river was slowly becoming wedged in a canyon. The road now passed through several tunnels, and in some ways mimicked my epic 2009 ride in Hana, HI. 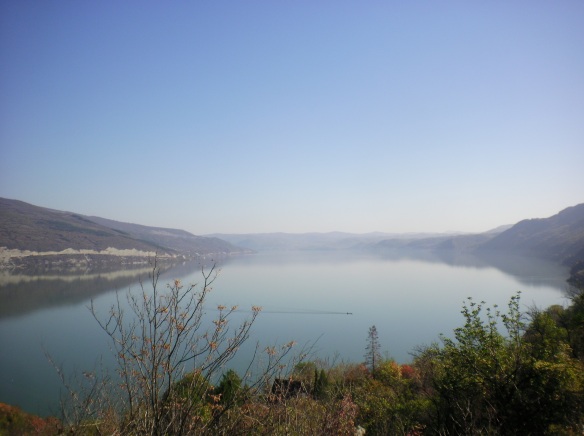 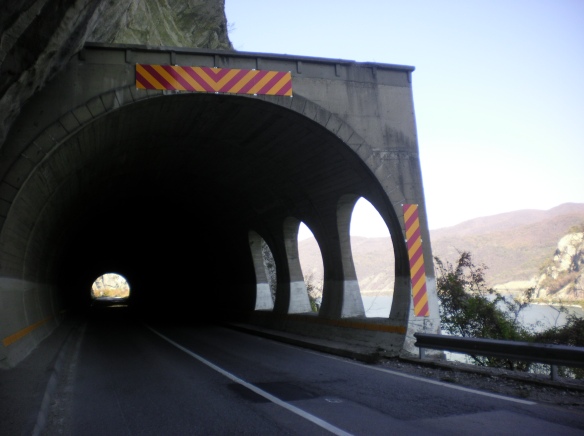 Short tunnels but just long enough for everything to get dark

After another day of riding step cliffs overlooking the river, I approached a side road heading to the highest peak in the park. A steep, rough 6 km, (most of which I had push) the top had a spectacular view of the river and where I sat for a few hours eventually watching the sunset. 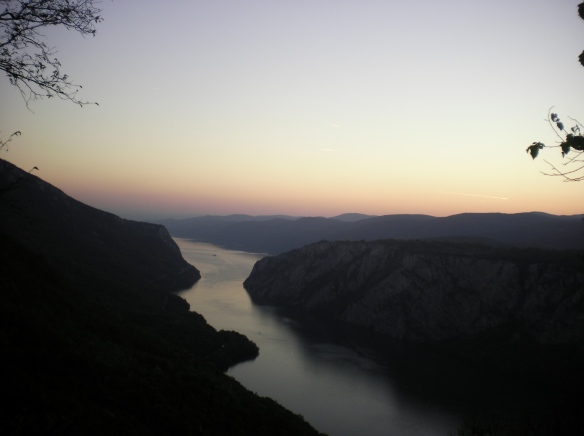 Danube from the Summit

I camped just below the summit, and was awoken several times by a lynx. At first the lynx came to my tent and tried to steal my muesli, when that attempt failed, it started to screech (probably thinking I would run from my tent in fear).  My first attempt at confrontation the lynx it ran away, however later it got more bold. Around 3 am I was awoken again by the “beautiful” screech, I unzipped my tent and turned on my head light, and there, with eyes glaring back at me was a beautiful lynx about the size of a large dog. I picked up a rock, but before I could do anything it ran into the forest.

I will fight a lynx to save my Muesli. Breakfast of champions

Today I cycled out of the national park, and crossed the river to Romania. Compared to the Serbian side of the Danube, an undeveloped national park, the Romania side is very rural with villages and villas built along the water. In the late afternoon I passed Romania’s equivalent of Mt Rushmore, the Statue of Decebalus, a huge face carved into the rocky cliffs.

Statue of Decebalus, this momument took ten years and over a million dollars to build

Vacation is over! There is a meditation retreat in southern Croatia on November 9th, and after reunited with my friends and eating “Sarma” in Kovin, I will be heading west through Bosnia and into Croatia.
HAPPY HALLOWEEN!!