Local Indonesian’s at a Hindu festival

The overnight ferry to Sulawesi was a very Indonesian experience. Wanting to see how the locals traveled, I purchased the “ekonomi” class ticket earlier in the day for 1,333,000 IDR ($10). By night fall the once typical looking Balikpapan port had transformed into a street bazaar with temporary stalls built out of bamboo and plastic lining the road to the terminal office. It was loud, smelly and a world away from my experience with the taking the overnight ferry from Busan, Korea to Fukuoka Japan. Vendors were selling the ever so popular Gem rings and necklaces, pit bbq’s were constructed out of bricks and were roasting various meats and people were squatting on the sidewalks packing/unpacking large crates.

The scene was something out of movie and I pushed Gaby through the chaos toward the large ferry waiting at the dock. The large boat looked rather nice, like a large cruise ship, with fresh paint and several stories of patios with wooden decks. As I got close to the ship I noticed a long line of passengers carry large boxes on their heads. There was a queue at a steep mobile staircase that was three stories high, the stairs were so narrow that luggage had to be carried overhead. There was no way I would get Gaby up into the boat without making several trip so I waited for the rush to die down then slowly making several trips got all my gear up and inside. Once inside personnel inspected my ticket and said “You no first class” “Ekonomi” I said which resulted in some laughter. A security office instructed me towards the economy section of the boat, and told me I could park my bike beside a wall of wooden crates filled with unripe Dragon fruit. 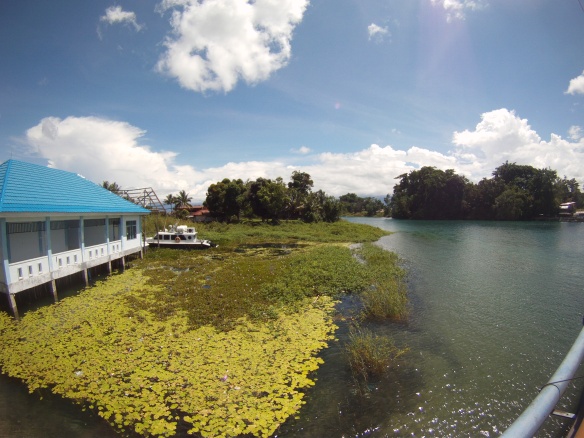 There were few people sleeping on cardboard boxes near the fruit crates, so I took all my panniers with me in search of a place to sleep. The “ekonomi” compartment  consisted of a north and south wing, each filled with rows of connected beds. At first glance it almost looked like a hospital, as the passengers occupying them looked like they had ” moved in”. Laundry was hanging from make shift ornaments in the ceiling, boxes of clothes, medicine and toys were open and spread-out near the corners of the room and on beds, people were cutting their nails, combing their hair, and scrubbing their bodies with extremely worn Gucci/Ralph Lauren towels. The smell of fish and curried chicken filled the room and was being consumed everywhere. Large plastic bags filled with white rice were passed around, while meat products were eaten out of instant noodle Styrofoam bowls. Water bottles filled with soy sauce and chill paste were used to liven the flavor. Some passengers were selling bottles of water and cigarettes which almost gave the room a prison like feel.

Eventually I came across and open bed that was covered in ripped and torn laminate plastic with random cigarette burn-holes. There as room under for my panniers and as I slid them under I noticed that there was a small family of cockroaches living underneath. I took out all my clean clothes and made a huge pillow by wrapping them around my valuables then lay back to rest. I looked up at the ceiling and noticed cockroaches crawling in and out of the cracks, as I looked around the room I noticed more and more of them crawling on the beds, walls and on luggage, people didn’t seem to mind and many were bare foot. Soon I saw a huge rat running under the beds, no one seemed to react. A loud-speaker came on and the captain speaking Indonesian explained that there was no smoking on board and that we would soon depart. There were at least 10 people smoking in the room.

There were a lot of really interesting looking people on board. Most were extremely dark Indonesian men wearing colorful sarongs with long beards and Muslim caps. Women were fully scarved with large earrings making their ears sag. I soon overheard that after stopping in Sulawesi the boat would then head to the city of Sorong in Papua. Most the passengers in economy class were headed there. There was also a rather large group of Yemen pilgrims, one of them saw my Jordanian headscarf and started talking to me in Arabic.

Police force Poso, The chief (to my left) was a classic Asian alpha male! He bossed everyone around, making his subordinates wash my clothes and serve me food, he then gave me one of his rings!

Sulawesi
It was just after 9 am when we I arrived at the port city of Palu. A very similar picture to what I had observed in Balikpapan the port was chaotic and getting Gaby off the boat was just as difficult. From a distance Palu looked like a Norwegian coastal city, with a backdrop of steep mountains touching a turquoise tropical sea. I had been warned earlier about this city as recently violence between radical Islamists and local police had led to the deaths of several people. I packed up Gaby and pedaled toward the interior of the country looking back at a busy harbor beyond and beautiful sea.  A steep 30 km climb took me to the center of the island. If you look at the shape of Sulawesi there a several areas in the north and south were the island is no more than 50 km wide. I was in one of these places and from the top of my climb I could look west to see the coast of Palu and east to an unreached coast. The jungle is must thinner than that of Kalimantan (where in many occasions I could see nothing but a small bit of blue sky) and I can see the mountains far off into the distance and this is always a huge view of the open sky. 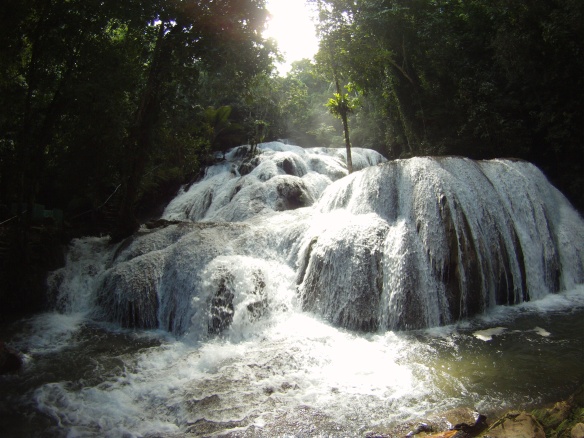 The eastern coast gave me my first taste of Hinduism in Indonesia, as I passed temples and mausoleums erected to the avatars of Shiva. One afternoon, while pedaling through a village I heard the sound of an Indonesian Gamolan followed by clapping coming from a small auditorium. I quickly pedaled inside and found to my surprise a large group of Hindu Indonesians celebrating a holy day. The sight of me pedaling into the festival caused quite a stir, and I was quickly invited to watch the dancing and Gamolan performance followed by an afternoon feast.

More locals at the Hindu festival 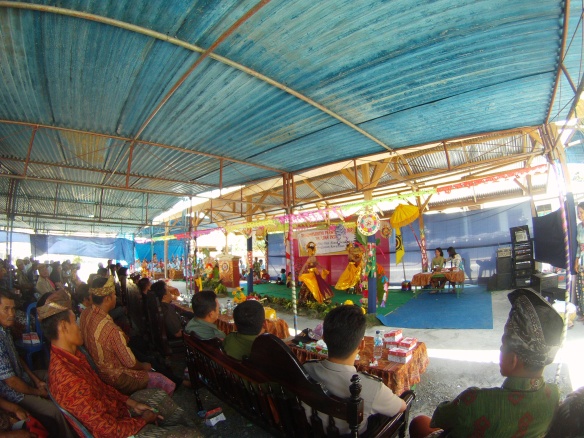 The festival is underway

Later that evening I arrived in the city of Poso (another city I was told to avoid) just before dark. The city seemed like any other city I had passed in Indonesia but in the center near the police station was a large billboard with pictures of local terrorists. I stopped only to refresh my stock of fresh fruits and vegetables then pedaled 10 km out of the city and camped behind a small school. 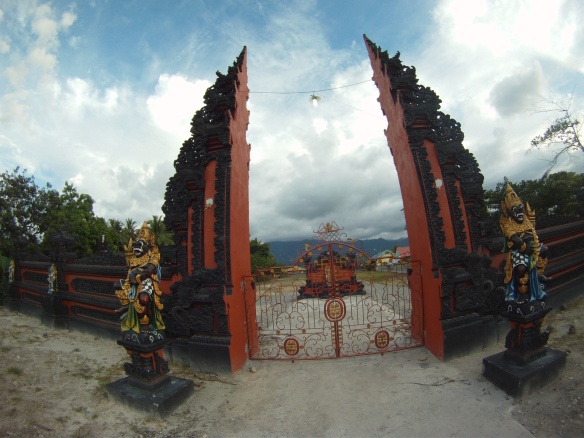 Gates to the Hindu ashram

The next morning I was awoken by a group of 5 military officers carrying machine guns. It turned out that what had looked like an elementary school was actually a military building. My bags were searched for weapons and for a few minutes I thought I was in trouble. The military called the police and I was told to take all my stuff to the police station, where I was detained for a few hours. Once at the station I was given a cup of coffee and told to wait for the police chief to arrive, no other words were spoken and my passport was taken. After close to an hour of waiting a man wearing a uniform with several badges and gold medals walked in to the room. He came over to me and shook my hand. We had a quick conversation in Indonesian, (which mostly consisted of eye contact) but verbally I told him that I was on a world cycle tour and that I had heard that Poso was dangerous so logically I camped in what seemed like the safest place around. 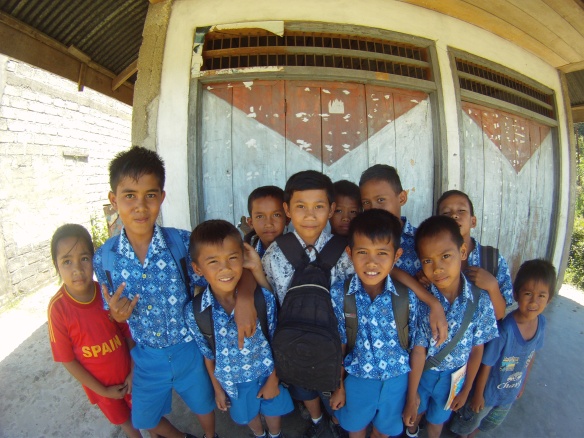 School kids who gathered round to watch me patch a tire

He smiled and seemed to understand. Then yelled something to the officers in the nearby room. A few minutes later, a new clean shirt was brought to me, my dirty one was given to the officer to clean, and a tray of rice, noodles and vegetables arrived for me to eat. Soon I was eating breakfast in the police station wearing a clean new shirt with one of the officers hand washing my dirt one outside. After breakfast the chief took off one of his gem stone rings and gave it to me followed by a handwritten letter giving me permission to camp at any police station in Sulawesi. 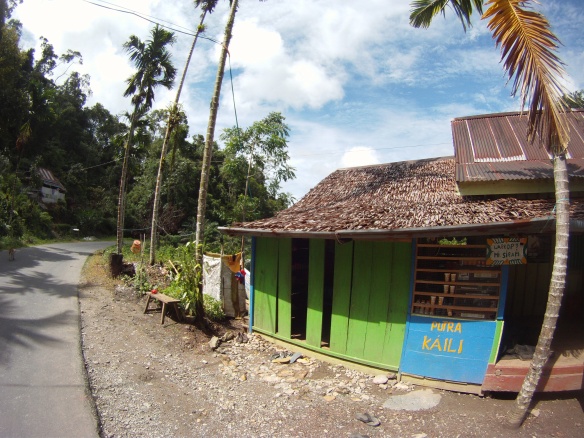 “Warung” or local restaurant. These are found along the road and serve instant noodles, fried rice and coffee.

I didn’t make it to a police station that night but camped near the beautiful Lake Poso. Within minutes of setting up camp I heard a loud sound in the trees and within seconds it began to pour. I quickly shoved all my gear inside, and prepared for the worst. The worst however didn’t come from the sky but rather from the lake, soon mosquitos started making their way through the storm and underneath my tent fly. Hundreds of large hungry mosquitos covered the outside of my inner tent and the sound of their buzz almost drowned out the rain. I ran outside to shake the fly to get them to disperse but even outside in the rain they flocked to my arms legs and face and bite every open part of open skin. I ran back inside, and spent the night too scared to unzip the tent. The rain battered on a soon water was flowing underneath me. I tried to sleep but my bag and mat were soaked and all night I listened to the buz of hundreds of mosquitos waiting for me to unzip my door.
I am now in southern Sulawesi and will travel to the tribal and historic village of Tana Toraja tomorrow. 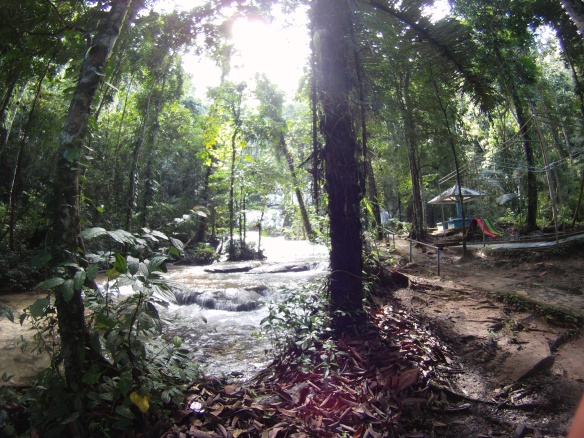