Guest of honor down a long, steep dirt road, the village of Panici in Toraja.

The roads in Sulawesi are in far better condition and in many ways seem flat compared to those of Kalimantan. Leaving the lake side city of Palopo, in central Sulawesi, I was surprised to find the 60 km climb to Tana Toraja rather enjoyable. The heat quickly gave way to thick fog, and I climbed almost effortlessly passed wild coffee plants and small villages. Soon a unique house-like structure began popping up in each village, and I began to wonder what was inside.  Tana Toraja is a large, mountainous area consisting of two cities Rantepao and Makale and many villages. Famed for its ancient burial traditions, cliff tombs and coffee I pedaled on looking forward to a few days rest out of the heat and in the seclusion of the jungle.

Alang. Torajan structures found throughout Tana Toraja. I at first thought these contained human remains but quickly found that they are used to keep and dry rice grain.

Close up of an Alang, many of these structures are elaborately decorated and sometimes contain several tons of rice.

The busy city of Rantepao gives a rather poor impression of what Tana Toraja has to offer. From entrance to departure, it is a typical Indonesian city; loud, stinky and filled with street vendors selling tourist trinkets and overly priced maps to unknown grave sites. Christianity is the dominate religion throughout Toraja making pork the main staple. I soon began to see sign after sign advertising the local favorite Bakso, a pork ball soup usually accompanied with noodles and lots of chili sauce. 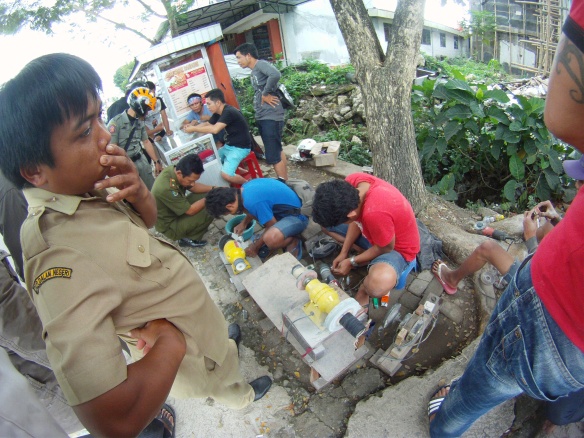 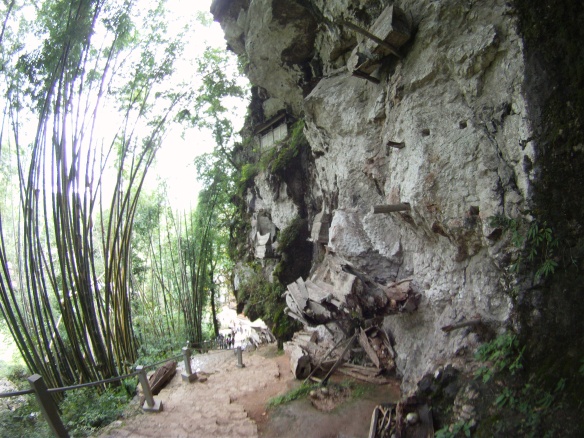 Burial mountain in the Torajan village of  Kete Kesu. There must have been hundreds of bodies buried in this mountain, many in unmarked graves.

After many conversations in broken English and Indonesian I learned that when a Torajan dies the body is immediately injected with a preservative preventing further decay. The body is then place either in the home (with the family) or in a separate building nearby where the body rests until the funeral. The funeral often take place many months or years after death away, giving the family and friends of the deceased an adjustment time to deal with the loss. This is practiced by most of the Torajans in the area, however there is a small percentage of Muslim Torajans that have stopped following the tradition.

Bones and human remains found inside wooden coffins, cigarettes were placed next to some of the remains as offerings. ( I wonder how many of the deceased died of lung disease or smoking related illnesses)

Mobile rice processing across the street from the Kete Kesu tomb.

Beautiful brown rice on it way to becoming white. 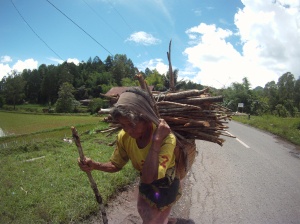 I passed this old lady carrying fire wood. She must have been close to 80! Just another day in Tana Toraja.

More roadside villagers, these ladies were returning home after a day in the fields.

Rice fields in the upper mountains of Toraja.

I met a few locals in the village of Panici, who invited me to stay. This was breakfast the next day, fried pork fat and rice. Agrei worked for the local coffee plantation and is pictured here with his daughter.

A tour of the coffee plantation. The plantation is owned by a Japanese man who exports most of the harvested beans.

Inside the plantation. Each bean is individually inspected by a local Torajan! Only 10% make it into a cup of this plantations top notch coffee. 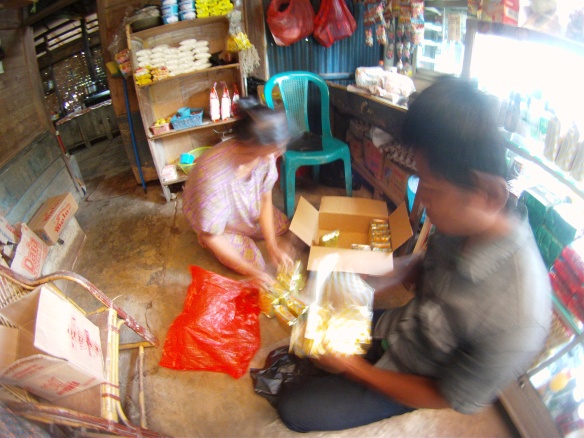 Fresh roast, I bought 4 pounds of Arabika coffee from the store house of the plantation at an expensive local price of $3 a pound. The grounds now fill the majority of my rear right pannier

Ever heard of “Tuak”? Local alcohol made from the juice of an “E-Ju” tree. This is the local brewer’s house, he gave me a complementary bottle. 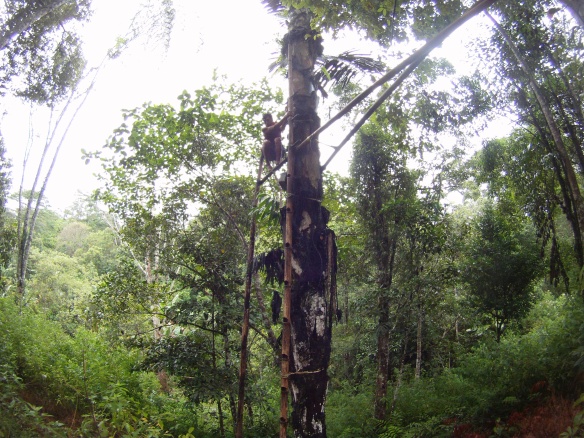 “E-Ju” tree and bamboo ladder apparatus. The brewer slowly collects the juice which is then naturally fermented into a wine like beverage. Tuak is sold in two forms “Tuak Manis” which is sweet and contains were little alcohol and “Tuak Alcohol”. While staying in the village of Panici I drank a bottle of Tuak alcohol that was infused with durian. 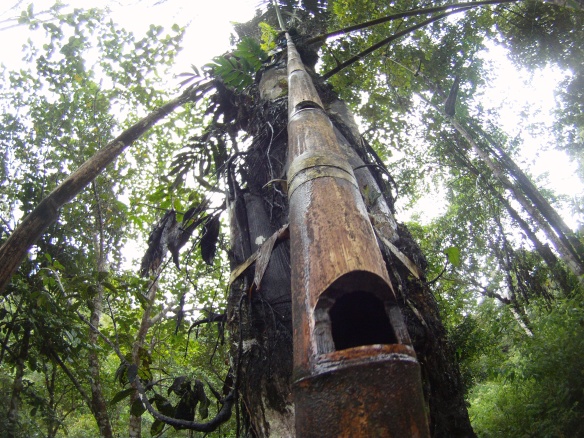 Lower hills of Tana Toraja, Corn drying in the sun.

Tomorrow I leave the remote and exotic island of Sulawesi  and begin my travels on the central island of Java. I will head to the Buddhist monument of Borobudur then pedal towards Bali. Touch base again soon!!