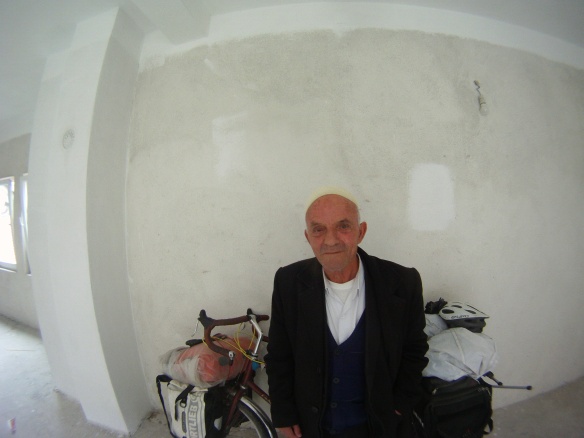 “Goran” is a minority group of Muslims living in the high mountains of southern Kosovo. Goran man poses by Gaby in the village of Restilice.

Closed!! The epic Kosovo/Macedonian border, which I had traveled so far to reach is closed. The highest border in the area, over 6,000 feet, located at the top of the snow-capped mountains is not only closed for tourists, but is completely snowed in. I turned around kilometers from Macedonia and had no choice but to retrace my steps back to Albania. In a way burned my bridge by entering Kosovo illegally and now I planned on returning to the same border that denied me access to Kosovo and ask them to let me back into Albania. My other option was to try to sneak back into Albania but pushing Gaby up the steep sheep trails, in the cold morning rain did not seem too enticing. 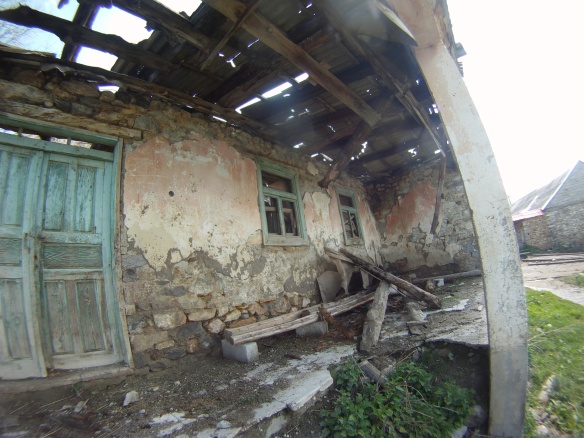 Pedaling the steep muddy roads to the border, I held my breath as I reached the guard kiosk. If I am denied access to Albania here I will have to pedal over 300 km northeast to get back to where I started. The guard was reading the daily paper and as always was extremely surprised to see a cyclist on at the mountainous border. “Hello” he shouted, ” America and Albania friends”! He shook my hand and let me through after glancing at my passport, if only all borders were this easy.

Back in Albania again, I decided to return to the village of Novosej where two days earlier I had met my friends who had helped me into Kosovo. The once quiet and lonely village was now bustling with people of all ages, and many women were dressed in bright-colored costumes. “Welcome to the Flower Festival”, a man in a sport jacket said. “I teach English at the neighboring village, and it would be my pleasure to have you stay with my family for the festival”. The “Flower Festival” seemed pretty interesting but staying in the village meant that I could learn about Albanian village life, as well as sleep in one of the ever-present rock houses. It also meant that I could start partying!! 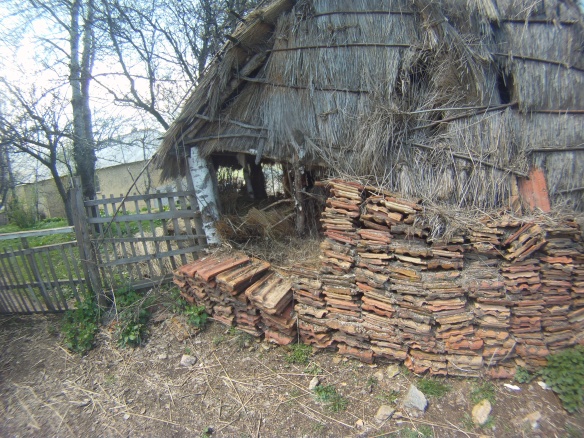 The village center was now getting prepped for the traditional dance ceremony. Musicians were tuning middle eastern looking instruments, girls finishing their costumes and men practicing their traditional dance moves. The village was in the backdrop of snow-capped mountains and was towered by the Minaret at the local Mosque. The dancing started before the music. Men and women hand in hand formed a large circle and started doing footwork to an imaginary beat. Soon as if the tempo had already been determined the music joined the rhythm of the dancers. Men danced with women but on the side lines the sexes were clearly separated, almost like being at a 6th grade dance all the women were on one side of the center and all the men on the other. Most of the songs sounded the same but the singer would often hold extremely long notes with a very narrow vibrato which seemed to echo throughout the village.

I was attracting too much attention and constantly had a circle of people around me asking questions. On several occasions men would come up to me with their daughters and offer their hands in marriage. “Your daughter is beautiful really but no I am not ready for marriage”. I became overwhelmed and decided to wander around the village. Soon my host found me and invited me to a late lunch in his home with this extended family.

The family chief teaches me how to make and cut “Flee”

While staying in the village of Novosej all meals were the same and consisted of several of the following traditional dishes; Flee (thin dough baked in a circular pan, saturated in fat and syrup), Jeez (Cow or Goat Kurd served with spicy peppers), Diath (Thick slices of goat cheese),  jumesht (Goat or Cow milk), Buke (home-baked bread) and Change (Lamb meat). Sometimes if I was lucky there would be salad on the table which usually consisted of chopped onions, cucumbers and tomatoes. While eating I was introduced to the extended family, half the village was family and almost everyone was someone’s cousin or nephew. I quickly locked eyes with a young girl by the name of Rilinda who was my hosts cousin. She spoke some English and to the notice of others we were attracted. 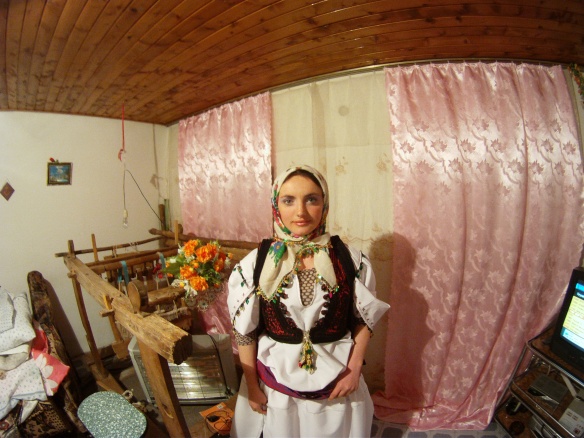 At sunset the whole village journeyed out to the forest to pick auspicious flowering birch tree branches, which would be kept until the following year. All branches picked must at least be at the head height of the picker and can not touch the ground. I picked few branches and watched as the crowed gathered around and collected countless branches.

This part of the Festival reminded me a lot of Chinese New Year. Where every year, on the first new moon of the year, usually in early February, my family, led by my ambitions father, would travel around my hometown of Murrieta  looking for flowering Plum blossom branches for the family shrine. It’s not that we couldn’t grow plum blossoms on our land, on the contrary every house our family lived in always had a plum blossom tree but strangely enough they would rarely blossom at the right time for New Year. This usually lead my father and I on missions through town looking for flowering branches. This journey throughout town has become part of the celebration, and on my fathers last Chinese New Year I remember filling up his beautiful Lexus full of flowering branches growing on Clinton Keith and Calle De Oso Oro. 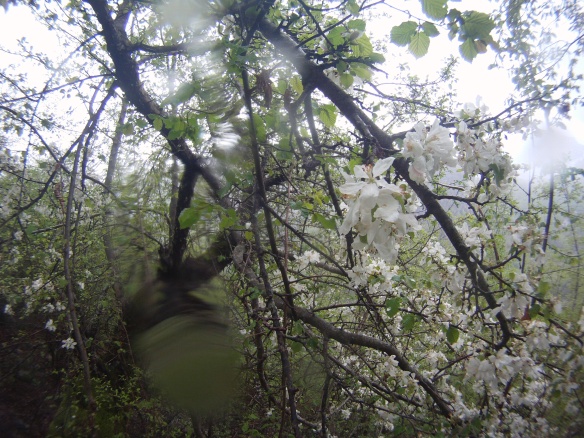 At 9 pm I heard the call to prayer from the local Mosque in the village and decided it was time for me to learn how to pray to Allah. After performing Obdest,( the ritual cleaning) I walked the stairs to the top of the Mosque and learned the proper method of Islam prayer. I retired to the stone house of my host, and slept in a cozy wooden bed near the fire-place. All night I heard the sounds of chickens, sheep, cows and the guard dog. But seemed to find some peace in the early hours of the morning.

Rilinda woke me up in the morning and asked me stay another day and sleep at her house that night. She said she would do my laundry if I stayed another day with her and I agreed. Together with her parents we walked to the neighboring village of Shishtavec where he uncle was having a party. The village, almost as interesting as the party, still had Leninism and Marxism written in bold letters on the largest building in the center.

The party was a real hoot, Rilinda’s uncle an accordion player, played traditional tunes while the family and I danced and sang. The food, extremely filling as always, filled the large tables in the small house. After a few hours of dancing and eating we retired back to Novosej to Rilinda’s house. “Do you want to come with me and milk a cow” Rilinda asked, “Sure” So I learned how to milk a happy cow in the Albanian countryside. Later Rilinda’s mother taught me to make goat milk kurd and then showed me her quilting collection of Albanian rugs, clothes and costumes. 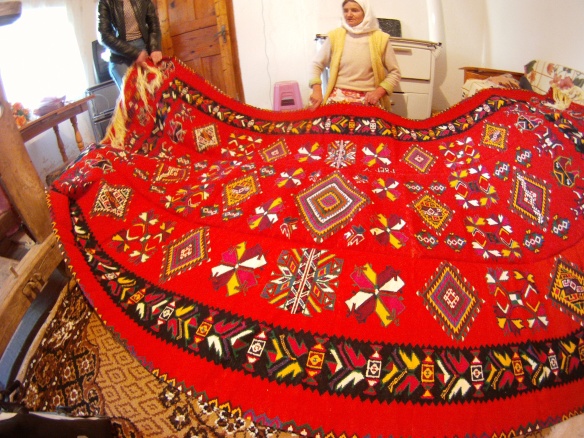 That night, while sleeping I was guarded by Rilinda’s father who slept on the couch next to my bed. However I caught Rilinda in the hallway and kissed her, goodbye my Albanian princess, and I returned to sleep. 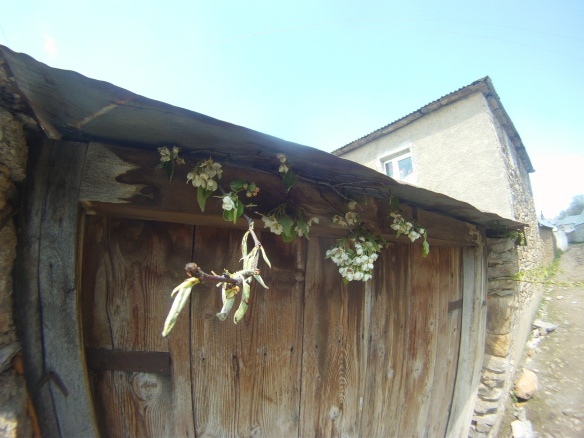 I am now headed the long way through the center of Albania into Macedonia. 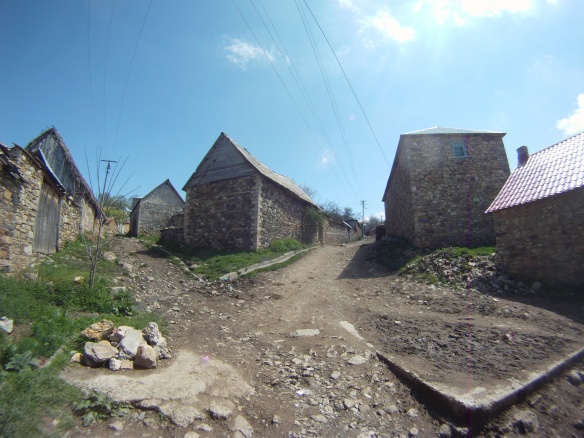