The size of Australia is quite shocking. Even the distances between supermarkets, gas stations and rest areas can be hundreds of kilometers. I am greeted each evening with the sight of kangaroos and owls along the roadside and awaken each morning by wandering hawks.

Buely falls. A few days of easy cycling and swimming in Darwin’s nearby Litchfield National Park. The park has the only safe swimming pools devoid of Crocodiles.

I the hospitality and generous nature of people has quickly vanished. On a daily basis I am kicked out (and into the hot sun) from road houses, gas stations and shady overhangs. I am constantly reminded “Customers only”. This even applies to the shade of a tree in front of a restaurant! Yesterday evening I stopped outside of a restaurant to rest in the shade, after a few minutes the chief walked out and cussed me out for using the veranda and not being a customer. I would be a customer but Australia is just too expensive.

Late afternoon sun at Wangi falls. Crocs are often pulled out of these pools but that doesn’t stop the locals as wells as myself from going in for a dip!

Last night while camping in the desert I was awoken at midnight by a caravan of drunk aboriginals. My tent was literally right next to their car shielded by a manzanita bush. They soon became quite belligerent breaking bottles and yelling. So I quickly packed up my gear and pedaled away into the night. There is a huge separation between the aboriginals and whites here. And both races seem to completely ignore the other. All the supermarkets and restaurants are filled with whites and the streets and parks are littered with aboriginals asking for money and cigarettes. Police guard the bottle shops and all cities in the Northern Territory have a strict enforcement against public drinking. 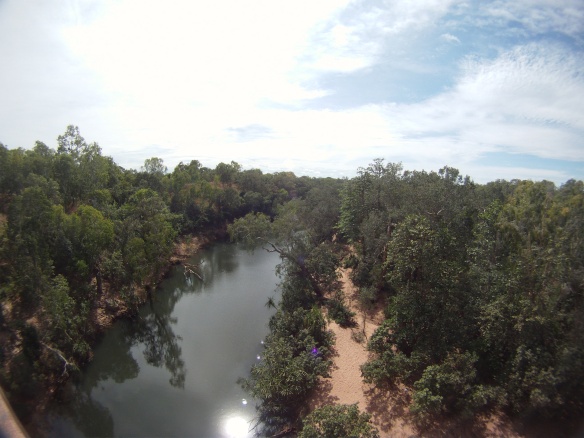 Don’t even think about going in for a swim or getting within a few meters of the local rivers! Crocodile heaven

I feel as if publicly I am seen as somewhere between the gentile whites and aboriginals. But at least people make eye contact with me, most the aboriginals can’t even get that.

The road to Cairns (Cans) is going to be rough!! Long sections of dirt roads with distances between water stops sometimes over 200 km. In two days my route diverts from the main road and it may be sometime before I post again. Wish me luck!!