I didn’t know it at the time. But I was lucky. I left Urumqi and confidently pedaled south into the mountains. In the distance I could see a storm gathering and the once snow capped mountains were no longer visible. My cadence was sporadic, my chain just didn’t seem to stay in gear. When I got to the lower foothills I took a closer look and decided to turn back, as there was no way I could ride 350 km at my current pace. That night a snow storm covered the foothills, road and mountains and somewhere a landslide closed the main road in both directions.

A dry summit, after pedaling to the Turpan Depression, 500 ft below sea level, there little to do but go up! A long 50 km climb to the top of this pass.

After following a few Chinese cyclists dressed in Lycra, I returned  to Urumqi and found the bicycle shop area. It was A long alley filled with all sorts of bikes; fat, cruisers, mountain, fixies even unicycles. By that time I knew I needed more than just a chain, so I started asking around. First shop, “no” second shop “no” third “no”. One shop owner told me that most people just buy a new bike when they need to replace a part! And asked me if I wanted to buy a new bike! Finally I came across a small roadside shop and convinced the owner to take the parts off of a bike he was selling. It took a few hours but I got what I needed and installed everything curbside.

Osh or Pilaf. The Rice a roni’s great ancestor, and large wok cooked in lamb fat, carrots, onion and garlic. 15 yen for a plate with meat, 5 yen without.

Finding a place to stay is so difficult that I contemplated pedaled back out of the city to camp. In some ways there is almost no point in asking how much a room costs as most hotels can not accept foreign guests! I ended up at another 3-4 star hotel and spent 5 days worth of food money on one night! (Couchsurfing is also a problem as most police in Xinjiang do not allow foreigners to stay with individuals). Anyhow, I spent a nice day in the Muslim district and as it was Friday, I pushed my way back into the hub of the Muslin quarter to see what prayer time was like. 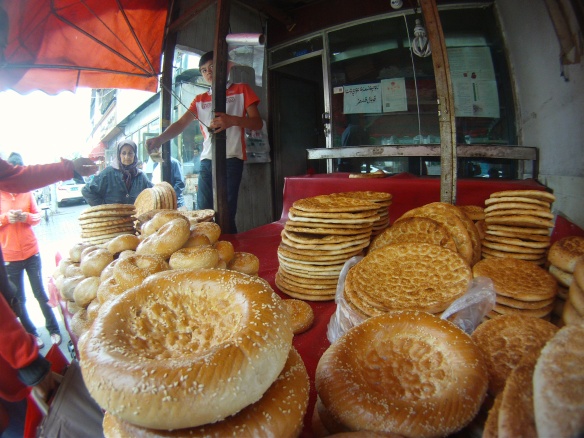 Naan. Central Asian bread. A good piece of Naan is cracker like in the inside, (crispy and crunchy), and bread like (doughy and soft) on the crust. I like the thin large pieces with seseame seeds best. However sometimes I will settle for the bagel looking like ones in the middle because they are sweet! Usually around 2-4 yen a piece. Made fresh daily in a large circular oven.

Traffic was backed up for miles but I weaved in and out, and suddenly I found myself at the largest mosque in the city. The side walks were filled with men sitting, knees down on top of small, colorful, hand woven-carpets, all sitting in silence, waiting for the call to prayer. The road emptied. I watched, listened and prayed, surrounded by devotees and Chinese riot police.

I don’t think anyone could say China or rather Xinjiang was dangerous There are literally police everywhere. All the bus stops, subway tunnels, intersections and gas stations have check points, and the banks, supermarkets, and hotels have guards operating x-ray machines and metal detectors. The presence is extremely noticeable in the Muslim districts and during prayer time there were fully armed riot police waiting for unrest. From what I have heard there were several Uighur riots during the Xinjiang Conflict of 2009 and 2014. Many Uighur openly feel and have expressed that Xinjiang is an independent country and that the Peoples Republic of China is occupying their land. The PRC has responded with a strong police presence and many discriminatory policies. 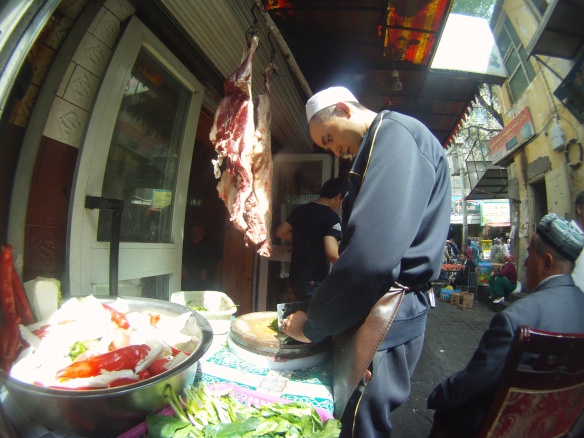 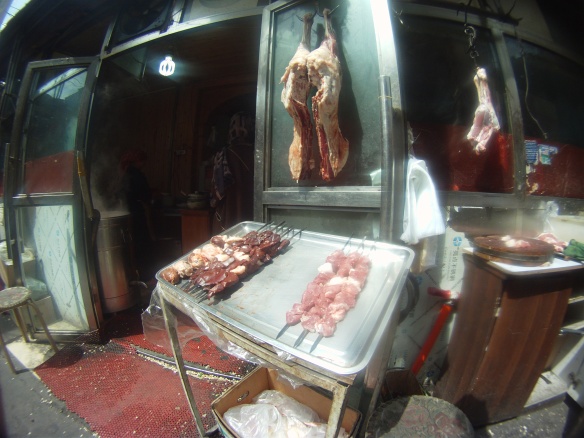 I no longer eat street meat, as I have been sick countless times. However I will still eat the meat pastries.

After Friday prayer most people return to their places of business and rest, but many go to eat! This is the norm for Muslims on Friday, as it is considered the Sabbath. Leaving the Mosque I looked for the most local “hole in the wall” Muslim restaurant I could find and quickly found myself surrounded by Uighur’s sitting at small shared tables.
Considering the situation, and how much I must have stuck out wearing a baseball hat and sunglasses, I surprisingly did not draw much attention. Ordering the norm, a bowl of Lagh Mian I had a conversation with my table mates in Veyu and Mandarin. They told me all about the riots and that the Uighur historic city of Kashgar has almost completely been rebuilt with large Chinese hotels and businesses. I was happy to tell them that I was American and wished them well, I hope that it may lead to a better reputation in the Muslim world. I get a very mixed response from the locals, they are either super grumpy like “Ramadan a full day of fasting and no water” grumpy or they are exceptionally kind. I just wish I could get an idea which is which before I connect.

Camping among the reeds. I was swarmed by mosquitoes minutes after propping up Esperanza.

Leaving the city once more I crossed paths with a few Chinese cyclists who had recently returned from Lhasa. (Another ethnic minority suppressed by the PRC). They wanted to join me on my route south but I repeatedly declined the invitation and proceeded alone. No matter how lonely the road gets I still enjoy the challenge of doing everything myself.
My new route south took me down to the lowest point in Central Asia The Turpan Depression, 505 ft below sea level. Within a 100 km from Urumqi few hours the weather became hot and dry. I camped in a small oasis areas but found the ticks and mosquitoes almost unbearable. 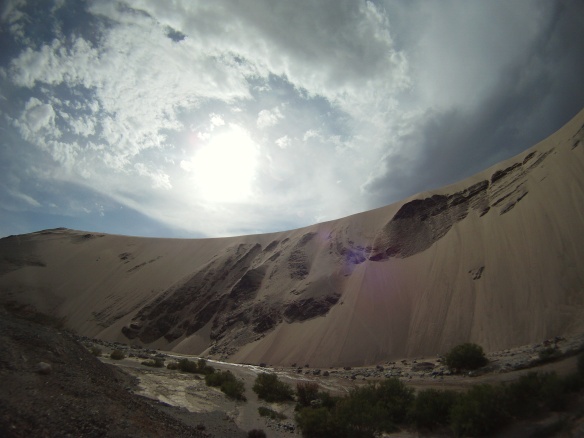 Turpan Depression, in some areas there is literally a large hole in the ground

As many times as I have visited China I still find myself completely amazed by the size, traffic and population of the cities. On some days I come across cities tucked away behind step mountains in the far remote corners of the province, completely surrounded by desert. The cities are usually more like “towns” as it is not uncommon to hear someone say “You know… this is not really a city its more of a town…. the population is small maybe about about 700,000 to 1 million people”. These “towns” are being developed at an extremely rapid rate, with large apartment buildings, hotels and universities. From a far I can almost always spot a few cranes and soon to be future apartment buildings. I sometimes wonder, with still so much development how can the economy be doing so bad?

King of the road. Just another day at a Chinese intersection. There is no country other than maybe the Philippines that is like this. The traffic lights are considered a “suggestion”.

I am currently in the city of Korla (just below the Tian Shan mtns) headed south east to Chengdu, Sichuan. There is very little in terms of services between here and there.

I leave tomorrow for a long trip through the desert. The Qinghai city of Golmud is 1,100 km from here and I hope to be there in less than 2 weeks.