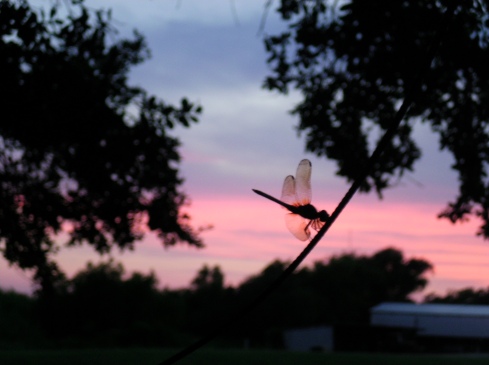 Dragon fly in the Louisiana sunset

Two hard days of riding to Louisiana. Leaving Conroe, TX I hitched a 30 mile ride on the interstate with a moving truck. The hold was empty except for 3 passengers who were found found lounging on rugs drinking beer and smoking. I lifted my bike to the hold and joined them in their celebration. These guys had just finished moving furniture from Conroe to Seattle and could now rest for a few days in their home state.  I pedaled 75 miles from Cleveland to Beaumont. East Texas is a whole different country. Culture, climate and landscape, welcome to the swamp, and say hello to your friendly African-American neighbors. Except for the police force the whole city of Beaumont and Port Arthur were black, and super friendly. As smelly and as homeless as I look, women in grocery stores asked me about what I am cooking for dinner, tough looking guys in lowered cars blasting music stopped and ask me about where I am from.

In Beaumont I slept in the park next to the police station and was devoured by mosquitos every time I left my tent. Mosquitos are so localized in the grassy areas out here that I ate a can of cold beans in my tent to escape the wrath. For the second night in a row, it poured all night, I slept in bouts in a 80 degree steam bath under the tent fly.

The Gulf of Mexico

High hopes! I will be officially out of Texas today! All I have to do is ride to the coast, and take the side roads to Louisiana. Easier said then done. I rode 30 miles on the interstate with a constant Mantra about cars abd trucks ” That was close, its ok, keep pedaling, you are almost there”. I struggled at times to keep my bike going in a straight direction,and was thankful when I got to Port Arthur. When asking for directions I made the mistake of saying that I was going to “Louisiana”. “Oh you’re going to Louisiana, I have been there, this is what roads I take to get there” local after local told me. After crossing the suicidal “rainbow bridge” I pedaled 15 miles in the direction of the interstate. “FuCK”!!! “You have to turn around and ride that brige back out of town”!!

The rainbow bridge, the return side did not have a shoulder

At the apex shoulder not bad on way into Bridge city

After cycling back over the “rainbow bridge” I got back on the correct road and headed south out of Port Arthur. During my first 30 miles of Louisiana I encountered a 40 mph head wind and constant showers. I passed through Holy Beach which was leveled by hurricane Rita, and boarded the ferry to the city of Cameron, LA.

Before the storm, riding the ferry into Cameron

Levee and an old bridge

After perusing dollar general and buying a 2 dollar snickers ice cream bar I pitched my tent behind the local church. Rain soaked the rest of my dry clothes and I slept like a spider between the pools of water in my tent.

Gator season, I saw at least twice this amount dead on the side of the roads, these are killed ofr their tails and hide.

92% percent humidity! Once sweating your clothes don’t dry. When you get off your bike to ask for water people think that you fell into a pool! I am sweating so much that my saddle and handle bar tape are bleeding into my clothes and it looks like I poo’ed in my pants!

I am in Pecan Island, LA! The whole area is surrounded by swamps and marshes. Several years ago some of the locals broke a levee so that their houses would have an ocean front. I am heading New Orleans tomorrow, a few days in the French Quarter, and a stroll on Bourbon street will be my last resting point before heading off to Norway.