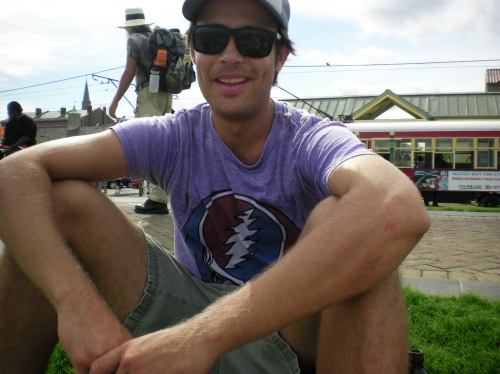 Dressed in my local Louisiana attire, the dead shirt caused a bit of a commotion as the night wore on

The trip to New Orleans was rather interesting. To avoid the interstate, I rented a Mazda 3 sports car to carry my me safely through Baton Rouge and into the city on a Friday night. Gaby barely fit in the back seat, and even though I am a specialist at fitting bikes into Mazda 3’s (old girl friend used to have one) Gaby just didn’t want to get into the back seat. Lots of repositioning the seats and getting grease on the interior, with a final push I got her to fit with the front wheel taken off. What a fun trip, bicycles, buses, moving vans and now rental cars! The lady at the rental office told me the local Cajun creole music station 101.1 I blasted the radio and I was off for New Orleans. My first encounter other than the small size of the driver’s seat was a 30 mile bridge that travels over swamps and marshes leading into Baton Rouge. There are gas stations and small towns that were essentially built-in the air above the marsh to accommodate the traffic.

New Orleans was a hoot! Public drinking and live music flooded the streets as I approached the town from the west side. What a distraction from the solitude of the road! A friend of mine flew in from San Fran, and we spent the weekend in the city. I found the French quarter a bit touristy for my taste, but was able to escape to the more local venues of Frenchman street. Walking throughout the quarter, I enjoyed the local fare from Po boys to Cajun catfish, and had plenty canned beers. 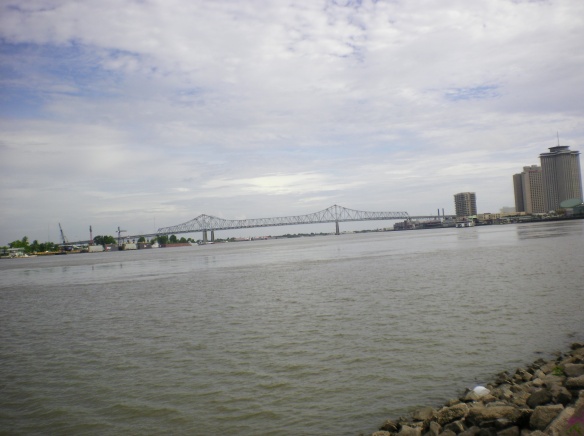 Bourbon street was surprisingly a lot like Halloween in Santa Barbara. SB really is the Mardi Gras of the west. The Mississippi is beautiful and I can finally say that I am on the East coast. I watched boats for more than an hour travel up and down the river and listened to live bands play on cruise liners in the sunset. My impression of the French Quarter was that it consists of about 80% tourists, 5% homeless and 15% locals(all the employees). The near by Frenchman street offers a great mix of local culture and great music, where Cajun bands can be found playing across the street from the local jazz venue. The city becomes a rather familiar town after a few drinks and a walk around the block, and it is nice to stumble back to a hotel room rather than pitching the tent for the night. The French Quarter itself is rather small and is only about ten square blocks. 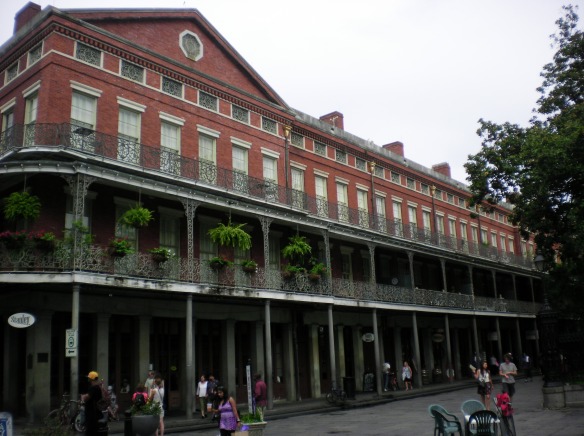 After a blur of a weekend I said goodbye to my friend Alexis and sipped a beer on the banks of the Mississippi. I picked up my bicycle from storage and had an hour long conversation about Islam with a security guard. It is currently Ramadan and my friend Carlos told me about what his practice means to him. Born in Panama city, and raised Catholic he told me that he never had the opportunity to contemplate other religions. I told him about my experiences visiting the mosques of North Western China, and crawling into a holy Muslim cave in Kashgar. We shared very similar views regarding spirituality and I hope to have the opportunity to connect with him in the Middle east.

After retaining water for a few days in Louisiana my ankles are back to normal and I am ready for the road again. I blame the two cans of cold Campbell’s soup in my tent the night I camped outside of the church. Either way I was a bit stiff for a while and felt a few pounds heavier, after some rest, electrolytes and a lot of peeing my feet feel nimble again.

I cycled out-of-town and am now writing from the India Hostel on Canal street. The party rages on over here, and I can honestly say that I am one of the only Americans staying here this evening. French, German, and English accents echo through the courtyard and I prepare myself for a bunk bed near an air conditioner, oh boy. Tomorrow, after a gourmet bisquick pancake breakfast I will pedal to the state of Mississippi. Good night friends!

2 thoughts on “New Orleans, Baton Rouge and a pair of swollen ankles”