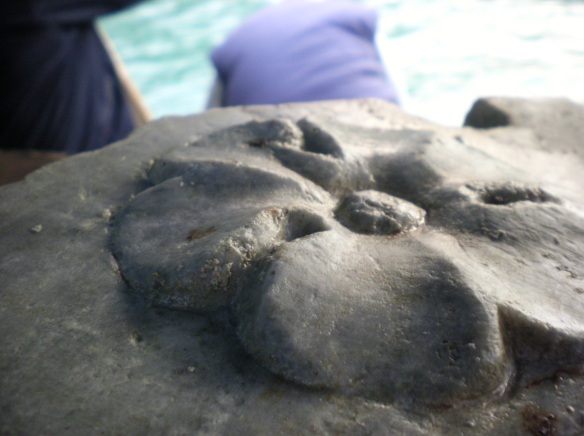 Stone fragment dating back to the early Roman period of the island, 4th or 5th century

The cold, calm waters between Italy and Croatia are home to many ancient culture

A departure from my normal cycle touring diary, this post documents my first archeological expedition off the coast of the Krk in Adriatic sea.

Last Summer, while swimming off the coast of the island, Krk. Two German tourists spotted what looked to be an underwater cavern filled with pottery and other objects a few hundred meters off shore The tourists told informed the local authorities who eventually brought the news to my host in Krk, Nino Bok (head of archeology on the island). Nino then submitted all paper work to begin an underwater excavation of the site. Lucky for me it took the Croatian government several months to process the paper work and he wasn’t given official permission until a few weeks ago.
Having been granted permission to excavate, Nino charted a boat, and assembled a crew of 5 divers to uncover the remains of the ancient site. Since staying on the island Nino and I have developed a sort of historical bond and he invited me to join him and the crew in the excavation. 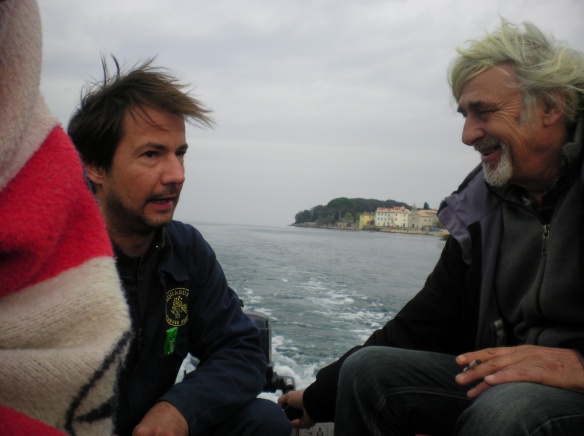 Nino (right) and Marko roll cigarettes and discuss the excavation over the roar of the 2 stroke dingy engine.

Divers and archeologists busy at work upon arrival.

Yesterday after spending the weekend at the retreat house, I boarded a dingy with Nino and Marko (head of the diver crew) and traveled a few km to the site. Patiently waiting at the site was the Bela, the crew of 5 divers and the captain. Climbing aboard I was overwhelmed with the amount of equipment; scuba tanks, wet/dry suits, generators, and an assortment of chemicals used to clean the generations of age off of the artifacts. Also, making communication bit difficult, was a high-powered used to pull up sand and small rock materials covering the site. The divers took 2 hour shifts and chain smoked when aboard.

Diving materials. The water was close to 8 degrees centigrade, requiring dry suits and extra gear to provide warmth while working in the depths for 2 hour intervals 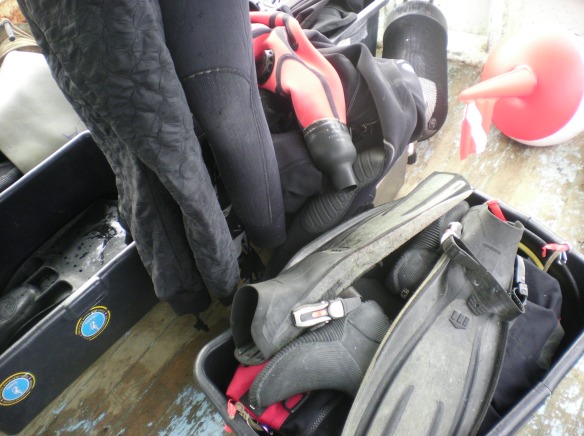 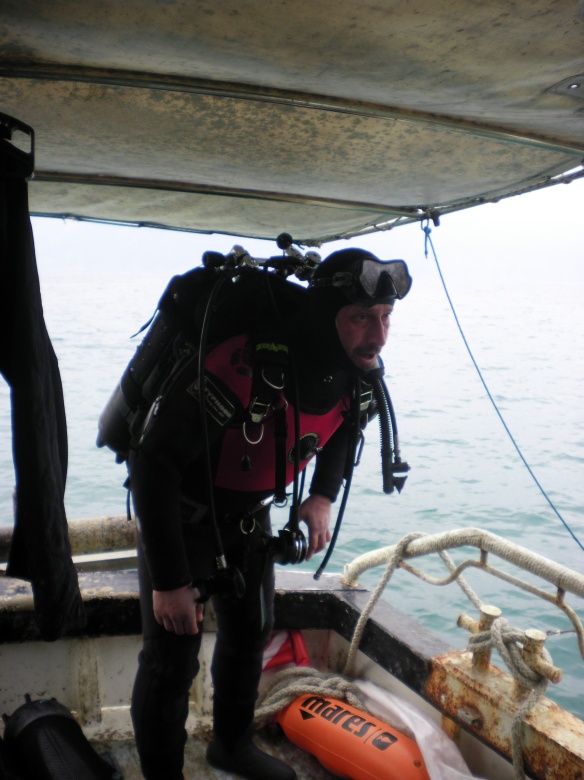 The oxygen tanks weight approximately 60 kg! I was not surprised when this guy introduced himself as “Riba” aka fish in Croatian

Meanwhile in the galley the cook/captain was whipping up stew, marinating beef and chasing shots of rakija with honey water. I joined the cook for a quick snack and a few rounds, then made my way back to the join the divers as they brought up a large bag of objects from the bottom of the ocean.

A complete manic, the cook/captain has traveled the world by boat, seeing almost every significant port, only to wake up hungover and broke the next day. His favorite port is Singapore, and has more stories then time to tell.

The bag was filled with pottery shards, rock sculptures and small bronze fragments. The most notable items of the day were a pre-Roman pagan coin circa 2nd century, and a stone fragment with a carved flower (dating back to the 4th or 5th century). After all the items were brought aboard two professors from the University of Zagreb arrived to inspect, and photograph the items.

After hundreds of years residing on the bottom of the Mediterranean, the artifacts are brought to the surface

What’s this? Could it be a coin? Lets drop it in the acid bath and see if it cleans up!

After a few minutes in the acid bath and a closer inspection reveals an old bronze coin with pagan symbols.

Close up of the coin 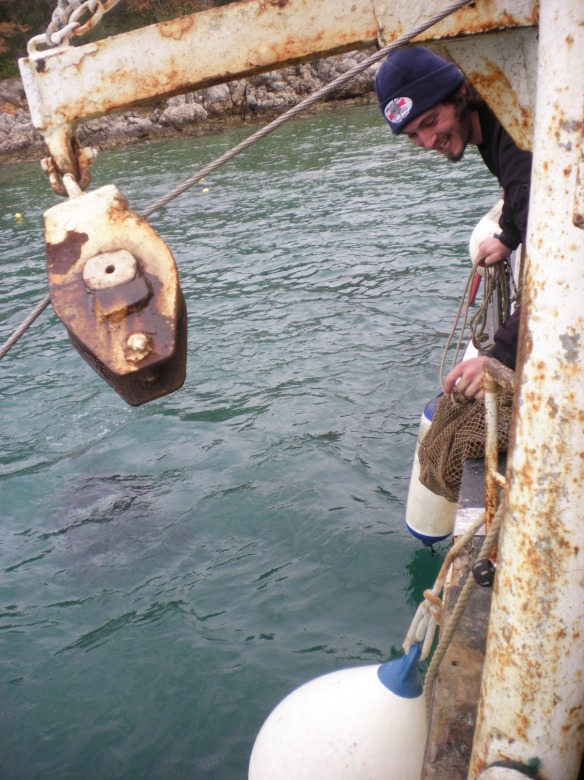 “Hey there is something else coming up”! 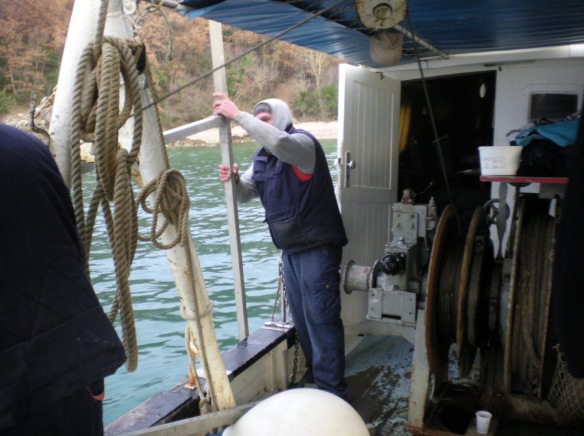 That’s just our lunch, clams living near the site

After a motivational speech and a few pictures everyone gathered in the galley for BBQ meat, clams, rakija and a celebratory bottle of white wine courtesy of Michele Ferrari* (Lance Armstrong’s Doping Doctor).*(Apparently the captain and Ferrari are good friends and travel the seas together in the summer time).

After the festivities, all gear was packed up and the long trip back to port began. While the rakija and wine were being passed around the ship drifted off course, and the captain pulled out ancient 18th century compass, found off the coast of Italy, to guide us back to port.

“What is a cyclist on the way to China doing on our excavation”? “Lets drink to it”!

Finally reaching the port I joined Nino for a meeting with the sponsors and finally arrived back in Omisalj in the late evening. Exhausted and a bit sea sick from the long trip back I fell asleep only to be woken up a few hours later with a terrible headache.

Artifacts retrieved from the underwater depths

Unfortunately I had forgotten that a few days earlier that I filled my water bottle with olive oil. In my desperation to find a drink of water I took a huge gulp of the warm green fluid and puked my guts out. Overall a great time at sea!!

1 thought on “A trip to the depths of the Adriatic”