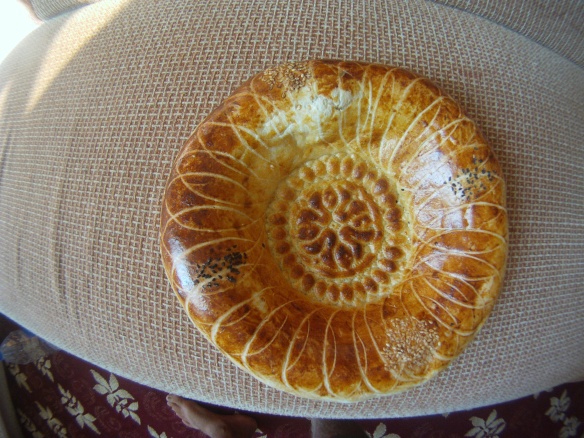 A work of art, and a gift from the baker fresh Uzbekistani naan

I have just crossed the border into Kyrgyzstan, and am in many ways sad to leave the remote country of Uzbekistan. Hours ago I left a beautiful Uzbekistani woman behind, probably never to return or see her again. The last ten days have been full of challenges, and random encounters with spiritual individuals. My health has not been good as more than once now I have been sick from consumption (Vodka) and roadside food stands. It seems that on almost every opportunity imaginable (gas stations, super markets and restaurants) I am met by friendly locals who quickly pull out a bottle of local vodka and start filling rice bowls. No sipping,  and your only hope for survival is that there is plenty of bread on the table. 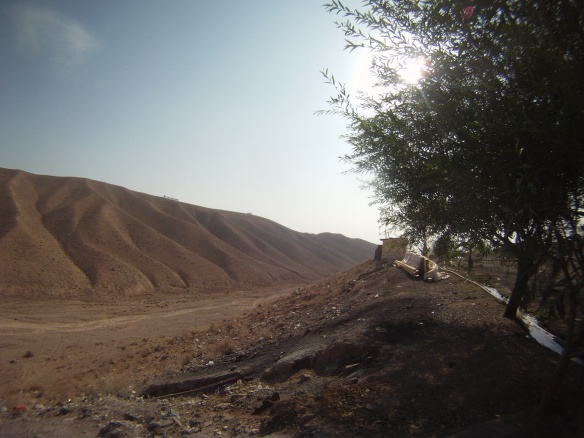 Dry, desolate mountains as I pedal down through the Fergana valley

Uzbekistan, has by far the most abundant use of bicycles. Children, not yet tall enough to reach the seat or make it over the top tube, pedal with body slanted to one side, trying to keep up with me as I pass. Teenagers, and young adults pedal their girlfriends and wives on the rear rack home from school and to work, and older men transport propane tanks, and other various goods to and from their homes. Like all Muslim countries I have traveled to, there is a noticeable separation between the sexes. Restaurants, tea houses, roadside café’s are all only frequented by men, and very rarely do I see couples in public. Women out here work in the cotton fields, produce markets and pharmacies. 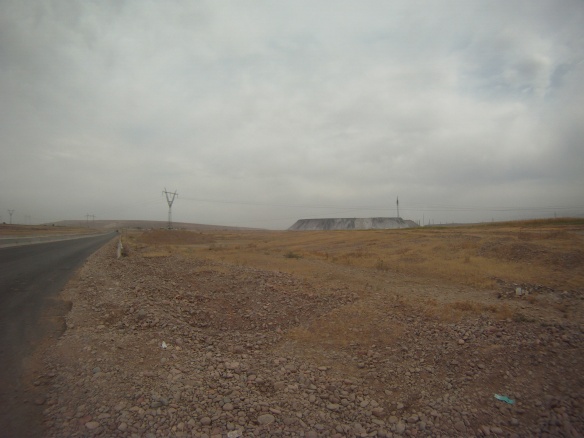 The eastern side of the large country was full farmland and plenty of open fields.  Each night I camped thinking I was alone only to be surrounded hours later by a herd of sheep or cows, followed by a friendly shepherd with a half empty bottle of vodka.   I will truly miss Uzbekistan. It has the most beautiful and hospitable people you could image, where it was not uncommon to have your groceries purchased by a stranger or have your panniers filled with fruit from a smiling farmer who refuses any money. 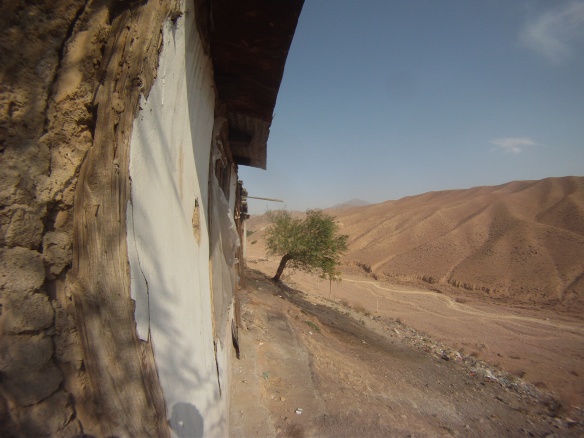 I now prepare for the steep, cold mountains of Kyrgyzstan. Fall is in full swing here and two weeks ago the mountains were covered in a half a foot of snow. Once again my panniers will be filled to the brim as I pedal towards the Tajikistan border in hopes of viewing the legendary Pamir mountain range. China does not allow cyclists to pedal from the Kyrgyzstan border to Kashgar, so there is no point on entering China yet. I plan to spend 3-4 weeks cycling the remote regions then flying to Japan in mid-October. I will return again to Kashgar in the early spring of next year hopefully with a Pakistani visa, planning to pedal the Karakoram mountain range into the legendary Kashmir region.  -Julian

My forbidden shish kebab evening followed by stomach sickness was definitely a story to tell, for those of you who are sensitive to bodily functions such as diarrhea and vomiting you may want to skip the end of this post….. So pedaling through the small city of Ohangaron (About 350 km from the Kyrgyzstan border) I quickly befriended the local baker, who after teaching me how to make the local bread, told me about a super cheap hotel. I personally do not like hotels or guest houses, but in Uzbekistan every tourist must register at a hotel every 3 days, otherwise a fine of up to 8,000 USD can be applied! (This is another story as some hotels will often try to blackmail you if you do not have the correct amount of registration slips in your passport, I only registered a few times but was able to avoid trouble).  After a night around town, and eating several lamb kebabs at the roadside grill I found the mentioned hotel. It took me close to an hour to bargain the price down, and half way through my stomach started rumbling in an all too familiar way. At least I will be in a room with a toilet I thought and got a room for $3. After getting Gaby and all my panniers up to the second floor, I fell asleep.

Hours later I woke up with a fever, and terrible stomach pains. The whole hotel was dark, and it seemed that the power was out. I scrambled around trying to find my headlamp and my room key and while holding back the pain fumbled for several minutes on the 1920’s style hotel key, trying to unlock the door. After finally getting out of the room and fumbling again to lock the door, I searched the second floor for the toilet. No bathroom. The toilet was all the way down two flights of stairs and through a long corridor. Once there I learned that not only was the power out but so was the water!! The water must have been off for a while, maybe the hotel had no water as all the squatting toilets were filled with excrement. The sight of the bathroom, accompanied by the smell made me vomit and I decided I would have to be creative and make something work out in my room, as the bathroom was too far and too disgusting. Luckily, my room I had a small balcony, and earlier that evening I had purchased a large 5 liter bottle of water. I dispersed the water to a few bottles and made a make shift toilet by cutting off the top of the 5 liter plastic bottle. I used a few books and a piece of wood found under the bed to elevate my feet, and there it was a water bottle toilet.

All night I prayed that it wouldn’t fill up as I made countless trips to the balcony, my stomach was so painful. I had plenty of antibiotics in my panniers but I always try to avoid them and continue to do so in this situation. By early morning the fever and diarrhea were gone but now I had close to 3 liters of excrement in the bottle on the balcony. No matter how terrible the hotel was, I would never leave that for someone else to deal with. Disguising the bottle by putting it in a plastic bag I tip toed towards the bathroom but was met halfway by hotel staff who thought I was trying to steal “things” out of the room or hotel. I am not sure exactly what this lady was saying but she wanted to see what I had in the bag! “Can’t you smell it” I said and she looked inside, she made a stinky like face then walked away, I guess a 5 liter bottle half filled with diarrhea is nothing shocking in Uzbekistan.