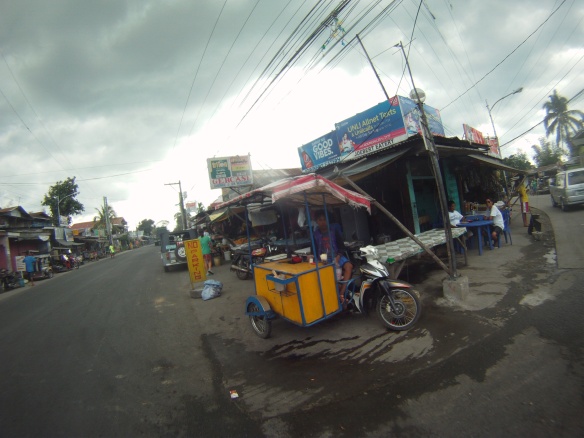 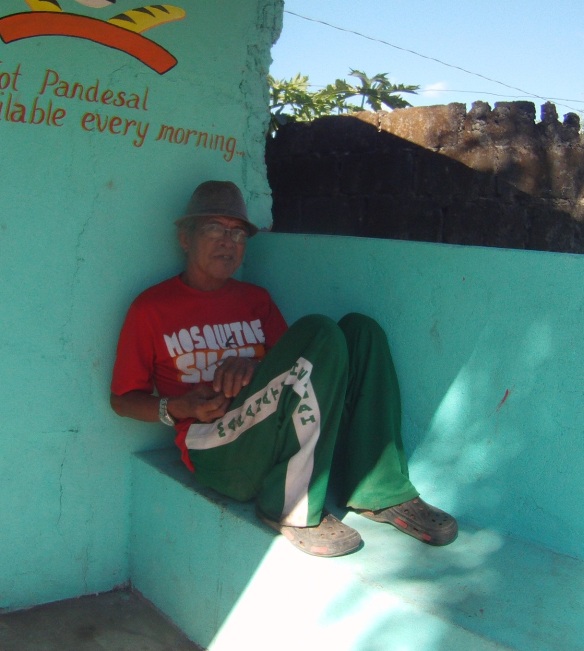 Local lounging at the bakery

Manila is by far number one on my list of worst cities to cycle. On my last day I decided to make a small trip north of downtown to the Chinese district, hoping to meet some interesting Chinese-Filipinos. Little did I know that I was about to pedal through one of the most polluted and dense districts in the city. The road suddenly became a frozen maze of jeepneys, pedicabs, and street vendors. Continuing was so difficult that I decided to forget about visiting my potentially long-lost ancestors and return to a quieter region of the city. 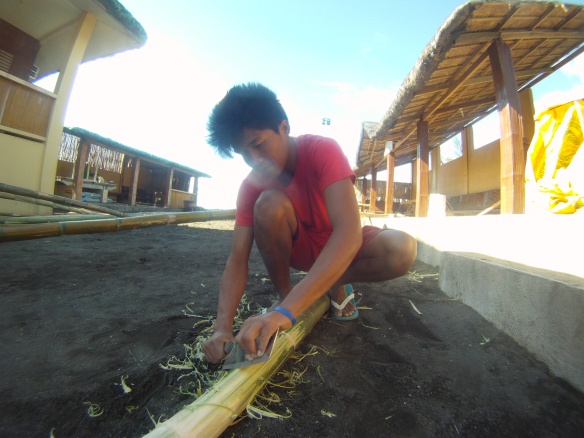 Sanding the bamboo clean for a kubo, bamboo house. This boy spent hours sanding with a butcher knife 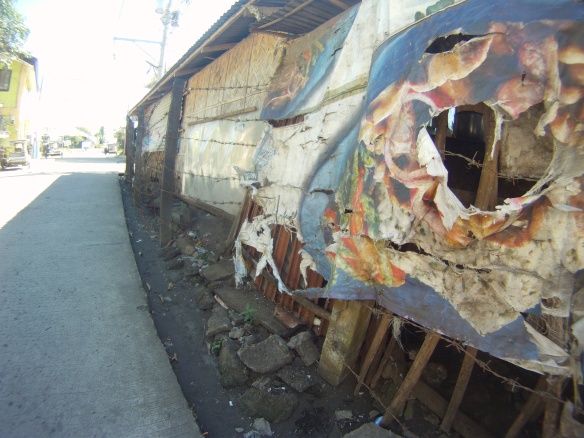 The conditions were much similar leaving the city, that morning while packing my bags I made a resolution ” Even if it takes me all day to get out of Manila, I am not going to give up”. 6 hours later, with lungs full of exhaust and half covered in silt and dirt I reached the city limits. I quickly learned that one big difference between the Philippines and other countries is that there are no address numbers! In my 6 hour effort to get out of the city I got lost several times and tried looking up my location at a local internet café hopeless! Most locals have also never ventured outside of their barrio which means that they are of little help. 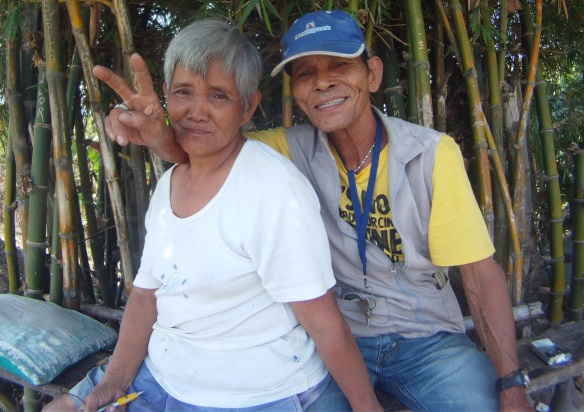 So often in my travels I have felt that if I only had a better understanding of  the local language I could figure out where I am trying to go. Here in the Philippines almost everyone speaks some English but there is nothing that they can say to help you.
The heat was intense, and the humidity only made matters worse. I had forgotten to wash my new clothes and my sweat seemed to just stick to my body rather than be absorbed into my clothes. When the city faded away I pedaled through village after village perched on the edge of a thick jungle. As the sun began to set I thought about my plans were for sleeping, I would have to venture far into the jungle to avoid being seen.

I climbed a steep mountain and near the top I stopped for a drink of water, looking to my right I saw an old man with kind wrinkled eyes. “Sleep here” they seemed to say to me, I walked over and introduced myself.
“My name is Cristos” he said and if you like you can camp here tonight….you and your bicycle will be safe”. I was relived and after a long day felt that I could let my guard down.

A car pulled up, and a group of five walked out Cristos was suddenly busy looking into the palms of their hands and joking around. I noticed that there were several couples sitting in chairs and benches waiting to be seen my Cristos, and I guessed that he was some sort of important doctor or tribal elder. Soon I was told that he was a famous arbolario, (fortune-teller). I talked with several of the couples waiting for their turn and watched as Cristos took their hands in prayer position and slowly blowed on them whispering something to himself.

The sun began to fall and soon all the clients had been seen and I was left alone with Cristos and his wife Elle. I was invited to dinner and welcomed into their Kubo, bamboo home. They told me that they had 5 children and after watching them grow decided to move to the jungle, where Cristos built their bamboo retirement home. We ate rice and deep-fried fish with papaya sauce.
“I looked at your hands when we met” Cristos said.
“You are a good man”, ” I hope you stay will us again when you return again”.

Riding in Cristo’s tricycle we traveled through the dark jungle roads to his family home in the village. The lights from the bike seemed to painted the road green around a dense bamboo jungle. We turned down a broken muddy street and continued through a long narrow alley, finally reaching our destination. It was an old brick house that looked as though it had been built the same year of my father. The house consisted of two rooms a kitchen and living quarters, with a bathroom and shower in back. The concrete walls and floor were oily and worn. “I will call my family, wait here a few minutes” he said a few minutes later he returns with a group of about 30 people. “This is my family, please say hello”.

An hour later I return with Cristos to his bamboo kubo. He offers me his bed, but I declined and pitched me tent in his bamboo forest. I  listen to the wind in the leaves, and the sound of a jungle around me.

The next day Cristos reads more into my future and tells me not to go to Mindanao ( A large island in the south). He tells me that his father was also an arbolario, and that ever since he can remember he has been able to look into the future of others. More cars pulled down his driveway and Cristos is suddenly busy with clients. “He does not charge money for his services”  his wife tells me “If he does he gets sick”.
I leave the bamboo house in good spirits and continued on through the tropical mountains to the port city of Batangas. There I carry Gaby down a long skinny walkway onto a local ferry that takes me to Puerto Galera, a famous diving resort. While on the ferry I strike up a conversation with a Dutch man who asks me why my clothes are so dirty. He says that all tourists here have clean clothes and don’t look quite as tired as I do. I tell him about my bike trip and he invites me to at his beach house. 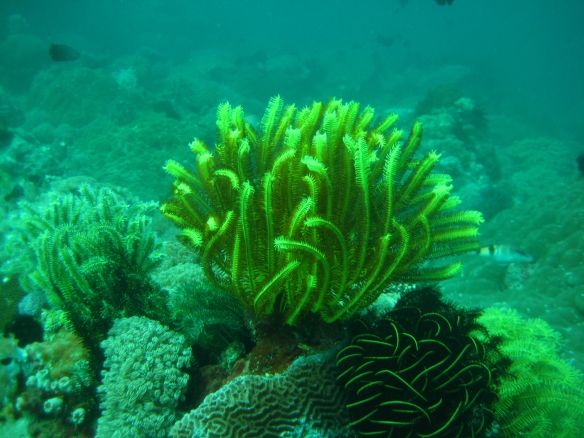 Scenes from the coral reef dive

I soon learned that he is a scuba diving instructor who is in the process of expanding his business to Puerto Galera. ” I mostly teach the locals” he tells me. ” I first teach them to swim because 80% of Filipinos can’t swim, then I teach them to dive”.
“It’s a really rewarding experience” he tells me “as long as you have patience you will always have clients”.

View from my porch camping spot

Camping on his porch overlooking the sea we became pretty good friends and the next day he asks me if I would help him paint his kitchen in return for  taking me diving. I accepted but with a little resignation as scuba diving has always seemed a bit scary to me, but I would be stupid to decline. 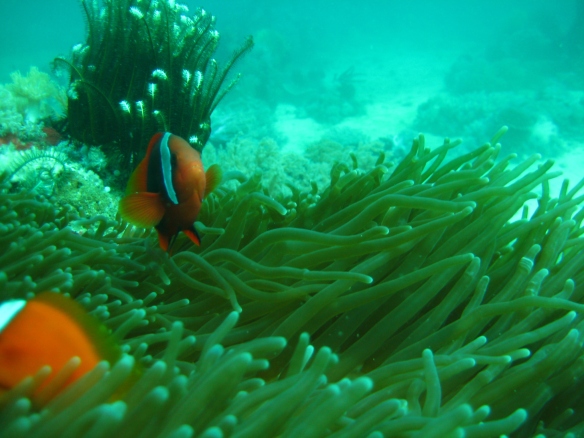 On my first dive all goes well except my tank runs out of air! Luckily I am only about 4 meters below the surface and can make it to safety. When I arrived at the surface I can barely float with all the weights, and without air in my tank I couldn’t fill my buoyancy jacket. Jeroen comes to the rescue, and within a few minutes I was back on shore. “Next time I will give you a tank gauge” and apologizes.

We dive again the next day, this time at a coral reef off the coast of Sabang beach. I go to a depth of 15 meters and swam with turtles, and rest under coral trees on a white sand ocean floor. It is amazing to be that deep under the water and feel completely relaxed. From the sea floor I looked up trying to see the surface, only to see a world of water around me. Fish were flying above me and all around and I was swimming through a magnificent garden of coral. 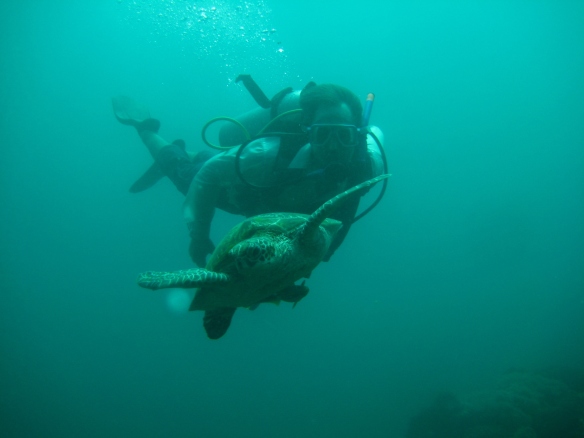 Getting on the road again tomorrow! I hope to keep in touch with Jeroen and return to dive again, or at other locations in my travels. The island of Mindoro (my current location) seems to have a lot less traffic and tomorrow I will cycle passed a famous waterfall.

2 thoughts on “Opening up”